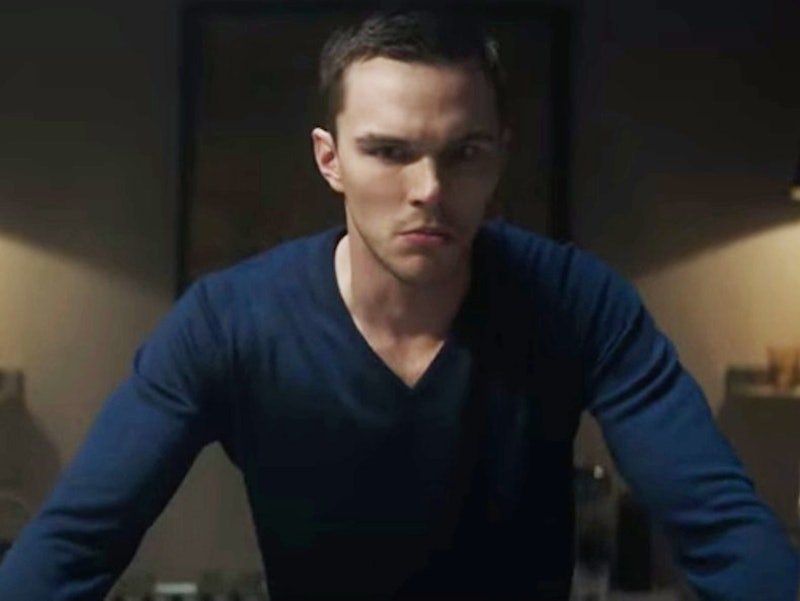 Just when you thought it was impossible for anyone or anything to quash your crush on Nicholas Hoult, the new released Kill Your Friends trailer is here to do just that. Kill Your Friends is Hoult's upcoming project, premiering at Toronto International Film Festival in September and being released to theaters for the rest of us peons on Nov. 6. In it, he plays a British A&R man — it stands for "artists and repertoire," the guys responsible for finding new talent for the label — who is placed under such pressure by the peak of the Britpop craze that he goes to... um... pretty intense lengths to beat his colleagues to the next hit. As you can probably tell from the title, and what you'll be able to tell from the trailer once you watch it, that seems to mean Hoult's character is willing to murder some people. Presumably even his friends. (Ah!)

And while the movie looks great, all the acting checks out, and I'm really looking forward to seeing it, one thing it's definitely making me do is rethink my romantic feelings for Hoult. Typically, I'd say that anyone Jennifer Lawrence puts her romantic seal of approval on is good enough for me (or way better, depending on my level of self-confidence for any given day), but, after watching Hoult's character throw records, have sex, do drugs, and full-on strangle James Corden with a belt from behind, I'm starting to question my own judgment. And you'll probably question yours as well, so watch the following trailer at your own risk.

Hey, don't say I didn't warn you! If you're looking for a new crush, can I recommend James McAvoy? He's always been a standby for me in times of daydream hardship.

More like this
This 'Hunger Games' Alum Will Star In A New Medical Drama Titled 'A Mistake'
By Alyssa Lapid
One Powerful Quote In 'Doctor Strange 2' Is Going Viral On Twitter
By Alyssa Lapid
10 Must-Read New Books Out This Week
By K.W. Colyard
'Bridgerton' Star Nicola Coughlan Confirms Season 3 Will Focus On Colin & Penelope
By Grace Wehniainen and Alyssa Lapid
Get Even More From Bustle — Sign Up For The Newsletter