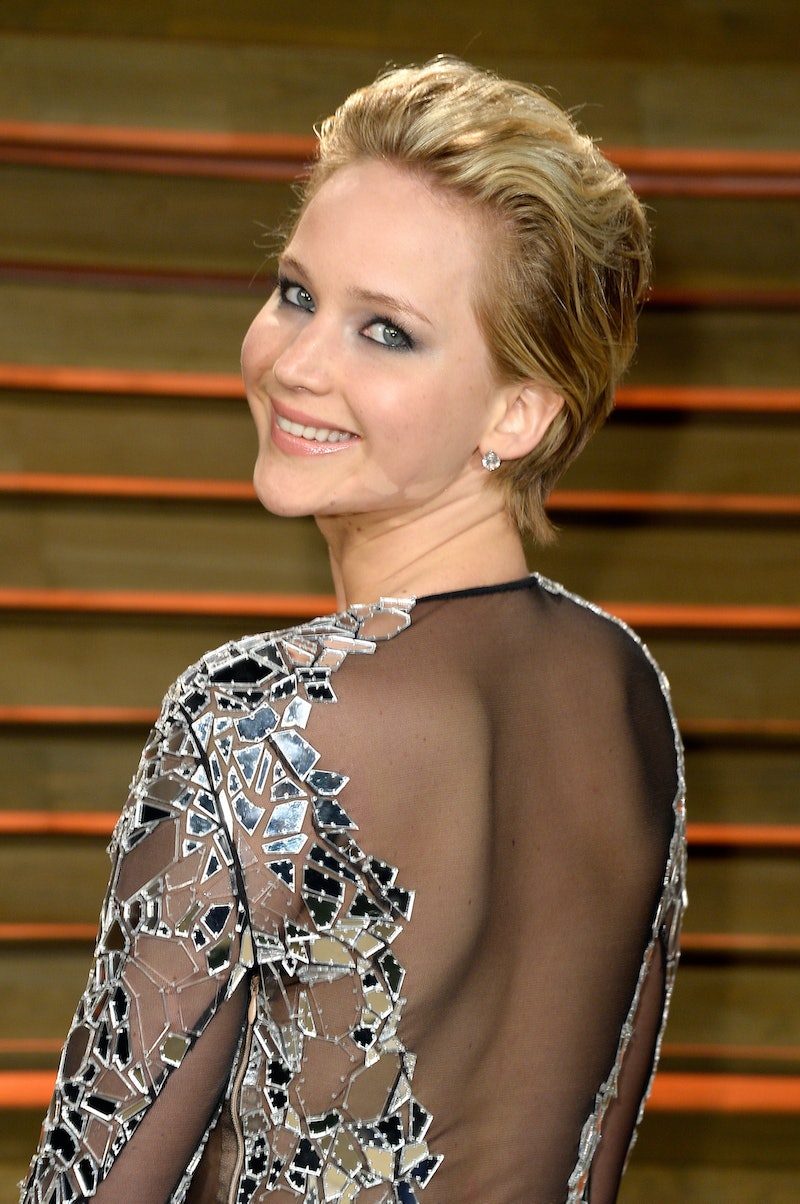 When the first line of an interview with Jennifer Lawrence is "I'm pregnant," you know it's going to be a good read (disclaimer: she's not pregnant. She has her period, and is not happy about it at all.) Still, even though the piece certainly contains no shortage of great one-liners ("I think he needs to tweet, like 'Let the panda bears die'") and interesting tidbits ("custom-monogrammed by a friend with Lawrence's nickname Katpiss Neverclean"...), the X-Men star also reveals her thoughts on deeper, more serious subjects throughout. Most notably? Lawrence's smart, empowering views on maintaining her relationship with boyfriend Nicholas Hoult, whom she's been dating on-and-off since 2011.

Asked about the challenges of a long-distance romance, Lawrence says:

She adds that instead of keeping in constant touch through Skype and other methods when they're apart, the couple opts for less frequent communication:

"When we're busy, we agree to mutually ignore each other. Not completely, but neither of us gets mad when the other doesn't text back or call. Life's super-busy. Obviously you know what they're doing, and you trust them. We're so young that it would almost be like if we lived in the same city, what would happen? We'd be living together. At least this way he's in the same boat as I am: We can both go out and have our own lives and know that we have each other."

Lawrence's views might be surprising, considering both actors' celebrity; when your partner has that many adoring fans, do you really want to not know what they're up to all the time? Still, it's pretty smart, not to mention empowering. Lawrence seems to be of the "he has his life, I have mine" mentality, which, at her and Hoult's ages (she's 23, he's 24), makes perfect sense. So many couples at that period in their lives feel the need to rush into things, immediately merging their lives together (looking at you, Kristen Stewart and Robert Pattinson), despite that not necessarily being the healthiest thing to do. Even those in the best relationships often seem far too co-dependent instead of taking the time to find strength in their individuality. Lawrence, meanwhile, seems to realize that it's possible to be in a healthy, committed relationship while still maintaining a life separate from her boyfriend's.

And clearly, that attitude is working. Although typically silent about her relationship with Hoult, Lawrence opens up in the Marie Claire interview, making it clear that the couple are as happy as ever. She compliments him ("humor and intelligence are key. Looks fade very quickly. I love a unique mind. Somebody who's his own person"), frets about his safety ("when I'm worried about something, like if Nick or anybody in my family is on a plane, I'll say a prayer") and makes fun of his Twitter usage (see the "let the panda bears die" comment, above). And, in typical Lawrence fashion, she even over-shares:

"Given that she and Hoult kindled, and then rekindled, their romance on the X-Men sets, I can't help asking if the mutant lovebirds have ever gotten, you know, freaky while Lawrence was sporting that elaborate blue makeup. 'Ha, ha,' she laughs, shaking a finger at me. 'No comment.' Then she gets a slightly devilish look on her face. 'I will say,' she allows, 'it's complicated to explain touch-ups when you come back from lunch …?'

And we're back. It wouldn't be a Jennifer Lawrence interview without at least a few comments about sex, vomit, or any other probably-not-meant-for-the-public topics. It's nice to know, though, that those aren't the only views Lawrence feels are important to share. Sure, the TMI soundbites are fun to read, but we'll take strong, feminist relationship advice over quotes about fulcers any day.

More like this
5 Wild Theories About Miley Cyrus’ “Flowers” Music Video
By Jake Viswanath
Vanessa Hudgens Is Reportedly Engaged To Cole Tucker
By Jake Viswanath
RHOP’s Robyn Dixon Explained Why Juan Paid For Another Woman's Hotel Room
By Brad Witter
Pamela Anderson’s Dating & Marriage History Could Be Its Own TV Series
By Jake Viswanath
Get Even More From Bustle — Sign Up For The Newsletter
From hair trends to relationship advice, our daily newsletter has everything you need to sound like a person who’s on TikTok, even if you aren’t.