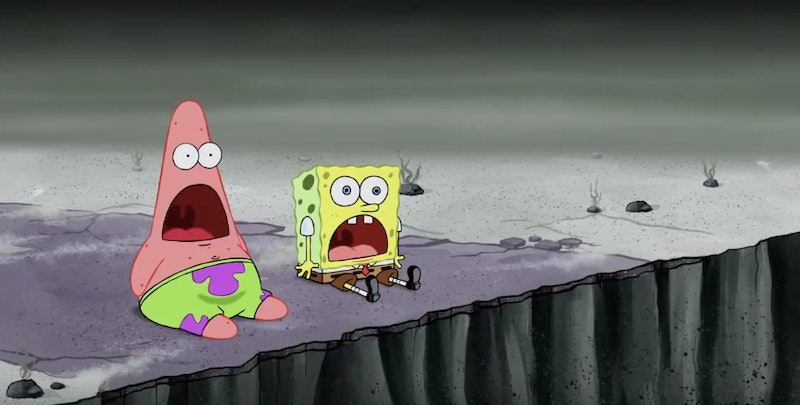 In the war between Nickelodeon and Cartoon Network, you all know I was a tried and true Nickelodeon girl. In the early '90s, you always knew you were getting some top quality 'toons from that channel every Saturday morning... or, well, really any day that ends with "y." But, in spite of its seeming perfection, sometimes consistency and continuity is just hard for writers. That's why, if you look close, you'll spot a smattering of plot holes in Nickelodeon cartoons that are a little hard to ignore.

Now, not a lot, mind you. The beauty of ridiculous animated features is that, very often, you can look at logic-breaking moments and literally write it off as, "Well, it's a cartoon." Like for example, Catdog is sort of an anatomical impossibility, and, therefore, shouldn't be able to survive in the first place. But, as viewers, we accept its inexplicable physiology from the get-go. It's just how it is.

But, other times, there are lines and moments that warrant a slight to deep side eye (yes, I'm measuring side eyes now), and, for all those instances, attention must be paid. So here are just a few plot holes in Nicktoons that you may (or may not) have a hard time patching up.

1. Doug And His Stay In Bluffington

An early episode of Doug entitled "Doug Is Hamburger Boy" includes a flashback of Doug and Skeeter laughing at the wonky Honker Burger mascot. It's something he remembers every summer, apparently. Except, Doug as a series starts when Doug moves from Bloatsburg to Bluffington that year, so, unless the pilot episode started in, like, late August (not impossible based on when it debuted), this would've been Doug's first summer. And even in that case, he'd only have the one.

This one's a bit convoluted, but the general premise is this. There's an episode where Timmy has to go back in time and help his dad win a race, but, since he previously convinced his adolescent father to not participate, he has to take his place. Sadly, Timmy is athletically challenged, but he uses his heat vision, a previous wish, to melt everyone's sneakers to the ground and win. However, Da Rulez previously stated that Timmy isn't allowed to use his wishes in competitions, so what the heck?

At the end of the Rugrats episode "Real or Robots," Stu is tucking Tommy and Chuckie in and he says, "Good night, Chuckie, your mom and dad will pick you up in the morning." Um, Chuckie's mom is dead, and that mother's day episode literally tour my heart in two. Then again, "Real or Robots" is a very early Season 1 episode, so clearly things haven't been established yet. Because, otherwise, that's kind of a mean thing to say.

In the classic Hey Arnold! episode "24 Hours to Live," Helga is counting down the minutes until Arnold gets pummeled by Harold. At one point she says he has, "22 hours and 46 minutes" until he dies. Then, when he talks to his grandparents briefly and walks upstairs he has, according to Helga, "22 hours and 14 minutes." Except, the entire show is like 22 minutes long, so we know damn well all of those things didn't take half an hour.

5. Ginger And The Forgotten Tiff

As Told By Ginger didn't skirt around the drama of adolescent romances, and said adolescent feels caused drama not only in lives of Ginger and co, but in the actual plot. See the three parter Summer at Camp Caprice for more deetz. However, one of the weirdest plot holes, comes in the form of "Wicked Game," an episode which has Dodie and Marcie attempting to break up Ginger and Darren. There are other factors involved here, but the point is, BEST FRIENDS DODIE AND MARCIE ATTEMPT TO BREAK UP GINGER AND DARREN, and there is no fall out seen in the next episode, or at all. It's never mentioned again.

All things considered, there was a substantial seven month gap in between episode airings. As Told By Ginger was in its final season, you know how things get. But there feels like a missing link there.

6. Spongebob Squarepants And The Mystery Of Sandy Cheeks

In the episode "Pranks A Lot," Spongebob and Patrick get their hands on some rare invisibility spray and decide to pull pranks on everyone, pretending to be ghosts and what have you. The weird thing is, when they go into Sandy's treedome, the outline of their sheets (particularly Patrick's) show they're not wearing water helmuts... which they need to breathe in Sandy's house. But, then, when Sandy runs away from them, there are bubbles implying there's water, but Sandy needs air to breathe. What is happening to other otherwise dry treedome?