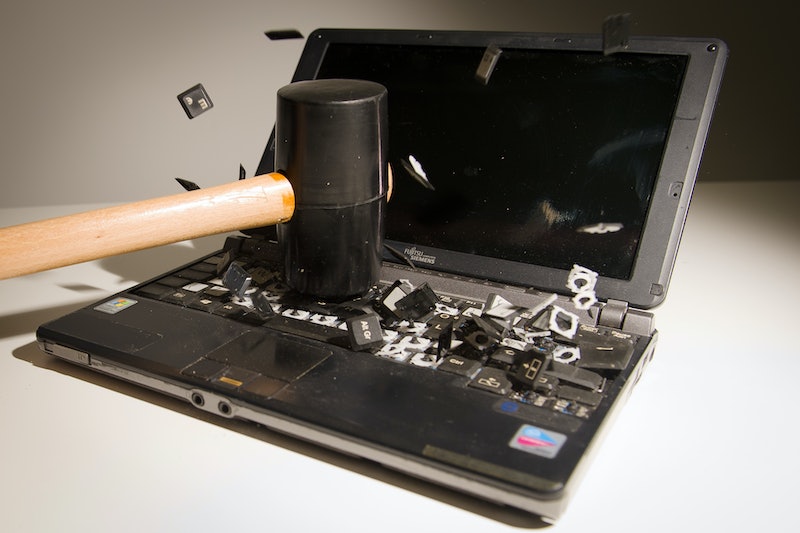 On Monday, Toronto police announced in a press conference that they believed two people have killed themselves over the Ashley Madison hack. Police are investigating to see if the hack was indeed a motivating factor in the suicides, but the department rightly told reporters that the nature of the site is "of no interest to us as the investigative teams." Why don't the investigators care, you might ask? Why doesn't their opinion of the suicide change if those who killed themselves were using Ashley Madison — an infidelity website — to cheat on their wives? Probably because it's none of the investigators' damn business. Just like it's none of the hackers' damn business, and none of our damn business. If the suicides were the result of the Ashley Madison hack, then they are a sad and extreme example of why privacy is such a pivotal part of U.S. citizens' rights.

The hackers, who go by the name Impact Team, stole Ashley Madison's user database in July, and threatened to release the information if Avid Life Media didn't take down the site and its sister site, Established Men. ALM didn't comply, so the hackers published the account information of 33 million people, which included email addresses, full names, physical addresses, and every credit card transaction those users made over the past seven years.

Since the hack, some people have actually rallied around the hackers, suggesting that cheaters deserve to have their wrongdoings exposed. But what these people don't understand is that they are at risk of being attacked themselves. The Ashley Madison users weren't doing anything illegal. Many people may find their actions morally abhorrent, but a wrongdoing does not justify a violation of privacy. Even when a person's wrongdoing is illegal, police often need a substantial amount of evidence that indicates such activity before they can curtail their privacy rights — by searching someone's home, for example.

If you want to condemn what the Ashley Madison users were doing, I'm first going to call on that whole "those who live in glass houses shouldn't throw stones" mantra. Secondly, people who condone the hackers' actions should be prepared to have their own information exposed. When we say it's OK to expose people who are doing things that some find morally objectionable, we're opening up a huge can of worms that we definitely don't want to swallow. If you have an account with a private pornography site, then you're at risk of being exposed, and that would be totally OK to a lot of religious people who think pornography is a sin. Furthermore, there's a large contingent of people who think watching pornography when you have a spouse is not OK, but many people obviously do this. If you think that the hackers were in the right for exposing Ashley Madison users, then it's not a far logical jump to say that it's OK to expose subscribers of pornographic websites.

Separately, some of our fabulous fundamental rights in the U.S. posit that people remain innocent until proven guilty. But you know how in Law & Order, they have to throw out evidence if it wasn't obtained in a legal fashion? Well, that kind of applies here. Unless someone has committed an illegal action, or you have strong evidence that they've done something illegal, you have no right to violate their privacy.

This is why so many people have a problem with the Patriot Act. The idea that innocent people shouldn't have anything to hide assumes that you only deserve privacy if you have nothing to hide. But that's exactly what privacy is: the idea that there are certain things about yourself and your life that you would rather others didn't know. It's your right to divulge those things, or to discuss them with your spouse when you see fit. And if there are social repercussions to your actions — like in the case of infidelity, for example — then you will have to face them.

Our right to privacy is so much more than our right to keep secrets from other people. Privacy allows us to shape our decisions and control our lives — for better or for worse. When other people strip us of our privacy from some moral high ground, it sets a dangerous precedent for the future.

More like this
How The City Healed Five Years On From The Manchester Arena Attack
By Ella Glover
100 Clever Gifts Under $25 When You Have No Idea What To Get
By Maria Cassano
Using Your Pet’s Name As A Password? Here’s Why You Might Want To Change It
By Cristina Sanza
What Is “Night Luxe?” Breaking Down TikTok’s New Aesthetic
By Courtney Young
Get Even More From Bustle — Sign Up For The Newsletter