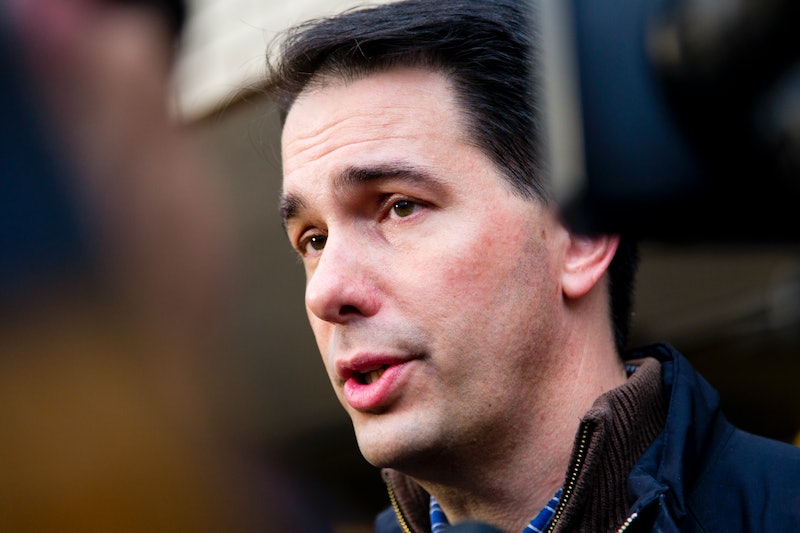 Wisconsin Gov. Scott Walker has been hitting the campaign trail hard of late in an attempt to bolster his slowly dropping poll numbers. After a stop at the Iowa State Fair last week to nosh on grilled pork chops and bat away protesters, the 2016 candidate made his way down to South Carolina this week to take care of some serious business. Walker's visit to the Carolina Pregnancy Center in particular had both his rivals and supporters talking, partially due to the fact that it was the same CPC that competitor Jeb Bush had visited just weeks ago. Given the center's radical practices and false propaganda, the stop was an unfortunate choice.

The Carolina Pregnancy Center has been criticized in the past for going beyond the usual dog and pony show — actively counseling women not to have abortions — and spreading false information to any woman who happens to walk through its doors. According to the center's website, over "80 percent of women who have had an abortion suffer from depression," a non-cited fact that that may have been falsely contrived from a study out of New Zealand's University of Otago which stated that abortion "leads to significant distress in some" women.

The center has also counseled men not to allow their girlfriends to terminate a pregnancy, claiming that it would simply make them "the father of a dead child," according to its website, and teaches parents of pregnant minors that the situation was "embarrassing" and "distress[ing]", but that they would "survive."

Walker himself has come under fire recently for his own commentary on women's reproductive rights. During the first GOP primary debate on Aug. 6, Fox News anchor and moderator Megyn Kelly pressed Walker on his "100 percent pro-life" abortion stance, asking whether he would allow for exceptions in cases where a mother's health was endangered.

"I've said many times that that unborn child can be protected and there are many alternatives that would protect the life of the mother," Walker told Kelly. "That's been consistently proven."

It was a memorable line, even on a night chock full of verbal tussles between Donald Trump and his fellow GOP-ers and statements about following God's presidential advice.

Most anti-choice advocates like Walker cite the 2012 Dublin Declaration as proof that abortions are simply not medically necessary in any case. The declaration, penned by a panel of palliative care nurses and a handful of doctors, and similar opinions have since been negated by the American College of Obstetricians and Gynecologists, who, in 2012 called such advice "inaccurate" and dangerous.

The center that Walker visited on Monday, along with other equally anti-abortion clinics, has also put a dent in the governor's credibility, as one Wisconsin Planned Parenthood director pointed out in an interview. Many of these clinics (often run by non-medical volunteers) counsel patients with abstinence-only information, she explained — an unwise practice, all things considered.

"If Gov. Walker was truly interested in preventing unintended pregnancies — not just promoting his ideological agenda — he would work with [pro-choice clinics] to enhance access to sex ed, birth control and other preventative health care services," said Nicole Safar of Planned Parenthood to The Capital Times. "Crisis pregnancy centers are not a solution for women in need of quality health care."

In a statement to Bustle on Monday, DNC Director Of Women's Media & Northeast Regional Press Secretary Kaylie Hanson noted, "Scott Walker always says he wants to bring Wisconsin to Washington, but if he does that, women are in trouble. From forcing a woman to have an ultrasound if she is considering an abortion, to banning the right to choose even in cases of rape and incest, Scott Walker's agenda in Wisconsin is the exact opposite of what women want or need."

However, it's not just pro-choice advocates that have expressed frustration with Walker — many of the GOP candidate's fellow Republicans have mined through the archives and pulled out several of Walker's own past statements in order to crush his 100 percent pro-life claims. In a radio interview with conservative host Laura Ingraham this past July, Walker was challenged on comments he made during last year's Wisconsin gubernatorial race, in which he said he supported abortion legislation which would "leave the final decision to a woman and her doctor." Walker in part denied his previous statements and instead reiterated his current, toughened positions.

In March this year, Walker also admitted during a visit with Fox News Sunday that the right to have an abortion was protected by the Supreme Court, but maintained that he was still firmly pro-life.

Whether Walker understands the ramifications of his stances on abortion or is simply trying to make a statement to garner votes is unclear. By visiting a clinic that refuses to address the real issues of women's reproductive health, however, he's made it clear that doesn't understand them either way.