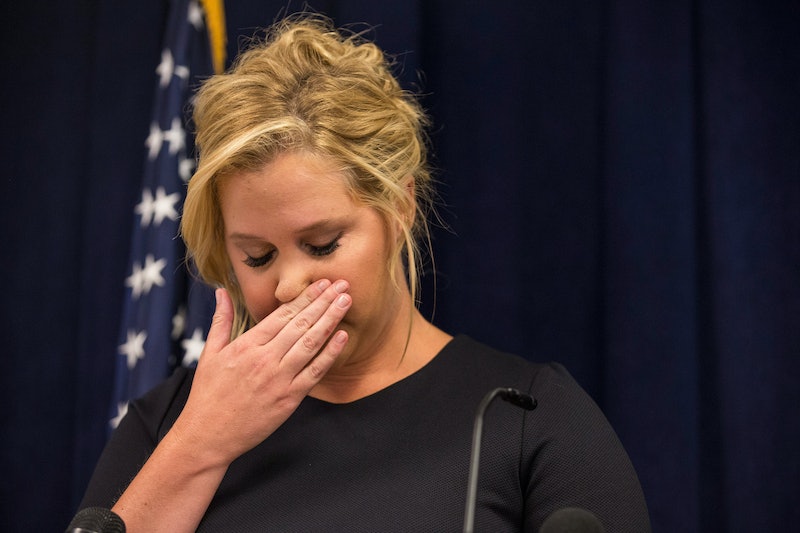 I don't know about you guys, but After Paradise is the place to be on Monday nights. So much happening! After that awkward sit down with Juelia and Joe, host Chris Harrison tricked us into thinking Nick Viall was the 2016 Bachelor, only to bait and switch us and reveal that Ben Higgins is truly the next Bachelor. Honestly? Sweet relief. Because to have seen Ben on Kaitlyn's Bachelorette season is to love Ben, and thankfully, there's someone with a platform who's willing to admit that. On Monday's episode of After Paradise, Amy Schumer called in to talk to Ben and their convo was as smooth as Ben's suit and tie game.

Schumer, who had an amazing cameo on Kaitlyn's season when the gang took a trip to New York, chatted with Ben about, you know, having his life completely turned upside-down in an attempt to find this crazy thing called love. Asked if she has any advice for Ben, the Trainwreck star says, "Donnnnn't do it!" before launching into a concise and much-appreciated few sentences on why Joe is crazy and dead-eyed. But she digresses.

"I'm so excited for you," she tells Ben. "I hope you find love." Then she asks the question we're all asking.

"Do you want to have phone sex right now."

Our boy Ben giggles, of course, then assures her, "You have my number, call later."

He's so fast on his feet, guys! After Chris Soules' season, fans are hungry for an articulate Bachelor who can express how he feels, and drop a boatload of one liners. Kaitlyn's season was easily one of the best in Bachelorette history because of Kaitlyn's honesty, wit, and fiery nature; will Ben's season make the same waves? We'll find out come January.

In the meantime, somebody please book Schumer for an episode of Ben's season. That's a must.