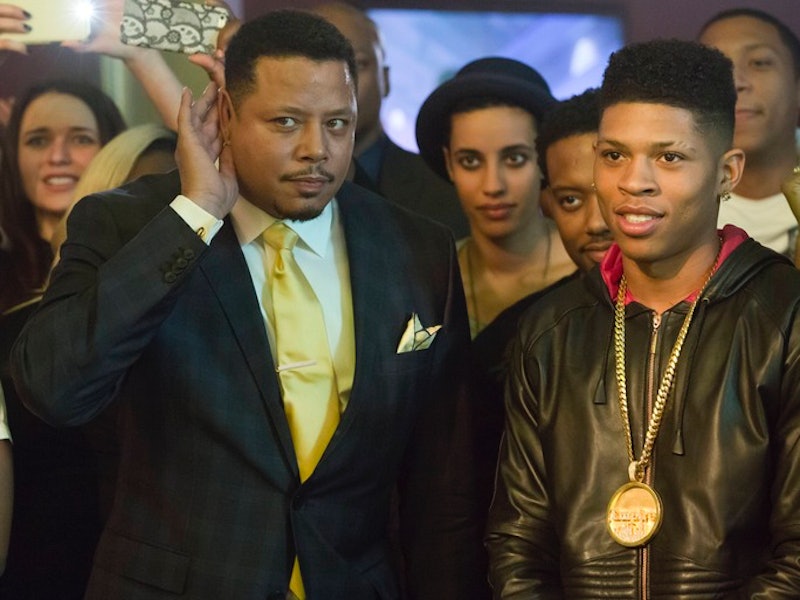 Despite dodging the feds, shadowy gang leaders, and rival company Creedmoor Records, we all know that the real antagonist of Empire Season 1 was protagonist Lucious Lyon. His relationship with, well, pretty much everyone except for Becky was incredibly poor, then good, then got worse, then got slightly better, then got even worse than before. When Lucious ended up in jail for his crimes at the end of Season 1, no one but Jamal was sad to see him go, and certainly no one in the audience. But a first photo of Kelly Rowland in Empire Season 2 has been released, showing her in her role as Leah, Lucious' mother, and it might be evidence that Season 2 is going to humanize Lucious in a way that Season 1 never did.

Empire Season 1 told just as much of its story through flashbacks to the Lyons' past as much as it did through their present actions. These flashbacks added poignancy to their journeys, deepened their characters, and showed just how long ago the issues that continued to plague them in the present day had taken root. However, those flashbacks added depth and humanity to Cookie, to Jamal, to Hakeem, and to Andre. Not a single one of them painted Lucious in anything but a negative light. Even the ones in which he wasn't, you know, throwing his son in the garbage for wearing heels and a scarf were more bitter than sweet. Watching Lucious work so hard at his music, and show so much love to Cookie, just made watching him shut her out of his company and out of his life that much more brutal.

But this single shot shows a much more softer side of Lucious than we've seen in any flashback so far. Instead of watching him work at something with the help of Cookie that we later know he's going to shove her out of as soon as he gets big, we see him as an innocent child, looking upset at whatever he sees on his equally upset mother's face. This hints at a troubled childhood that, though it will never excuse Lucious' actions throughout Season 1, will certainly explain those actions. We get to see more of what made Lucious into the person that he would eventually become, and, if we're lucky, more of how he and Cookie met, and how he showed her his musical talent in the first place.

Honestly, Lucious will never be my favorite character. He has done way too much, and hurt way too many people, for me to change my entire opinion of him over a tragic backstory. Especially when promos for Season 2 have made it clear that jail hasn't humbled Lucious at all. However, it's definitely nice to see him less as a cartoon villain who screams bizarrely poetic rants to a ghostly Bunkie while he's sleeping, and more as a real person who made a lot of mistakes to get to where he is but maybe saw no other option. And, at the very least, it will be nice to see a small, cuter Lucious before the shadowy evil in his eyes sets in. Is Empire back yet?