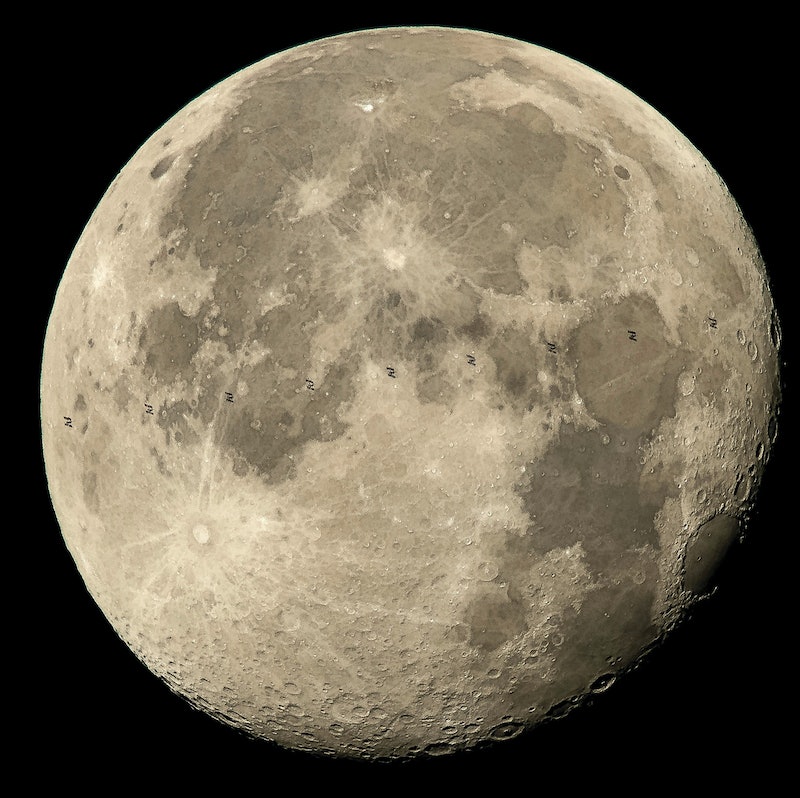 Most people have at some point thought about what they want done to their bodies after they die. Usually, they want to be either buried or cremated, and the odd outlier says they'll donate their body to science. And among those who plan to opt for cremation, people usually imagine their ashes scattered in the ocean, in the woods, or somewhere else on Earth. Nobody mentions the moon as a potential destination for their remains — but that's exactly what Elysium Space has just enabled: You can now be "buried" on the moon.

I say "buried" because nobody will actually be up there to make sure your ashes make it underground — but here's the gist of a lunar burial: You pay Elysium $9,950 (discounted from $11,950 for the first 50 reservations) to put your loved one's remains in a small metallic cube, which they deliver to the moon in a spaceship. Don't take my word for it, though; someone's already doing it. The first person to find their final their resting place on the moon will be the mother of Steve Jenks, who wrote him letters while he was in the Iraq War assuring him, “No matter how lonely you feel and how far you are, always look at the Moon and know I am with you. I love you to the Moon and back.” If there's any reason to spend $10,000 on someone not alive to enjoy the purchase, I suppose that's it.

And in case this leaves you wondering what other wacky options are out there for disposal of the deceased, here are some other unusual and sometimes creepy things you can do with dead bodies.

1. Turn Them Into Shooting Stars

Elysium offers two more "memorial services." The "Shooting Star Memorial" sends the same metallic cubes that can go to the moon into Earth's orbit, where gravity will bring them back to Earth as a shooting stars. So, the next star you wish upon could actually be the ashes of someone's grandpa.

2. Take Them All the Way to Deep Space

Elysium's "Milkyway Memorial" isn't afoot yet but will one day carry ashes all the way out of the solar system, so the deceased can truly exit the Earthly plane.

Cryonics may sound like a concept borrowed from Batman, but actually, hundreds of real-life people (or, err, now-dead people) took it upon themselves to freeze their bodies in liquid nitrogen in case technology enables their revival in the future. Most notably, former pro baseball player Ted Williams's body is now suspended in a cryonics center in Arizona at his kids' will.

4. Use Them as Food for Trees

Whenever a body or its ashes are left near vegetation, they become food for nearby plants. Hence all those sayings about the cyclical nature of life, the interconnectedness of humans and nature, etc. But now, the Bios Urn, a biodegradable funerary urn that contains a seed to cover with someone's remains, is optimizing the recyclability of human (and animal) matter.

5. Make Them Into Beads

In South Korea, where residents can only bury their loved ones for 60 years before the graves must be unearthed, families of the deceased have started instead turning their ashes into decorative beads. These beads are not usually worn; instead, they're displayed in their homes.

Some of these customs may seem creepy, but they're a lot more space-efficient than coffins — with the exception of cryonics, that is, but the chance to bring back someone from the past in a thousand years could be well worth the effort to historians. Personally, I'd totally freeze my body for the chance to be reborn in the future. I just have to assess whether it's worth the $28,000 or if I'd rather save a few bucks and just go to the moon.

More like this
Meet The Disney Imagineer Bringing 'Guardians Of The Galaxy' To Epcot
By Charlie Mock
30 Expensive Mistakes You Don't Realize You're Making With Your Car
By Claire Epting
Here's Your Daily Horoscope For May 18, 2022
By Mecca Woods
Are Gemini & Scorpio Compatible In A Relationship?
By Kristine Fellizar
Get Even More From Bustle — Sign Up For The Newsletter