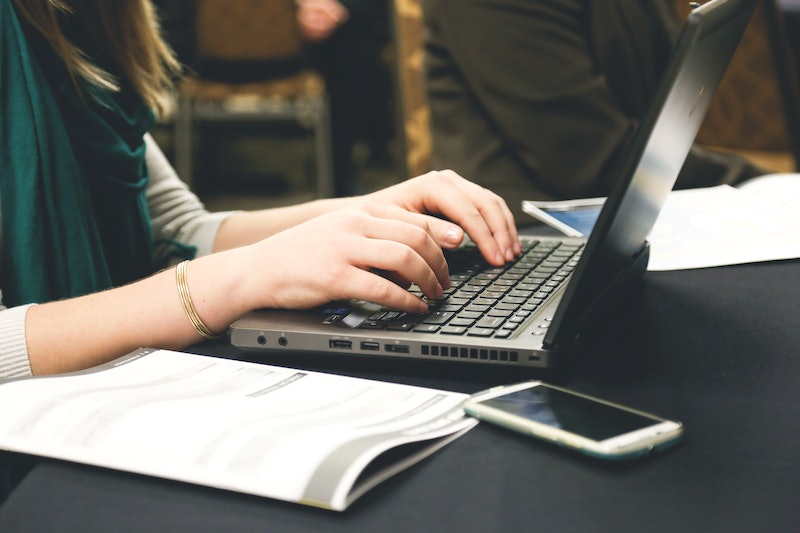 As a millennial raised on the same healthy diet of crippling, misplaced self-doubt with a side of mashed mortal fear that every other human in my generation has, I basically live in a constant state of low key terror as it is. (GO TEAM.) But as a new and unpublished fiction writer, that state of terror is occasionally a continent of terror — and if that unforgivably lame joke wasn't enough to convince you of the mental mess that I am right now, well, maybe you're already too far gone yourself.

Seriously, though, I feel like there is some magnetic force that compels people who are weirdly hypercritical of themselves to want to be ~writers~. Maybe so we can inflict the weirdness in our heads onto fictional characters, or maybe because writing is the only way to shut our weirdness up. Whatever it is, though, it makes for a delightfully paranoid existence the moment you step away from your computer screen and venture back into the real person world. If you're a budding fiction writer — hell, maybe even if you're a seasoned pro — then you have undoubtedly experienced the total nightmare of hearing anybody say these things to you about your writing:

"Oh my gosh, that sounds just like this other book I was reading! It's called [insert Book That You Now Resent Forever And Ever here]."

Let's be real: there are no original ideas anymore. Anything you write is arguably a Frankenstein's monster-esque mashup of ideas that have already been played out. But that doesn't stop you from being on high alert — not because you would ever copy someone's work, but because you're terrified someone will think you did. And even more terrified that someone is going to also have your same brilliant idea and get their novel published first. It's like a race with no finishing line and a million invisible opponents. NO PRESSURE!!

"But couldn't your character just [insert very obvious plot hole that you missed 700 pages ago] and prevent the whole thing from happening?"

Nobody wants to accidentally become the next The Maze Runner.

People should honestly take it as a compliment when you don't want them to read your nonsense/art/whatever you've decided to call it today. The more we love someone, the more unbearable the idea of them reading our stuff is. I'm letting my sister read one of my drafts right now only because she is a secret genius, which somehow counteracts the fact that it LEAVES ME DEAD INSIDE. A million strangers reading your manuscript? Sure. Mom and Dad? Over your dead body.

Uh, finish the book? And then ... stuff? Look, as a new writer you're lucky enough if you even have a plan for the actual plot of whatever you're writing, let alone a plan for what you're doing beyond it. That is Future You's problem. And people asking this only makes you preemptively sorry for Future You and all of her future agony.

"Wow, that book sure is taking you a long time."

This is like the writer's equivalent of someone standing outside the stall and listening to them pee. Let us LIVE. Of course it's going to take a long time — most of us have day jobs and obligations to our friends and families, and that aside, almost every new writer out there has no idea what they're doing. We're still discovering our process. I've personally started and restarted the project I'm working on seven times over the past year and a half and I am not here for anyone's shade.

"Pfft, well, the writing is the easy part."

You know what's even easier than that? Sharpie'ing the words "Captain Obvious" to your forehead. We may be noobs, but that doesn't mean we weren't warned upside down and backwards about how tough it is to get something published. Most of us are fully aware that our work might not ever see the light of day, and that if it does, it might be many shades different than what we started with — but that's not why we're doing this. New writers especially are the ones that are doing it because they love it, not because they need it to be worth something. So yeah, there are hard times ahead — but we are oddly more prepared for them than people imagine we are.