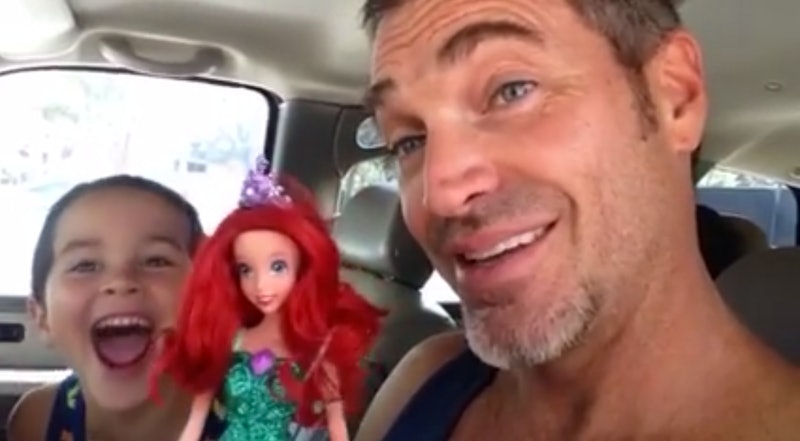 This awesome dad’s reaction to his son buying a doll is refreshingly simple: A resounding “YEAH!” In a recent video posted to Facebook, Mikki Willis, of Ojai, California, explains that when he took his son, Azai, to the toy store to exchange a birthday present, the 4-year-old picked out a long-haired, tiara-wearing mermaid doll. Instead of directing his son toward a toy more stereotypically coded for boys, Willis let Azai do his own thing and take the doll home. Willis’s video about the incident has been viewed more than 14 million times and received almost 5 and a half thousand “Likes.” It may seem strange that a dad simply letting his kid buy the toy he wants should become a viral sensation. After all, it’s just a doll, right? But in a world where kids face intense toy marketing based on gender stereotypes, a dad encouraging his kids to balk convention and do their own thing sets an important, positive example for other parents.

In the video, Willis holds up his son’s new doll and asks, “Now, how do you think a dad feels when his son wants to get this?” Willis and Azai both enthusiastically yell, “YEAH!” Willis explains to Azai and his younger son, Zuri,

His decision to support his son's choice seems to be the right one — For proof, just look at the happiness on this adorable child’s face:

In a follow up to the video posted on Facebook, Willis responds to people’s questions about how he felt when Azai chose the mermaid doll. He wrote,

The honest answer is, it didn't surprise me at all. Azai is equally fascinated by princesses and robots. One moment he's all boy, the next he's expressing a softer, more angelic side. For me this behavior rings more authentic than playing one note all the time.

Although he supported Azai buying a doll, Willis admits that he had some reservations about the one that his son chose, writing,

I don't want my boys to adapt to the programming that a women should be built like a Barbie. I said, "Let's look at all the dolls in the store first, then you can decide." He was clear, "I want this mermaid." I backed off knowing this would be the catalyst for us to have a powerful conversation about the beauty of body-types and racial equality.

Willis's actions make the important point that, instead of trying to force kids to conform to gendered expectations, we should be encouraging them to explore and learn. He sums things up beautifully: "My job as daddy is to provide a safe playing field for my boys to play whatever game they choose, or better yet, create their own game!"