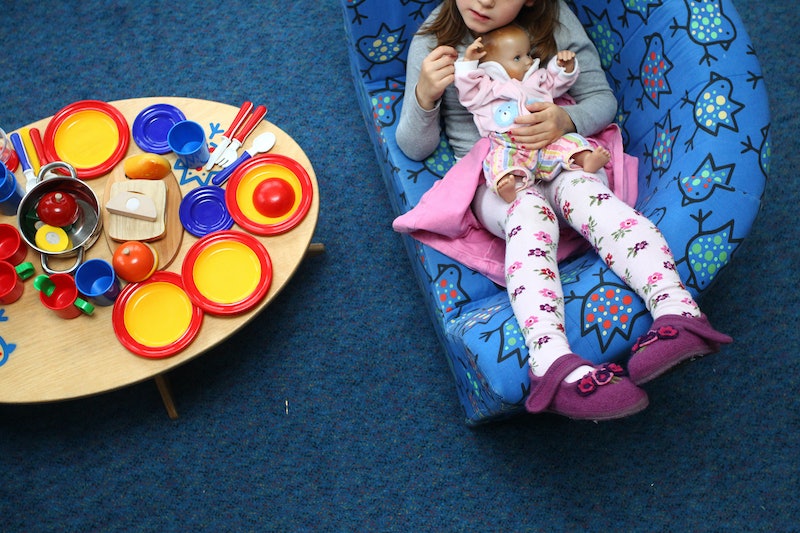 At this time of year, Santa and all the parents, aunts, uncles, cousins, and friends of the world have many little gifts to pick out for the children in their lives — and apparently, it's safe to assume that many of these gift decisions begin with the basic question: am I shopping for a "girl toy" or "boy toy?" Evidence taken from Google word use frequency trends, via Sociological Images, suggests that people are discussing toys in gendered ways more so today than they did in the past — and that seems discouraging.

Philip Cohen, a sociologist, thought to search books indexed by Google for mentions of "toys for boys" and "toys for girls," compared to how many times there were mentions of "toys for children." Basically what this chart makes clear is that the percentage of total mentions that are gendered (instead of generic) has pretty steadily risen from the 1950s, and exists at an all-time high now. Unfortunately, this Google Ngram data doesn't give us full context surrounding these percentages. For all we know, many of the mentions may come from gender studies and sociology books criticizing the practice of gendered toys. But at least we know the trend exists. You can take a look for yourself. Here's the chart:

And now that we know the trend exists, it's time we finally start to do something about it. All it takes is one quick glance at the shelves of any given toy aisle to see that contemporary toymakers aren't quite getting it. Take the new Lego: Friends collection for girls, for instance. You'd think that Legos — brightly-colored building blocks appropriate for most ages and all genders — would be one of the few safe bastions of unisex entertainment, but Lego rolled that status back with pinker, "girlier," dollhouse-style sets they thought would be more appealing to their young, female demo. Interestingly, this gendered approach isn't even a part of Lego's roots: over 20 years ago, Lego was doing unisex toys (and unisex advertisements) right.

So, assuming that more gendered toys are a bad thing, why are we seeing a rise in their gendered-ness now? Even if girls and boys do have innately different toy preferences, evidence suggests that these preferences aren't strong, and that they are highly socially-conditioned. At first glance, the blame seems to fall on marketing and consumerism — gendered toys were what used to sell. But there's another force at play here, too: in the industrialized, post-war world, children simply own many more toys now than they did in the past, and manufacturers stand to make more money if parents shell out for different, separate sets of toys for their young girls and boys.

But the benefits of buying children toys that don't give into gender stereotypes are strong. The National Association for the Education of Young Children suggests: "If you want to develop children's physical, cognitive, academic, musical, and artistic skills, toys that are not strongly gender-typed are more likely to do this." And really, at the end of the day, we should be buying kids things we think they'll enjoy because of their personality, not because of their gender. Is that really so hard to understand?

More like this
Women Around The World Are Cutting Their Hair In Solidarity With Mahsa Amini
By Darshita Goyal
12 Easy Halloween Costumes You Can Wear With A Denim Jacket
By Kirsten Nunez and Bustle Editors
The 5 Best Sheets For Your Purple Mattress, According To Reviewers & The Brand
By Vanessa Spilios
The 19 Best Tweets & Memes About Bisexual Awareness Week
By Lexi Inks
Get Even More From Bustle — Sign Up For The Newsletter