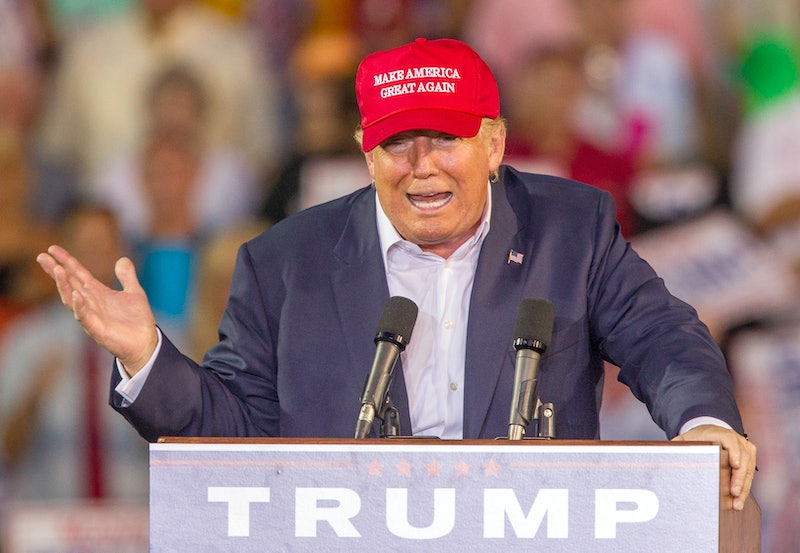 So, imagine you're real estate magnate and Republican presidential frontrunner Donald J. Trump — a big chore, I know, but do your best. So, you've got a lot of money, and a wildly unexpectedly successful political campaign, but you also happen to be one of the most impolitic high-profile tweeters of all time. Should you ease off on the insults, taunts and attacks on social media? Or should you dive headfirst into yet another foible? Trump went with the latter on Tuesday: Donald Trump thinks Mexican is a language, apparently.

Trump, who's already on the bad side of countless Latino voters — lest you forget, he barely got minutes into his presidential announcement speak before generalizing immigrants from Mexico as drug addicts, criminals and rapists, with the throwaway disclaimer that "some, I assume, are good people."

That limp addendum clearly wasn't enough to quell the anger, to say nothing of the far-right immigration proposals that Trump has put out there — he's basically running further right on immigration than any other Republican, even calling for an end to birthright citizenship. All these factors have coalesced to earn Trump a staggering -51 favorability rating among Latinos. In other words, he clearly could use a change of plans — or, rather, a change of heart — on how he deals with some of our neighbors to the south. And making it clear that you think "Mexican" refers to a language, needless to say, is not the way to do it.

This is by no means the only tweet-related foible Trump has indulged in over the last 24 hours, with his ostensibly ended but clearly very much alive feud with Megyn Kelly still going strong. But it's hard to overstate what a disastrously bad look this is for him — he's already got a well-deserved reputation for tweeting and retweeting some pretty hateful stuff, and given recent events, you'd really think derogatory/incorrect sentiments about Latino culture would be out of bounds. It's stuff like this, frankly, that makes you doubt whether there's anyone in Trump's campaign who has the authority, job security, or self-confidence to tell him "no."

Needless to say, the language Trump was going for was Spanish, not Mexican. And given his already generous fixation on all thing Mexico — he's brazenly insisted that the Mexican government is deliberately offloading problematic citizens across the border for America to deal with, and offered up no supporting evidence when directly challenged by Chris Wallace during the Fox News-hosted debate earlier this month — it's a truly logic-defying gaffe.

Make no mistake, if Trump's campaign were serious and forward-thinking, somebody would've told "The Donald" to put down the phone by now. The fact that nothing ever seems to change, in fact, is about as good a sign as any that the whole thing's on a brash, unsustainable autopilot.