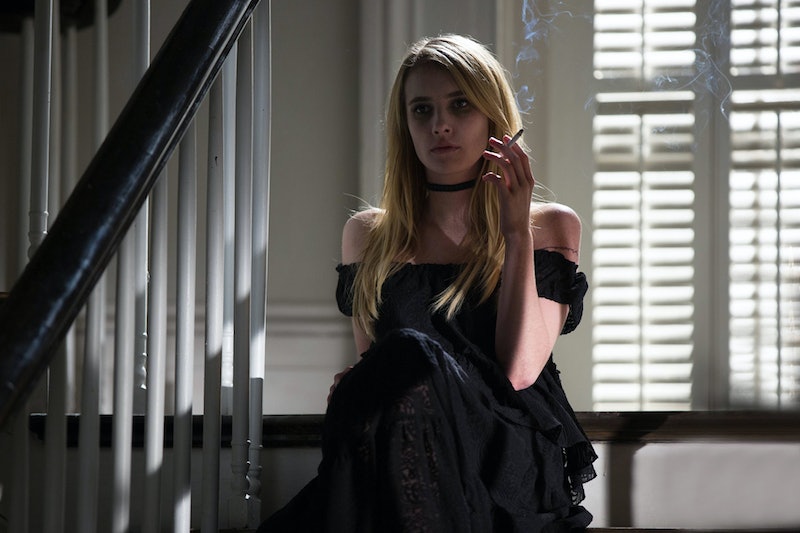 Sorry Breaking Bad fans, but Jesse Pinkman no longer has a monopoly on awesome uses of the word bitch. As much as we loved "yeah bitch!" and "science, bitch," someone else is now boss of bitch, and her name is Madison Montgomery. Emma Roberts plays American Horror Story: Coven 's most spoiled witch, and during last week's episode, Madison revealed to Fiona that she's alive in the best way possible.

The backstory is a little confusing, but basically, Fiona (the amazing Jessica Lange) is the Grand Supreme of the coven, and feared that Madison was the next Grand Supreme, who would kill her and take her powers. To avoid that, she killed Madison, but unbeknownst to Fiona, she was brought back to life by some of the other witches. Then, during "The Sacred Taking," Madison reveals her return to Fiona as part of a scheme to basically mess with her head.

But none of that really matters. It's the way Madison tells her that is flawless, and the scene has become a meme in the past week. Even if you've never seen the show, as long as you have a Tumblr, you've undoubtedly seen the gif about 200 times. Just in case, here it is one more time.

The Internet's best gif-makers took this and ran with it, creating tons of parodies, homages, versions, whatever you want to call them, of this scene.

Here are just some of the best uses of "Surprise, bitch" that the Internet has to offer.

Even the girl on fire can be surprised.

Because that finale was the ultimate surprise, bitch.

They call him the boy who lived for a reason.

The power of technology or the Illuminati?

This is how Coach should've made his grand re-entrance to the loft.

Disney was really ahead of its time with this one.

Only Loki could get away with calling the god of thunder bitch.

May we never see the last of Chloe, who isn't impressed by any surprises—even Disneyland.

It just wouldn't be Tumblr without Doctor Who.

The two greatest memes of our time (by that I mean this month) merge.