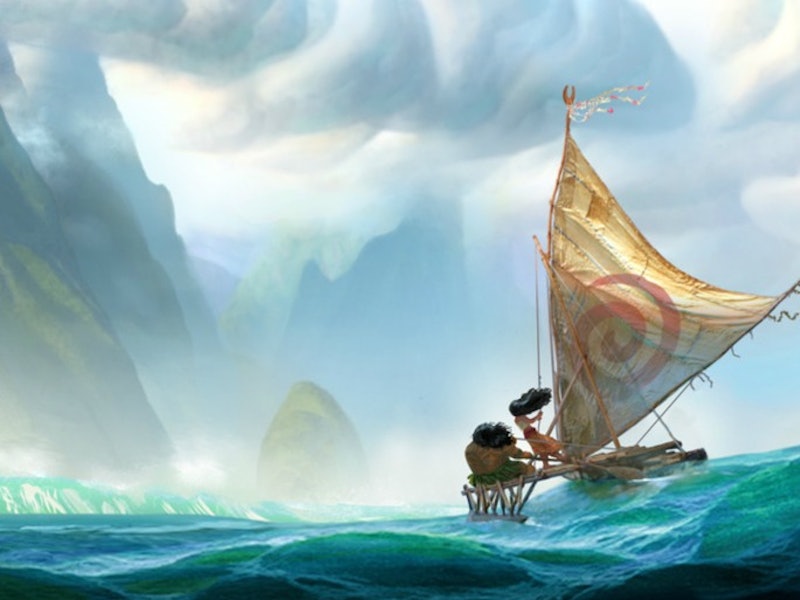 After keeping things under wraps for almost a year, it's finally time to give Disney's new female protagonist a royal welcome. Previews of Disney's first Polynesian princess were recently revealed at the annual D23 Expo, so we at least have a concept of what our heroine will be like. And while it's reassuring to see Moana isn't as stick thin as original art looked, there's still a lot of things besides her appearances that we're eager to learn. So while we're very slowly gathering info on Moana the movie, we want to know who is Moana the character?

"Oh, she's Disney's first Polynesian prin-" Yeah, we got that. But who is she? What are her hobbies, what is her temperament, will she be set up with the new cute-but-flawed non-Disney prince in the vein of Flynn Rider and Kristoff? The last part we have at least a dash of an idea, because we know The Rock will be voicing her demigod traveling companion Maui, and you know how traveling companions get these days.

But, other than that, here is all the combined knowledge, and all the theories, I was able to piece together on the one and only Moana. Fingers crossed we won't have to wait much longer to see her true self.

Moana Is... A "Born Navigator"

She's been repeatedly described as such, and that's good, because you don't want to go search for a fabled island without a good sense of direction.

Moana Is... An Adventurer

Though it isn't really said why Moana is looking for the island, it's important that she (allegedly) took some initiative. Princess Anna only left the castle to seek out her sister. Rapunzel only got down from her tower because she had somewhat of an escort. But Moana, for all we know, might actually want to seek adventure for the sake of seeking adventure.

Moana Is... A Dreamer

Co-director John Musker dubs her as such, so what we have to find out are, well, what are her dreams? Somehow, I feel like they're less about waiting for a prince to come.

Moana Is... In Tune With Nature

Expect major Pocahontas vibes here. Moana is also noted by Musker as having a "unique connection to the ocean itself," and, in fact, her name means "Ocean" in Maori, a Hawaiian language. Can she control it? Is she some sort of sea goddess? Let's not discount the possibility.

Moana Is... A Friend To Animals

She gets two animal sidekicks here, a little piggy named Pau and a rooster named Hei Hei. What would a Disney princess be without those, you know?

Moana Is... The Founder Of Hawaii?

This is a far out theory here, but bear with me for a sec. Moana takes place 2000 years ago in ancient Oceania. Hawaii is part of Oceania, and they're looking for an island. "Maui" is the name of one of Hawaii's grandest islands. There's a inkling that Hawaii was founded when South Americans traveled 4000 miles across open oceans to get there. Is any of this making sense, or should I not look into it because this is also a movie about sea monsters?

Whatever, I'm not a historian. But no matter the circumstances, I'm psyched for Moana to be a character worth traveling with!

More like this
Florence Pugh & Zoe Kazan Have Teamed Up For A Major New Netflix Series
By Rachel Mantock
Kimberly J. Brown & Daniel Kountz Looked Back On Their ‘Halloweentown’ Romance
By Stephanie Topacio Long
All The Sneaky Lindsay Lohan Movie Easter Eggs In Her New Ad, Explained
By Stephanie Topacio Long
The 'Hocus Pocus' Sequel Finally Has A Release Date & It Makes Total Sense
By Shannon Barbour and Radhika Menon
Get Even More From Bustle — Sign Up For The Newsletter