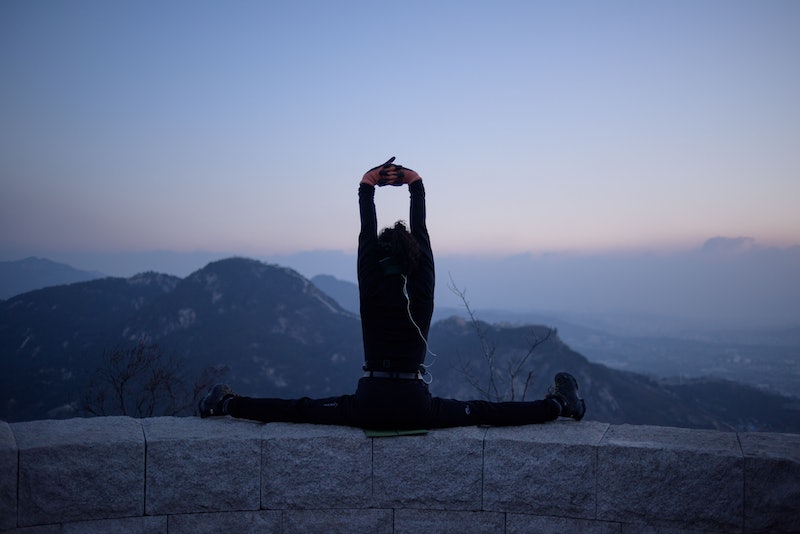 If you've tried to get in shape in the past, chances are you're intimately familiar with how difficult — nay, how impossible it is to force yourself to go running at 6 a.m. Many people turn to fitness blogs and Instagram accounts for motivation, but according to recent research, fitspiration posts can negatively affect women's self-esteem. This doesn't mean that finding motivation on social media is inherently bad; it is, however, another reminder that social media's effect on us largely has to do with how we use it.

On the surface, fitspiration sounds pretty great. The shortened version of the hashtag, #fitspo, has racked up more than 25 million uses on Instagram, where it is typically attached to images of fitness bloggers mid-workout, motivational quotes, and healthy meals. (Also protein shakes. So many protein shakes.) Although fitspiration is about fitness and health rather than weight loss, unlike #thinspiration, psychologists are still wary of fitspiration's larger effect on mental health.

And according to the results of a recent study from Flinders University, they may be right to be concerned. After surveying their mood and level of body dissatisfaction, researchers assigned 130 female participants to two groups. One looked a set of travel images, while the other viewed fitspiration images from Instagram; both types of images were overlaid with vaguely inspirational text. After viewing the photos, participants took another survey to measure their mood and level of body dissatisfaction.

In fact, according to the Huffington Post, researchers even hypothesized that fitspiration posts may be especially dangerous because the subjects are typically regular women, rather than models.

The problem boils down to our tendency to compare ourselves to others. We've all heard that social media might make you depressed, but further research has indicated that this effect depends on how you use it. According to a study earlier this year, users who are prone to social comparison are more likely to become depressed after using Facebook. However, a different study found that users who tend to go on Facebook merely to stay in touch with friends don't experience this effect.

Further research has yet to be done, but it's easy to see how the same phenomenon could apply to fitspiration. Researchers also asked participants if they felt more inspired to work out and improve their diets after viewing fitspiration posts, and many women reported that the photos had the intended effect.

As with most things, the key appears to be moderation. If #fitspo posts motivate you to work out, then by all means, stay motivated however you can. Goodness knows it's hard enough to make myself go running at the end of the day.

On the other hand, it's important not to get too wrapped up in other people's fitness regimens. So what if your gym selfie doesn't get as many "likes" as your college friend's? So what if you try your favorite fitness blogger's avocado-kale-cayenne pepper smoothie and hate it? The important thing is that you're staying healthy and feeling good. Besides, if it helps, this is what I usually look like when I try to work out:

No matter what happens, at least you haven't faceplanted on a treadmill during a gym's peak hour — and even if you have? Well, that's fine, too.