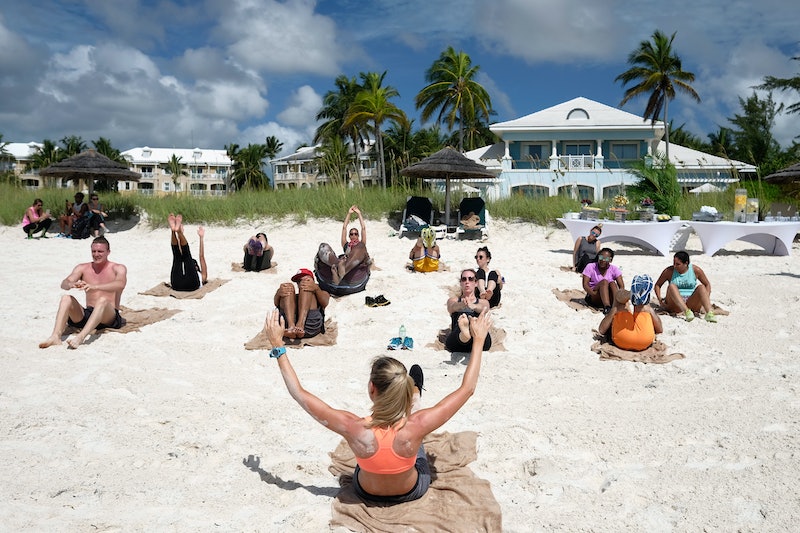 As evidenced by its popularity on Pinterest, thinspiration is a pretty common motivator for people trying to lose weight — whether it's a healthy practice is up for debate, but regardless of its effect on mental health, a recent study found that it's not such a good idea when it comes to physical health either. In fact, thinspiration can actually hurt your eating habits, because life enjoys throwing little ironic curveballs like that.The study was published in last month's Journal of Experimental Psychology and contained two parts, Cosmopolitan reports. In the first, 107 participants either drank a high- or low-calorie milkshake, with half doing so in front of a mirror in order to make them focus on their appearance. Afterward, the volunteers watched a video sans mirror, and the researchers placed a bowl of M&Ms nearby to munch on. Those who drank the high-calorie milkshake in front of a mirror ate more M&Ms than their fellow high-calorie milkshake drinkers without the mirror and the low-calorie drinkers in both groups, even though their low-calorie food theoretically should have left them hungrier.In the second study, the volunteers were asked to either eat lunch or skip it. When they arrived at the research center, some were shown advertisements containing thin, beautiful models, while others were shown identical ads without the models. They were then set loose in a room full of snacks and observed.

As you can imagine, the hungry participants chowed down whether they were shown ads with models or not. However, the participants who ate lunch but were shown pictures containing models actually ended up eating 46 percent more than those who looked at ads without them. Researchers have a pretty good idea of why this is, too; basically, being bombarded with thin imagery makes us focus on our appearance, distracting us from the signals our stomach is sending about being full. Lead author Evelian van Deer says "It seems that a focus on appearance is more detrimental to sensing physiological cues than general distraction [i.e., looking at an ad without a model]." van de Veer. She thinks the effect would be even more noticeable in people who are dieting.

Focusing on your physical appearance to the exclusion of other aspects of your life has been shown to have other kinds of harmful effects on a woman's health too. Several studies have linked it to increased body shame and self-objectification, and similar research shows that magazine exposure also predicts self-objectification in young women. Clearly, surrounding yourself with Western body ideals isn't the best idea for your mental or physical health. But you know what? I'm not here to tell you what to do. Women get enough of that from the rest of the Internet, as well as literally every other aspect of their lives. If you feel like having a magazine cut-out of Kaley Cuoco's hot body helps you motivate yourself to get to the gym, go for it. (Also, may I suggest Emma Watson, Scarlett Johannsson, or Beyonce as a more feminist alternative?) Just remember, it's best to lose weight for your own reasons: your health, and yourself.