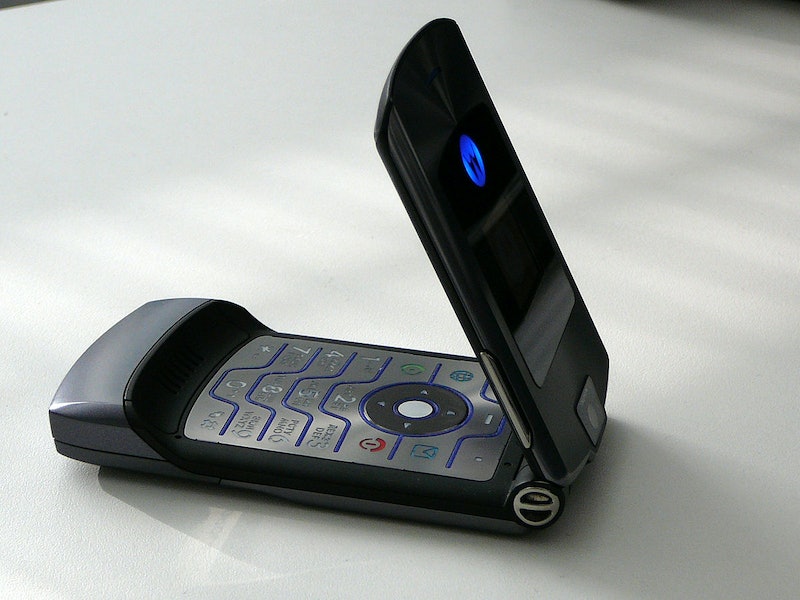 Poll time: How old were you when you got your first cell phone? Kids these days seem to get their own fancy-schmancy smartphones earlier and earlier (I swear I'm seeing 9-year-olds walking around with them, although I can't for the life of my figure out why a 9-year-old would need their own phones), but for a lot of older Millennials, it was probably during the early 2000s. So today for Throwback Thursday, let's remind ourselves of all the cell phones from the early 2000s we were all obsessed with, because it's true what they say: You never forget your first Nokia.

I was in high school when my parents bequeathed me my first cell phone. As a theatre kid, I was usually at school until until around 10 p.m. for rehearsal every night; eventually my folks just got tired of having to dole out their loose change to me so I could ring them from the payphone whenever I was ready to be picked up. I didn't actually use it to speak to anyone other than my parents until I left for college — which, incidentally, was also when I finally learned my own number. It's amazing what giving your phone number out to so many potential new friends during orientation will do for your memory, even if you have a terrible head for numbers.

Although I've had many phones throughout the years, I have a particular fondness for the ones dating back to the early part of the century. They may be obsolete now — but they represent a pretty awesome time in my life, so for me, they're full of meaning and memories. What was your first cell phone like?

That first cell phone I was just telling you about? It was this little guy. First released in 1998, the Nokia 5110 (or 5190, if you lived in North America like I did) wasn't the sexiest of devices — all it really did was make calls, send incredibly short texts, and run games like Snake — but it got the job done.

I never actually had one of these; I used my 5190 until it died on me, at which point the Motorola Razr had already come out, and, well… the choice then was clear. I did, however, know plenty of people who had a 3390, as it was known in North America — and it makes perfect sense when you consider that it was one of the most popular phones worldwide at the time: Released in 2000, it sold 126 million units. It improved vastly on the capabilities of its predecessors, with one of the most notable upgrades being its 459-character text limit — three times longer than the standard SMS at the time.

The Motorola Razr was, hands down, the coolest-looking phone I have ever owned. Not only was it a flip phone — quite the desirable feature back in the day — but it was also slick and futuristic. First released in 2004, the Razr line had a long and happy life, with its colorful screen, excellent ring tone selection, and camera giving us all sorts of toys to play with that our previous black-and-white clunkers had lacked. All good things come to an end, though, and by the time the smartphone revolution had begun, the Razr had fallen out of favor. It did resurface a few years later, though; in 2011, the first Android-capable Razr — the Droid Razr — was released.

The Kyocera Slider was also the first slider phone I recall ever seeing, thanks both to that commercial and to one of my best friends my freshman year of college who actually had one. It's remarkably difficult to find any information on now — it's almost as if the phone never existed — but if dig deep enough, you can find a few teeny, tiny tidbits about it.

For example, I managed to dig up a press release from March of 2003 detailing the new models Kyocera debuted at that year's CTIA trade show in New Orleans. Included in it is... drum roll, please... the Kyocera Slider series. Described as “equally styled for the office or the nightclub” (seriously), it featured a “large, 65,000-color display” that slide up and down, revealing and concealing the phone's keypad as it did so. The press release claims it was “unlike any CDMA handset on the market today.”

So clearly, the phone did exist, even if the internet seems to have scrubbed it from its memory. Now I just need someone to tell me that I'm not the only one who remembers it. Someone? Anyone? Bueller? Bueller?

Remember when BlackBerries and iPhones were neck and neck in the Great Smartphone Race? My, how the times have changed. The very first BlackBerry device, an “interactive pager,” hit the market in 1996, but it wasn't until a few years later that the brand really hit its stride.

The Pearl, first released in 2006, featured a full QWERTY keyboard, a trackball to help navigate (because touchscreens weren't a thing yet), push email (arguably the only reason you'd get a smartphone during this era — so you could check your email no matter where you were), and a camera. In fact, the Pearl was the first BlackBerry model to have a camera at all. Given that most phones wouldn't even dream of hitting shelves without a camera these days… well, we've sure come a long way since then, haven't we?

Although most of us probably associate the word “Walkman” with the portable cassette players we used in the days before not only MP3 players, but even (gasp!) CDs, there have actually been a few attempts over the years to revive the brand and spin it into something more modern. In 2005, for example, Sony Ericsson released a line of phones capable of music playback branded with the Walkman name.

Not going to lie: They looked kind of like bricks (and for the curious, this one here is a W800 model). The fact that such a brick-like phone was released in the mid-2000s is unusual, given that the trend has always been for each successive generation of devices to be thinner and more lightweight than the ones that came before. I still they're kind of cute in a weird sort of way…. but maybe that's just me.

The last Walkman phone was released in 2011. Sorry, Walkman. Some things just aren't meant to be.

I've never once owned an LG phone, although when flip phones were all the rage, I saw these suckers everywhere. CNET described the LG VX6100 in 2004 as “an affordable camera phone with a few added features,” which I feel kind of makes it the flip phone version of the little blue Nokia so many of us started out with. It got the job done, and back when most of us still mostly used our phones as… well, actually phones, that was enough.

More like this
Flip Phones Are Gen Z's Favorite New Nightlife Accessory
By Maria Santa Poggi
11 Super Bowl Instagram Captions To Use On Game Day — Even If You Don’t Like Sports
By Alexis Morillo
Everything You Need To Know About The Samsung Galaxy S23 Ultra’s New Camera
By Alexis Morillo
Samsung's New Phones Have Amazing Cameras & Come In 8 New Colors
By Alexis Morillo
Get Even More From Bustle — Sign Up For The Newsletter
From hair trends to relationship advice, our daily newsletter has everything you need to sound like a person who’s on TikTok, even if you aren’t.