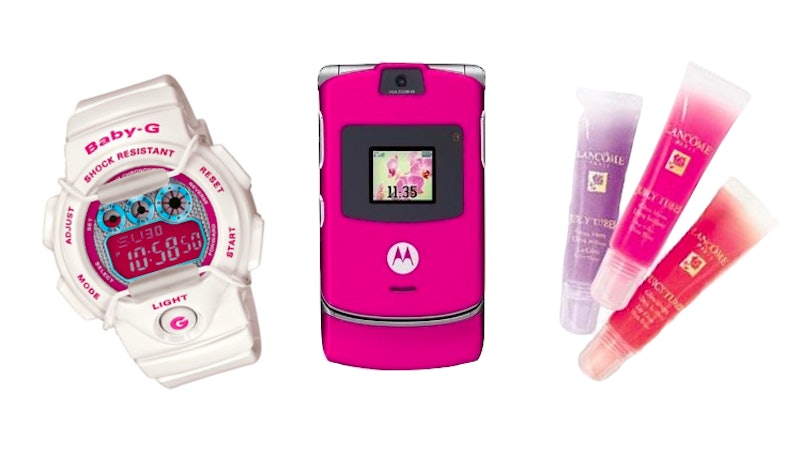 When you were 13, you begged and manipulated your way to the mall, just so that you could hang out in your absolute element. The mall rewarded you with Hot Topic, photo booths, and piping hot Wetzel’s Pretzels. It also introduced you to some of the finer things in the 2000s life, like heavy eyeliner, f.y.e. music, and rebellion.

When you weren’t at the mall, you were text messaging your friends, constantly doing the math to stay under the text message limit so your dad wouldn’t yell at you, and using T9 so that you could engage in like five conversations efficiently. Either that, or you were IMing the love of your life, and boasting like the junior criminal you were after illegally downloading the new Green Day song.

The 2000s were a magical time that encouraged sk8er fashion, attitude, and a solid Internet profile. It became clear that we were entering the digital age of no return, because let’s be honest — you spent more time on your phone, Myspace, and AIM than you did talking to humans in real life. But it was totally chill, because the 2000s also gifted us with these gems, which you were completely obsessed with a decade ago (but have likely all but forgotten about my now.)

The Razr was the coolest phone you could own. It was super thin, had a front camera for optimal selfies before selfies were a thing, and you could customize the wallpaper with Che Guevera or skeleton Hello Kitty.

Glitter was essential if you were going to a birthday party or a school dance. Coating your arms, cheeks, and neck until you were flammable was the look everyone went for.

3. Your AIM screenname (s/n for those in the know)

4. Your AIM away message

Your gateway to indie heaven started here. It often times came with viruses.

Who else bought economy sized Aussie Sprunch spray to intensify curls? Your hair felt like a pine tree, but it sure looked fiiine.

7. Those jeans without pockets on the butt

So fly, so bootylicious.

Can these actually be called This Is Tinted Glue You Smeared On Your Lips? Because try walking around in slightly windy weather and not have a hundred strands of hair pulled out by your glossy lips.

Skater anything was all the rage. Thank you, Avril Lavigne. May you burn for eternity for what you embodied. But goddamn, we loved it so much back then. Bonus points if your skater shoes looked like they were about to fall off. Pretty much, the closer you could get to your shoes falling off without them actually falling off, the cooler you were.

Who didn’t want to smell and taste like a sugar cookie? Jessica Simpson knew what was up.

In 10th grade, Amelie became not only your favorite film, but your essence. After watching it, you dipped your hand in barrels of beans when you were at Whole Foods with your mom. And you were convinced that you would only find true love in France after a series of incredibly quirky events.

Before there was hipster and shortly after emo, there was scene. Scene meant that you had a fashion mullet, that you solely wore highlighter MAC eyeshadow, and that your attire of choice was a black Atreyu hoodie.

What was better than an inquisitive Myspace Survey at the end of a really long day? You would spend hours unwinding after school, answering questions like, “What was the last piece of paper you touched?” or “Do u believe in life after love?”

I'm not even going to include a video because none of us is ready for that many throwback feels right now.

Truly, this was Kelly in her prime. Like, I get that she’s a total fashionista now, but you have to admit that her hot pink hair and ironic school girl outfits epitomized her identity as Ozzy’s perma-pissed daughter.

You listened to this CD on repeat during your twee phase, when you liked to describe yourself as “totally random” and definitely wrote "caring is creepy" all over your binder in Sharpie. You went a full year only wearing long hippy skirts with platform flip-flips.

Pierre Bouvier was your boyfriend, and every year at Warped Tour you planned on confessing your undying love for him.

At first you were skeptical because how could a tiny white rectangle encompass your entire CD collection? You eventually could not go anywhere without it and faced multiple detentions when your geometry teacher caught you with your white headphones in.

23. When you watched and read The Virgin Suicides

You learned to describe it as “transcendently haunting,” but you secretly still didn’t really get it.

24. Your crush on Donnie in Donnie Darko

“How exactly does one suck a fuck?” was the most badass thing you ever heard a guy say. SWOON.

25. Knowing the words to “Lady Marmalade” and feeling naughty

How a song about prostitution became huge with a bunch of tweens, I have no idea. But that’s kind of how the 2000s rolled.