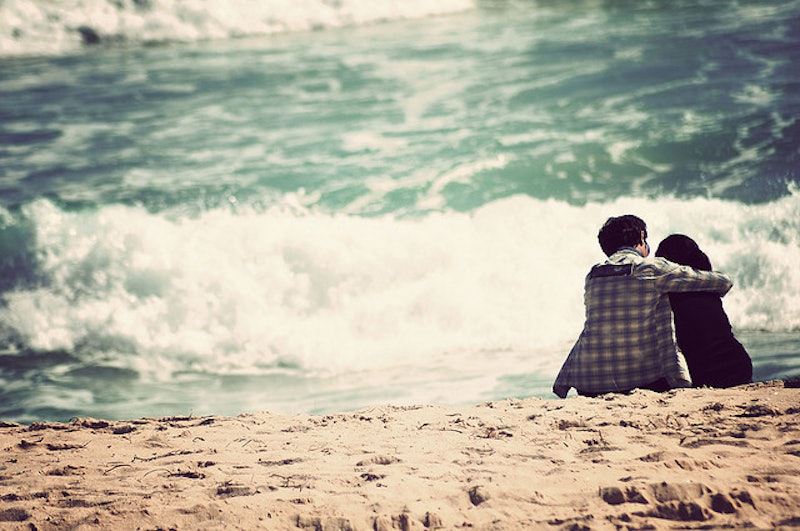 I'm married. Technically speaking, I have no more business using the word "boyfriend." It's part of my past, along with worrying about where my next sex act would be coming from. Nevertheless, the word continues to bug me. It seems to carry a legacy of problems that infantilize adult relationships. So I'm starting a campaign: We should outlaw the use of the word "boyfriend" after the age of 16 — or at least, once people's dating lives evolve beyond shy hand-holding at the movies.

According to the excellent Dialect Blog, the term "boyfriend" evolved, unsurprisingly, from a platonic term for a male friend (as two words: boy friend), with the transition to it signifying a romantic partner coming at the beginning of the 1900s. But the movement to romance wasn't actually complete for decades — word evolution is rarely smooth. According to Allan Metcalfe, author of From Skedaddle to Selfie , "boyfriend" and "girlfriend" retained their just-friends aura until the 1920s and '30s. And for me, that slightly confused origin is part of the problem.

People protest that one of the reasons they cling to "boyfriend" is that there aren't any good replacement words that are widely accepted. "Partner" seems clinical. "Beau" has the aura of twirled mustaches. "Other half" seems frankly anti-feminist. Still, "boyfriend" just isn't good enough for adult women in adult relationships. And this is why:

Here's the reality: Boys, sweet as they are, are mostly idiots. Men are alright. I have a lot of time for men. But any person of any age will know perfectly well that boys — who are insecure, sensitive, immature, and bursting with hormones — are much better left alone until they learn to live without acting like lunatics. We do date them anyway in the beginning as practice, but the contrast with mature members of the male gender does become rather radically obvious as we age — and I know which one I prefer. Why tar grown-ass men with the brush of their teenage selves?

Girls aren't better — frankly, they're often worse. So I don't think "girlfriend" escapes any of these problems. But the period at which you are willing to put up with a boy stops at your 20s. (Or it should, at least. We all know people who date boys long after they should.) "Boyfriend" should be phased out when we stop dating dudes who blow off a date to go skateboarding.

2. Boyfriends Are For Sharing Milkshakes, Not Sex

There's a peculiar innocence to "boyfriend" that's carried over from its origins at a platonic term and emphasized by its youthfulness. And that's fine, and sweet. That is, if you're having an innocent — or at least casual — relationship. Once you start actually buying condoms and living together, though, it starts to feel vaguely ... creepy.

Maybe this is just me, but the connotations of "boyfriend" don't seem to include all of the complications of intimacy, or what it really means to be an authentic, trusting sexual partner.

You'll probably understand what I'm getting at here. "Boyfriend" is meant to encompass a huge swath of relationships, from teenage smooching and awkwardness right up to buying a house together. But for many of us, it still has such a tangible sense of the early period of dating — first kisses, first breakups, upset notes on our Trapper Keepers — that it doesn't really grow with us.

More problematically, people don't take the word seriously. Saying you're buying a house or a business with a "boyfriend" is, anecdotally, less likely to garner you a mortgage or funding than if you say you're doing it with a husband — even if you've been together for ages and can finish each others' sandwiches. "Boyfriends" can be discarded, changed month to month. People still regard it as a slightly flippant title. Which can get really annoying.

4. It Makes The Transition To Marriage Too Shocking

"Fiancé" is meant to be the word for the transition period from boyfriend/girlfriend to husband/wife. But realistically, engagements might actually be a bit of a psychological shock if you've been nestling in the potentially immature, easily-shed title of "boyfriend" and suddenly face a Very Big Upgrade. No wonder people get cold feet.

Perhaps I'm giving too much weight to labels and names. It is, after all, about how you feel within your relationship, rather than how you present yourself. But humans are social animals, and the expectations and reactions of those around us do factor in our decisions.

5. It Represents Our Societal Failure To Recognize Unmarried Relationships

"Boyfriend" is only a surface manifestation of a deeper problem. The concept of relationships before marriage is still a very modern phenomenon, and our flawed lexicon represents a societal struggle to cope with it. With the taboo on premarital sex thoroughly broken in some communities and facing an uphill struggle in others, the idea of a non-marital relationship involving sex, commitment, serious partnership, and children is seriously common. According to the U.S. Census, the number of cohabiting unmarried partners increased by 88 percent in the U.S. between 1960 and 2000. And 75 percent of US women will live with an unmarried partner before they turn 30, according to the Centers for Disease Control And Prevention.

Keeping "boyfriend" and "girlfriend" as the norm for these situations — the most emotionally accepting term — infantilizes the people who've made this massively popular choice. Marriage isn't the guarantor of a grown-up relationship any more (if it ever was). "Partner" would be great as a replacement — it's serious, legal, sounds formal — if it didn't have an unmistakable air of romantic disinfectant. Nobody says they're the boyfriend at a law firm. It just isn't sexy enough.

6. There Is A Good Alternative

What else can we do? "Man-friend" sounds like a German exchange student. "Person I'm F*cking On The Regular" is parent-unfriendly. "Sweetheart" sounds like you need to be wearing a bonnet. "Flame" makes you sound like your eccentric Aunt Sally. And "Bosom Companion" should never be uttered outside of a BBC film.

I'm putting my hand up for "My Man/Person/Human." It's simple, direct, has a sweet romantic history (think about all the tragic songs about "my man" or "my woman" by Billie Holiday and co), has an air of possession that implies monogamy (if that's what you're into), and is likely to get the message across.

Want more of Bustle's Sex and Relationships coverage? Check out our new podcast,I Want It That Way, which delves into the difficult and downright dirty parts of a relationship, and find more on our SoundCloud page.

More like this
14 Underrated Date Ideas To Try With Your Partner
By Lexi Inks
Bumble's "Compliments" Feature Lets You Message Before You Match
By Lexi Inks
Robert Brotherton's Boyfriend Ra'ed Saade Competed On Several Reality Shows
By Brad Witter
Are Capricorn & Aquarius Compatible In A Relationship? Astrologers Weigh In
By Kristine Fellizar
Get Even More From Bustle — Sign Up For The Newsletter