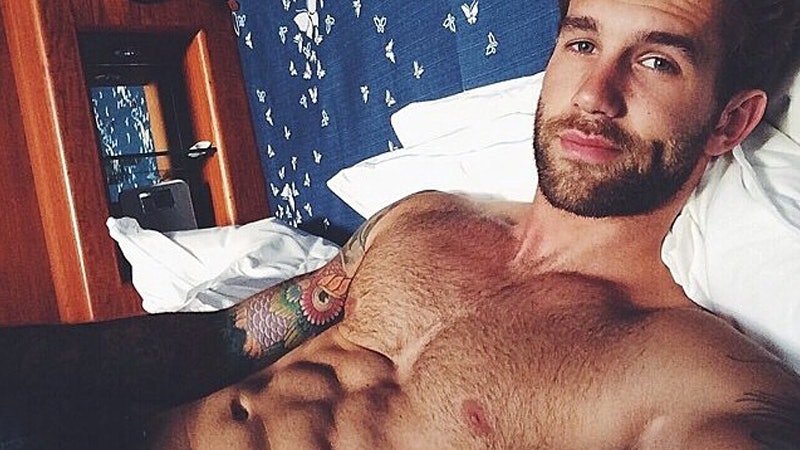 The thing about dating a Grown-Ass Man is that you won't know you've found one until you have one. Before then, they'll exist only as these mystical creatures — hypothetical hybrids of your dad's best qualities and the way McDreamy treats Meredith Grey. (Treated. RIP. Ugh.) No matter how he comes into your life, or how long it takes you to find him, dating a grown-ass man is a game-changing thing for a grown-ass woman. It is an absolutely magical, unprecedentedly wonderful experience to be with one of these emotionally stable and mentally secure individuals. You realize that most of the stress you suffered in your previous relationships stemmed from nothing more than the simple fact that you have to be of a certain maturity to actually have a healthy, happy, functioning relationship.

It's an experience every last one of us deserves to have. But appearances can be deceiving. Are you sure the man is your life is truly a grown-ass one? When you're drunk on hormones and happy brain chemicals, it can be difficult to see through your love haze to evaluate the grown-assness of a man in an objective way. So to help you identify it more clearly, here are 14 signs you're finally dating a Grown. Ass. Man.

The biggest fears you have about relationships — wondering if you'll be emotionally compatible with someone, be able to coexist with them, and maintain your own existence while still devoting enough time to theirs — become obsolete when you date a grown-ass man. You don't worry about infidelity. You don't worry about where you stand, or what he wants, or how things will be six months from now. Simply, he's at a place where he can actually care for another human being, and treat someone with as much respect as he gives himself. He's confident enough in his own life that he can support someone else's dreams and goals. He's matured enough not to let the little things blow him over.

He's Honest And Upfront About His Intentions

With a grown-ass man, you're not constantly wondering "Will this work?" in an existential how-can-I-tell-if-this-is-meant-to-be kind of way, simply because it's already working. You have your answer from the beginning. There's no guesswork involved. That's not to say that every relationship with every grown-ass man is meant to be, or that they all have perfectly happy endings. But if you're on different pages or want different things, then you'll know it, because he'll tell you. You'll know exactly where he stands, and if you don't, you'll be able to ask him, and you can have an adult conversation about it.

There's just not. You don't argue over petty things that don't actually warrant concern. You don't waste your time or energy on becoming irrationally jealous and letting that feeling overcome you to the point of making a Whole Big Thing out of it. You trust each other because you know that you're both trustworthy. There's nothing more to it.

He's Busy With His Career, And Supports You Endlessly In Yours

You don't collapse into each other or cease to exist outside your bedroom for the first three months. Because you have shit to do, and he has shit to do. That's one of the most beautiful and sustainable things about your relationship: You're both committed to more than just one another. And because you both understand that, you can respect it in one another (and ultimately use your love to bolster your drive to achieve even more).

You don't have to do influence him to be an adult, and you certainly don't have to be anxious over whether he's going to be irresponsible in some devastating way. You can talk about money and know that he'll be reasonable and responsible about it. He remembers to call his mom and send her flowers on Mother's Day. He has practical goals and pays his electric bill on time. He can cook himself a meal and clean his apartment. He is, all in all, a functioning adult, and thankfully is not waiting around for someone else to get his life on track for him.

He's The Beautiful Combination Of Emotional And Mental Maturity

He doesn't let a moment of anger consume him. Nor does he lose sight of the greater goals you have for your relationship. He has a basic grasp on the tenants of emotional intelligence. He can view things objectively and not get swept away by one small issue. In essence, he understands what it means to have a good relationship, and he also knows how not to let his emotions control his life in any negative way.

You Can Talk Through Anything (No, But Actually, Really Talk It Through)

You think that, in theory, you've been able to "talk though" anything with your past partners, as it's almost a promise you're required to make to each other when you're first opening up to a new relationship. But it's not until you're with a grown-ass man that you know what this really means. It means that you can put anything on the table, and as long as you are respectful and honest and kind, you'll receive the same treatment in return. It means that nothing is too weird or bad or traumatizing to discuss. You go into every conversation not as "will this break us?" but "how will this make us stronger?"

He Takes You Out. He Wants To Treat You Well

Date night is not something he begrudgingly agrees to because he feels obligated. He actually wants to show you how much he cares, and this is one of many ways he does it. He wants to get dressed up and take you somewhere nice. If it isn't already principle for him to be respectful, grateful and want to show his partners a great time, when he's with you, it's taken to a new level. He cares enough about your partnership to want to wine and dine you, and keep dating you even after you've been in a relationship for so long. It's not about showing off or asserting dominance by spending money on you (Hell, who's to say that he even pays every time?) — it's about spending time together, and making that time special.

He Sincerely Regards You As An Equal, And It Shows

You being his absolute equal isn't just something he says. You see this in the way he speaks to you, brings up hard topics, compromises, respects your opinion, etc. He doesn't talk down to you. He doesn't treat you like a child to whom things need be explained. Even if he has a better grasp on the topic at hand, he regards you as an equal with an opinion as valid as his, and he responds accordingly.

You Don't Have To Look For "Hidden Meaning" In Your Interactions

Your texts are just texts. You don't have to sit around wondering what a comment "means," because if you're unsure, you can just ask. Grown-ass men are not in a place where they need to play games. There are no mixed signals, or "hints" that are supposed to be magically interpreted as statements.

He Knows What He Wants

"Knowing what he wants" may mean that he knows that he's really into you, and that he wants to keep dating to see if anything will come of it, though not necessarily lock it down next week, and that's okay. That might not be what you want either. The point is that, regardless, he knows where he's at, so you never have to wonder. He knows what's best for him in this moment, and what he can offer you both now and in the immediate (and long-term) future.

And he's willing to hear the ways he might be wrong. He wants to change and be better; not because you've told him to, but because he wants to. He wants to live a better life, understand who he is, and do all of this in part so that he can share it fully, and genuinely, with someone he loves (aka, you).

He Regards Your Trust As Something He Must Earn

He does not expect you to be immediately trusting of him, and this isn't because he considers himself untrustworthy. It's only because he recognizes that you're an intelligent, capable individual who knows that not everybody can be (nor should be) trusted right off the bat. So little by little, he opens up to you. He shows you why he's trustworthy. He makes no empty promises without evidence to support them. He makes you feel as though you're safe — not as though you have to convince yourself you are.

He's grateful for each day he gets to spend with you. He understands that a relationship is about experiencing things together, and choosing to be in each other's lives. He never thinks he owns you, nor does he take your company for granted. He does not regard you, or your relationship, or your love, as something he just "has" indefinitely. Often, this is the biggest downfall in relationships: You begin to take it all for granted, and sooner rather than later, it becomes dull and uninteresting, as you assume it's just "yours."

Any grown-ass man knows that this isn't the case. He knows that you are not reliant on him, nor do you need anybody else to validate you. Because of this, your love is something that the two of you share for the experience; not a way to become codependent and start a family because that's what you "should" do. Knowing this, he remains present and grateful to be with you. And when you consider each moment a blessing, not a right, you treat it as such.