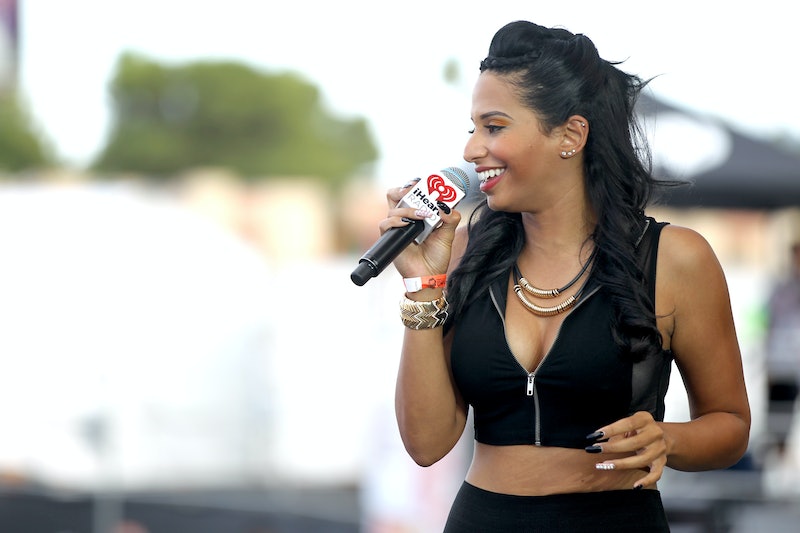 It's almost that time of year, y'all. On Sunday, Aug. 30 the MTV Video Music Awards will provide us with a few hours of crazy entertainment and some iconic pop culture moments — may we never forget Kanye West's Beyoncé rant and Miley Cyrus' foam finger situation with Robin Thicke. As much as the actual show has grown to be an important part of celebrity culture, the VMAs red carpet pre-show has had its own memorable moments. Let's face it, you probably are sitting around waiting to see what Lady Gaga will be wearing next. MTV recently announced their red carpet pre-show hosts, and Girl Code ladies Carly Aquilino, Nessa Diab, and Awkwafina will be doing their thing live. But since I've been seeing her name pop up a lot in other areas, too, it's time to ask: Who exactly is Nessa Diab?

The radio and television personality usually only goes by her first name, Nessa, and she is pretty worthy of the being mononymous. Nessa has been a prominent face on many MTV programs and in hip hop circles for quite a few years. But how did she become such a big name in entertainment? Well, she hustled a lot and has undeniable talent, to start.

Nessa was born in Southern California and eventually moved up to the Bay Area to go to college at the University of California at Berkeley. While she was in college, she became an intern at KYLD WiLD 94.9 in San Francisco. She eventually started her own show at WiLD: a news show about the Bay area called “The Baydestrian Report.”

It didn't take long before Nessa was hosting “West Coast Report" on POWER 106 KPWR in Los Angeles. The most impressive thing about her is that during all of her amazing hosting gigs and shows and projects, Nessa managed to graduate with a B.A. in Mass Communications at 20 years old from UC Berkeley!

So, how did she end up on MTV? After growing hosting many night radio gigs, she was cast as one of the ladies on the network's show Girl Code, a spin-off of the popular Guy Code. After gaining popularity on the show and growing her fan base with her hilarious antics, she was became the go-to girl to mediate after-show specials for Teen Mom, The Real World, and Snooki & Jwoww.

These days, Nessa is not only part of the MTV family, but she's also joined one of the most legendary radio stations, Hot 97 in New York City. Nessa stepped into the iconic Angie Martinez's place in January and expanded her empire even more. In March, she was chosen by the United Nations to discuss women in media and the barriers they face. She said at the time,

I believe on air personalities don't have to be a male to attract young females or be an overtly sexual woman to attract males. I truly get to embrace this philosophy at HOT 97, the biggest and most influential Hip Hop radio station in the world. HOT 97 has always been at the forefront of employing women as leaders, which is why I am here today.

She went on to encourage women to not undervalue their worth in the business and keep working hard. Nessa deserves all the success she's had, and I, for one, totally support her as an empowering voice in media.

More like this
Everything To Know About Taylor Swift’s 10th Studio Album, 'Midnights'
By Grace Wehniainen and Jake Viswanath
'School Of Rock' Changed Joe Keery's Life Forever
By Alyssa Lapid
Did 'Grey’s Anatomy' Just Drop A Major Taylor Swift Easter Egg?
By Grace Wehniainen
DJ Tyler West Is Probably Safe From The “Strictly Curse”
By Maxine Harrison
Get Even More From Bustle — Sign Up For The Newsletter