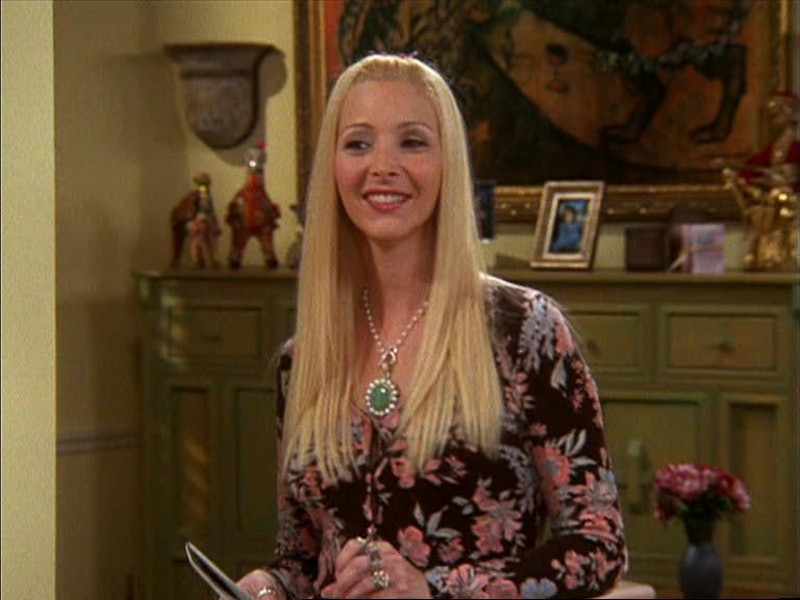 The first time my nieces excitedly told me about creepypastas (no, I'm not hip, how did you know?), I thought they were talking about pasta shaped liked bats and eyeballs. That's just how I roll. However, I was wrong: Creepypastas are actually the Internet's version of urban legends — and one off-shoot of your typical creepypasta are crazy dark fan theories about every beloved show and movie from your childhood. The latest theory comes from intrepid Twitter user @strnks, who suggested a Friends alternate ending theory that basically involved revealing the entire series took place entirely inside the drug-addled brain of Phoebe.

That's right: In this fan theory, Ross, Rachel, Monica, and even Mike, would have been nothing more than Phoebe's fever dreams. Unlikely, sure, but you have to admit — the theory does work out when you think about it. And it would explain a lot of those continuity errors...

This particular fan theory destined to forever be imprinted in your mind when you watch Friends is just the latest in a long line of disturbing alternate universes cooked up by fans to ruin everyone's childhood. Don't forget: Active imaginations have destroyed Rugrats, Toy Story, and Hey Arnold.

Here are just a few:

Friends All Took Place In A Homeless Phoebe's Mind

The horror! Can you imagine an ending that would be more of a downer for Friends? I have to admit, though, it's also weirdly plausible: Phoebe's stories were always off-beat and much darker than the other characters', so if Phoebe was dreaming everything up, odd things like the late series discovery that she had mugged Ross when they were both kids would suddenly make sense. That would also explain all of the different versions of how/when Chandler met Rachel, and the alternate universe episodes. Yep, I'm freaked out too, now.

The Rugrats Were All Dead Except For Angelica

One of the most widely known creepypastas involves an elaborate fan theory where a young Angelica imagines lives for all of the Rugrats babies — who are actually dead. Chuckie died with his mother, Tommy was a stillborn, and the DeVille's had an abortion so Angelica imagines a boy and a girl baby since she doesn't know the gender. This tale gets more twisted when it suggests the reason why Stu is always making toys in the basement is because they're meant for the son he didn't get to raise. The theory has taken on such a life of its own at this point the original creator of the theory is lost in the echelons of Internet history, but you can read several increasingly dark interpretations at the Creepypasta Wiki — if you never want to watch The Rugrats again, that is.

Blogger Jon Negroni's detailed theory that Jessie's original owner Emily is actually Andy's mom is the most plausible theory on this list. Negroni points out Andy is basically wearing Jessie's hat without the ribbon, and while Emily had Jessie's hat, it isn't in the charity box that Jessie is placed in. This would mean that Andy's mom left poor Jessie under her bed for years, while later her son would do the same to Woody and his friends. If nothing else, this proves it's a hard knock life out there for toys.

Homer Simpson Has Been In A Coma For 20 Years

Redditer Hardtopickaname made an interesting discovery when they noticed during Homer's 1993 chat with God, he's told to wait to six months to understand the meaning of life. Around that time, Homer goes into a coma... but, as this theory questions: did he ever really come out? After that period, The Simpsons stories became less realistic and more outlandish — could it be possible that what we all thought was the show being reimagined could actually be a commentary on Homer's strange internal life?

Ferris Bueller Is Just A Figment Of Cameron's Imagination

That's right, Ferris — champion of skipping school and making the most of life — was basically just poor, sweet Cameron's version of Fight Club 's Tyler Durden in this theory. A Meta Filter discussion took a turn when one user suggested, "One day while he's lying sick in bed, Cameron lets 'Ferris' steal his father's car and take the day off, and as Cameron wanders around the city, all of his interactions with Ferris and Sloane, and all the impossible hijinks, are all just played out in his head. This is part of the reason why the 'three' characters can see so much of Chicago in less than one day — Cameron is alone, just imagining it all."

The Pigeon Man Committed Suicide In Front Of Arnold

Hey Arnold was a dark cartoon as it was, but leave it to the Internet to make it even darker. Remember when the Pigeon Man's pigeon coups were vandalized and he lamented not understanding people? A Reddit user proposed the Pigeon man took a flying leap off the building in front of Arnold rather than flying off into the sunset. Given how often Arnold tackled tough topics, I wouldn't be too surprised to discover the writers meant for the Pigeon man's literal flight into the sunset to be an allegory for his death.

Allow me to leave you with this totally not at all disturbing thought: the cab in the theme song to Fresh Prince of Bel-Air was taking Will to Heaven. There is a long Reddit thread detailing different aspects of the theory, including hypothesizing that the mansion is purgatory, which is why Will is the only one left there in the end, and the episode where Will gets shot is his subconscious grappling with his death.

On the upside, at least Will had good company while he was hanging out in the afterlife?

Isn't artistic interpretation grand? At least these are all just theories, so your favorites are still safe. Probably.