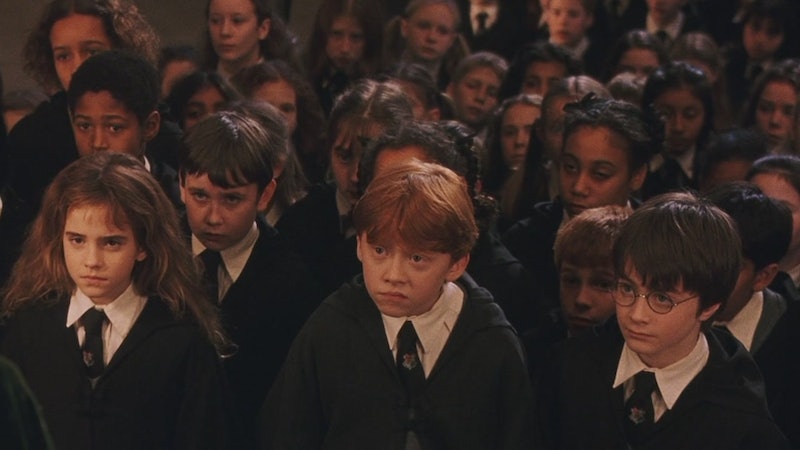 I love fan theories. I think that they expand the world of a book, or add interpretations to old, beloved scenarios that help me see things in a different way. And there are a ton of Harry Potter fan theories for the HP universe. And isn't the universe the best part of the books after all? Because although Hermione rocks off our socks with her amazing smarts, Ron is our beloved everyman, and Harry is remarkably brave given his rough circumstances, the world J.K. Rowling creates is everything.

Come on, who wouldn't fall in love with a whimsical world of magic, full of puns (Diagon Alley, anyone?), and incredible creatures? Harry Potter fans were all devastated when the books ended in 2007, but with the rise of a theme park, and now three completely original movies set in America, fans are still being fed delicious tidbits of a world that we've only seen a little bit of. Of course, that's not enough for us. Harry Potter fans have also created hundreds and thousands of works of fan fiction (some great, some... not so great), but on top of that, they've taken things even further with fan theories.

From Dumbledore really being Death in the story of the Deathly Hallows, to Hermione secretly being the long lost sister of Harry himself. On top of those, I've collected seven of the most mind blowing Harry Potter fan theories out there. Strap yourself in, because your view of the Boy Who Lived may never be the same.

The Dursleys Hated Harry So Much Because He Was A Horcrux

This theory is particularly interesting because not only does it sort of exonerate the Dursleys, it almost makes them heroes. We've seen the effects of Horcruxes on people (mostly Weasleys) before. It didn't take long for Ron to have a complete breakdown after wearing Slytherin's locket for too long, Ginny was completely taken over by Tom Riddles' diary over the course of a school year, so could you imagine being around a source of inexplicable evil for almost 11 years?! You would be cranky, too.

Voldemort Was A Cannibal

This one is actually quite long, so the rest of the Reddit thread is here. This theory is particularly disturbing, but nonetheless quite intriguing. Not many people know exactly how a horcrux is made apart from the fact that you must kill a person to make one, but anything beyond that is a mystery. J.K. Rowling herself has gone on record as to saying that the act committed to create a horcrux is too terrible to discuss. Cannibalism is still the final frontier as far as taboos go. If the act of creating a horcrux is so terrible, why not have it be cannibalism? What's more disturbing than Lord Voldemort going all Hannibal Lecter on some members of the Order of the Phoenix?

Ron Weasley Is a Time-Traveling Dumbledore

This fan theory may have spun out into an elaborate joke thanks to The Toast's Mallory Ortberg, but the origins are deadly serious. Sometimes called the "Knight2King" theory, it posits the idea that Ron is simply Albus Dumbledore lost in time, and will eventually go from the "Knight" of Ron Weasley to the "King" of Dumbledore, a la Alice Through the Looking Glass, I suppose. You can find the entire essay that picks apart the books in excruciating detail for any evidence here. Obviously, once Harry Potter and the Half Blood Prince came out, the theory began to lose a bit of traction, but up until that point it actually seemed to make a bit of sense.

Professor McGonagall Is A Traitor

I just want to go on record as saying that I do not endorse this theory. Professor McGonagall is one awesome chick and even though she is fictional, I would do anything to not make her angry. However, in the spirit of journalism, I must report things as they are. Most of this stems from the fact that on that fateful night on Privet Drive, McGonagall was lurking around the Dursley's home apparently without the Order of the Phoenix knowing that she was there (although several other theories have popped up to answer that), or the fact that she was resistant to the idea of celebrate when Voldemort was vanquished the first time. As flimsy as the evidence is, several essays have popped up in an attempt to prove it.

Say it ain't so, Minerva!

This one is just bonkers enough to need to be true. More evidence here, here, and here, from day one readers knew that Crookshanks was a different sort of cat. We know now that Crookshanks is canonically half kneazle, but the evidence about him being a secret animagus as well is quite compelling. For starters, you can't throw a rock into the Harry Potter universe without hitting an unregistered animagus. We also know that names are incredibly telling in Rowling's world, with Sirius being named after the dog star. Regulus is actually a star in the constellation Leo, thus making him more of a cat person. Is that enough to convince you? Check it out further to be sure.

The golden trio just can't seem to catch a break when it comes to owning non-people animals.

Draco Malfoy Is A Werewolf

I love this theory, but that's mostly because I love anything that paints Slytherins or villains as something more than just evil jerks. This is also a theory that fits eerily well into the series without really needing to adjust facts to keep things canon. The general thought is that during Harry Potter and the Half Blood Prince, Draco is not technically a fully initiated Death Eater with the Dark Mark, but instead he carries the bite that Fenrir Greyback gave him. This is further supported by how sickly and stressed he seems to be throughout the book. Is it just nerves over killing Dumbledore, or is he constantly fearing the next full moon? You decide. Check out here for more information and evidence. This is a particularly awesome theory given the fact that it means that the Malfoys did not escape the conflict entirely unscathed, and what's more heartbreaking to a group of magical racists than having their own beloved son becoming one of the things they look down on?

It's OK, Draco, someone other than Snape probably knows how to mix the Wolfsbane potion.

Neville Longbottom Is actually Another Chosen One

I hate how in the movies they say that Harry Potter is the chosen one when really you don't know whether it was Harry or Neville Longbottom.— Ridog Hammbone (@RionHammond) August 11, 2015

This one flirts so closely with canon that some of you might be shaking your head and going "duh", but there are subtleties to this theory that make it still just a theory. That's a shame since it's actually completely perfect. Neville Longbottom had the greatest character arc in the entire book series, going from awkward and forgetful nerd to incredibly handsome, brave leader of the resistance. Some have even argued that Neville is the most important person in Harry Potter. When Harry first learns of the prophecy that ties him to Voldemort, Dumbledore reveals something very telling:

"The odd thing is, Harry," he said softly, "that it may not have meant you at all. Sibyll's prophecy could have applied to two wizard boys, both born at the end of July that year, both of whom had parents in the Order of the Phoenix, both sets of parents having narrowly escaped Voldemort three times. One, of course, was you. The other was Neville Longbottom." (OotP pg 842/742)

In the books the idea that Neville is the Chosen One is immediately rejected due to Harry's lightening shaped scar marking Harry as "Voldemort's equal" (an odd thing to do to a one-year-old), but what if that was a red herring? This site breaks down the situation with a lot more detail, implying that the burden is not only Harry's. How perfect could that be, for a boy who thought that he was practically a squib for most of his life to actually be one of the people destined to destroy Voldemort? While Harry, Ron, and Hermione were in the woods camping and looking for horcruxes, who was the one who faced Death Eaters full on, protecting the students of Hogwarts until Harry could ride in at the last minute to save the day? Who used the sword of Gryffindor to behead Nagini, thus freeing Harry up to take Voldemort down? Neville Longbottom, that's who.

He became the herbology professor because there's really no way to top this.