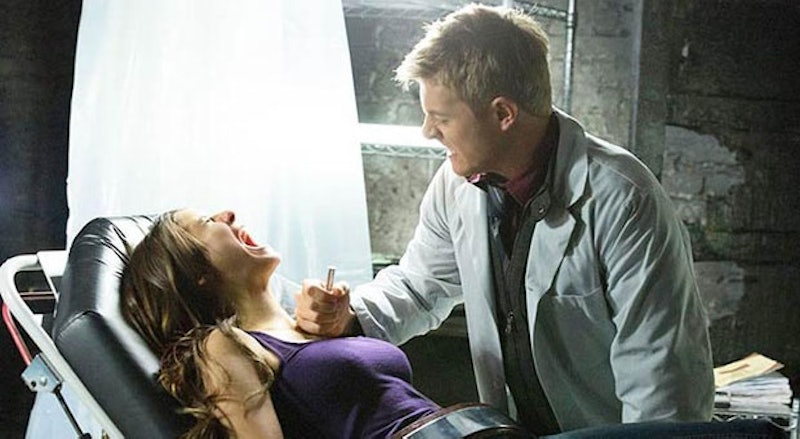 Leave it to The Vampire Diaries to stick a knife in its viewers' guts and twist it hard. It's not a season finale, so we haven't lost a beloved character (yet, anyway, we might lose Katherine to old age very quickly come January), but we've lost something worse in the eyes of many fans. It should go without saying that spoilers are ahead, but just to be safe: SPOILERS AHEAD.

Delena is no more.

Take a moment. Let that soak in.

Delena is over. And here's the real clincher: Damon breaks up with Elena.

Why? It's one of their typical selfless blah, blah, blah moves. Damon realizes he's evil. He's not good enough for Elena. She deserves better. The kicker is that she was ready to forgive him for his relentless revenge against the Whitmore family. She was tortured herself and almost made into an Augustine vampire this week; she understood. Of course, happily ever after doesn't make for good television (especially not in Mystic Falls), so we knew something like this was coming, but it's still a blow for Delena fans everywhere.

But as heart-wrenching as the breakup was (they always are on TVD), we knew it was coming eventually. The real unexpected turn in the fall finale was Katherine's fate. She's been falling apart, aging incredibly quickly and barreling towards death. Her hair is graying and falling out in clumps. Her hearing and vision is going and she's gone so far as to hire Matt as a personal trainer to "maker her hot again."

On top of this, she and Stefan have rekindled their love affair, and it seems like that might even include the "love" part too. She's always wanted to live, of course (Katherine is nothing if not a survivor), but now she has a renewed purpose. When she asks Nadia (her daughter) if she thinks she can be forgiven after all she's done, Nadia says yes and reveals a plan that will keep Katherine alive: She can body jump into someone else, thanks to her traveler roots. Of course, when Katherine admits that she wants to keep her body because she knows Stefan likes it, Nadia realizes it's not her Katherine was seeking forgiveness from, which is a huge bummer considering all of the other disappointments she's faced from her absentee mother over the, well, centuries.

If the promos for January are any indication though, Katherine might be down to just one day to live come TVD's return, making body jumping a much more appealing option. I don't want us to lose Katherine, but I also don't want her to lose her doppelgänger status. Nina Dobrev is never as fun playing Elena as she is playing Katherine. It would be a shame to take that role away from her.

The second half of the season should also address the Augustine vampires, which are being injected with a serum that makes them crave vampire blood instead of human blood. It basically turns them into rippers, but with a lust for vamp blood. It's not pretty and Elena almost fell victim to it already. Will this be the way a beloved character is killed off in the Season 5 finale?