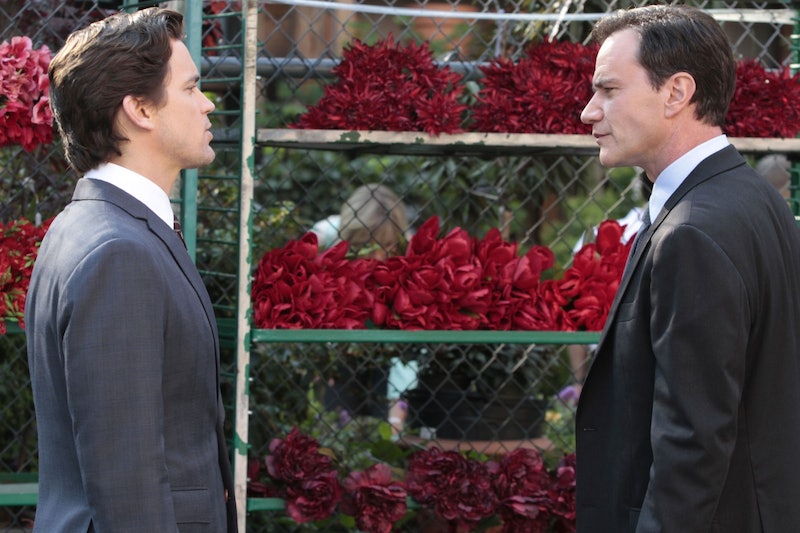 Thursday night's episode of USA's White Collar gave us a little bit of everything we've come to love: Peter Burke and Neal's epic bromantic friendship, a new (smart) love interest for Neal, and a seriously outlandish crime. Burke, who's pretty much turned into the world's most overprotective dad, and Neal were hunting down a dinosaur egg and an illegally shipped T-Rex skull on the loose in NYC. Yes, these things do happen. In true White Collar style, the two managed to use Neal's impressive forgery skills to solve the case, but what impresses us the most is the fact that Neal knows how to perfectly forge a dinosaur egg. When does that talent EVER come in handy?

But back to Burke. We obviously know that Neal's technically "in his care" and "his responsibility" because Burke's the reason he's roaming semi-free around New York. And it's especially important that Burke keeps two eyes on him now that he's been up to something for several weeks, but he's officially turned into the most overprotective father figure. On Thursday night, he convinced Elle to crash Neal's first date with Moscone Codex-aficionado and ex-museum employee Rebecca — who has no idea about Neal's past and who he's been lying to for weeks about every detail of his life so she'll work with him and Mozzie on the Codex. Naturally, Burke and Elle can't resist giving Neal advice — because they have a beautiful, functional, and perfect relationship and we should all take note of this — and suggest that he come clean. Which he does and it works perfectly in his favor because he's Neal Caffrey. Here's five ways Peter Burke's started doubling as Neal's BFF and overprotective dad:

He Watches Neal's Every Move

I know, I know — this comes with the territory of Neal being an internationally wanted criminal who's been captured and now works as a criminal informant for the guy who caught him, but still. Remember when parents could track their kids using their cell phones? We feel like that's the same thing as Burke with Neal's anklet. And he's been keeping closer attention lately, which is good intuition on his part, but still really parent-y.

There's a reason everyone's nervous about bringing their first significant other home, and that's because of situations like this. Burke's brilliant plan to crash Neal's first date reminded me so much of when Kim and Kourtney Kardashian crashed one of Rob's first dates that I couldn't help but laugh. Burke's invested in Neal's personal life and his happiness, which is super parental and SO overprotective.

He Invites Neal To Family Dinner

I feel like Burke has always done this, ever since Neal pushed his way into knowing every detail of his personal life early in the series. On Thursday night, Neal got invited over for dinner (Elle made one of his recipes) and the dinner table set-up was like something from a family sitcom when one of the kids is in trouble or needs advice. Burke and Elle sat on one side of the table and Neal sat on the other. It's as if they're an adorable little family, but their child is actually an international criminal that dad captured on his trip abroad.

Burke's advice about Rebecca was spot-on. Keeping her in the dark was never going to work for Neal if he actually liked her as much as he claimed to. He told Neal to come clean, tell her the truth about his past and to stop pretending that he's an FBI agent and instead tell her about his real job. Honesty is the best policy and because Burke has a role model relationship with Elle, he definitely knows best. He doesn't want Neal to get hurt... or to hurt someone else.

Neal and Burke come clean to each other about their feelings and their worries and concerns all the time. When Burke confronted Neal Thursday night about lying to Elizabeth, Neal came clean about why he hadn't told her yet — because she didn't look at him like a criminal but looked at him in the same way Elle looks at Burke. Sigh, adorable. And Burke offered him a solution to the fear of losing that look because that's what a good overprotective friend-dad would do to keep Neal happy and give him the best chance.

More like this
What’s New On Netflix: 'Stranger Things' & 'Somebody Feed Phil' Return
By Arya Roshanian
What’s New On Netflix: A Victoria Justice Rom-Com & The Return Of David Letterman
By Arya Roshanian
Gillian & Edgar Are At Least Cordial After 'Temptation Island'
By Brad Witter
There Are Only Four 'Temptation Island' Couples Still Together
By Brad Witter
Get Even More From Bustle — Sign Up For The Newsletter