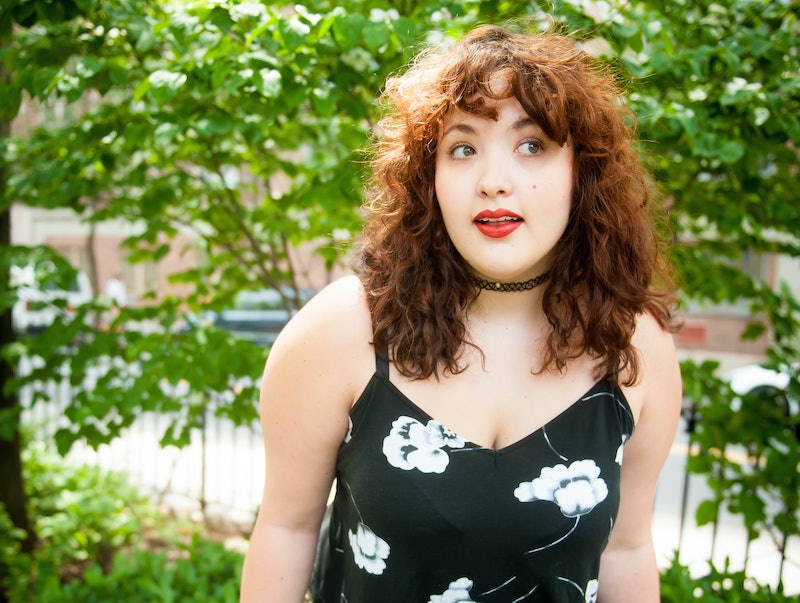 Fat shaming may be obvious to people when you're watching films like Horrible Bosses, in which Colin Farrell's character tells Jason Sudeikis, "I want you to fire the fat people. They're lazy and they're slow and they make me sad to look at." But there are plenty of subtle fat shaming messages that sneak into our everyday lives and go unnoticed. That's why for me, advocating for size acceptance and body positivity has never been just about saying, "Don't be mean to fat people." There's a lot more to overcoming prejudice in our society than simply avoiding blatant bullying. It's the subtle, commonplace things, which are often overlooked but still seeping into our psyches, that I find more troubling.

Body shaming is arguably such an intrinsic part of living in this world that half the time, we don't even know we're doing it. It's pretty "normal" for the fat character in the show or movie you're watching to be the brunt of a joke. It's pretty "normal" to turn on any teen drama and meet a plethora of adolescent protagonists all poking at their bodies with disgust (aka the whole point of the Mean Girls mirror scene). It's pretty "normal" for a thin person to use the word "fat" as a self-identifier in a negative way, without thinking about what that statement means for actual fat people. But should these things be normal? Or should we actively be trying to make things a little easier for future generations of women and men alike?

Here are just 11 subtle ways fat shaming sneaks into our day-to-day lives — because maybe the way to make things better for future generations is to start being better ourselves, as soon as we can.

1. The Correlation Between Weight Loss And Happiness

For as long as I can remember, weight loss has been widely perceived as a ticket to happiness. "When I lose (insert whatever weight loss goal you have here) pounds, I'll be happy." "When I lose the weight, I'll finally travel." "When my waist is smaller, I'll be ready to date again." "When I lose my back boobs, I'll consider sex with the lights on." Whether consciously or not, we've made dieting and losing weight synonymous with joy — and it has to stop.

2. The Praise That Always Comes With Losing Weight

Losing weight can be difficult, and I certainly understand the urge to congratulate your loved one who's taken genuinely healthy steps (aka not embarked on a crash diet) to get to their desired number. However, much of weight loss praise comes with the subtle suggestion that the person looks infinitely better than they did when they were fatter.

When I lost 80 pounds or so as a 14-year-old, people were quick to tell me how good I looked. Humans who'd never bothered to compliment my outfit or hair were suddenly singing my praises. People didn't care whether I'd lost the weight by exercising or starvation. They just saw that my body was smaller, and so it must be better.

This praise wouldn't, of course, seem as problematic if its opposite incarnation was just as prevalent. People gain weight — intentionally or otherwise — all the time. Some of them might love it, some might hate it. But when was the last time you ran into a friend who'd gained 50 pounds and told them how amazing their "new" body was? When was the last time you saw a before and after photo featuring a happy, fat person in the "after" column? For many people, gaining weight and falling in love with their bodies along the way can be revolutionary, so it's about time we sing their praises, too.

3. The Lack Of Aspirational Fat Characters On Our Screens

Although this is slowly changing, thanks to folks like Melissa McCarthy, Gabourey Sidibe, and Nikki Blonsky, it's still incredibly rare to come across a fat character on a TV show or in a film who could be called "aspirational." I've never personally put on a show and found that the fat character in it was the "cool" one, or the one I was somehow supposed to want to emulate. Instead, fat characters are often there to inspire comedic relief.

I want my kids to have a positive fat role model in their Netflix subscriptions. I want them to see that fat people can be anything their straight size counterparts can be: Happy, beautiful, talented, quirky, one of a kind, healthy, intelligent, fearless. I don't want them to turn on the latest Scooby Doo movie, only to have to see Daphne being cursed into being fat (aka the worst thing that can apparently happen to a human).

4. The "Dressing For Your Figure" Mentality

Let's get one thing straight: People are not shaped like fruit. I've never met someone IRL who made me think, "Wow, they really look a granny smith apple," and I'm betting most other people haven't either. Your "figure" is not an indicator of your worth or your freedom to wear whatever you so please, and yet the message that some clothes are only for some bodies has been permeating contemporary culture for decades.

Clothes aren't supposed to be an exclusionary thing, though. Instead of making them tools for body shaming, we should be seeing fashion for all that it can be: A means to self-expression, individuality, and genuine art.

Very often, when someone is expressing qualms with a part of their body ("My arms are so fat." "My hair is so thin." "My body is so curve-less."), our instinctual response is either "Of course not!" or "It's really not that bad." In saying the latter, however, we're implying that having all those traits would be bad, but that luckily the person in question isn't a victim of too-thick or too-flat body parts.

The thing is, there's nothing "bad" about having thick thighs or bony ones. There's nothing "bad" about being shaped differently from your BFF or partner. There's nothing "bad" about not having locks like Blake Lively's. By implying that there is, we're not only insulting anyone who is in ownership of whatever trait we're discussing, but we're doing a disservice to the person we're speaking to. We're reifying the idea that body parts can be "bad" and fueling their negative self-talk along the way. Instead, why not make a point of saying something like "Arms can be fat and beautiful, you know" or "Don't you think it's a little silly to correlating having thin hair to being unattractive?"

Whenever anyone tries to justify their fat shaming with the notion that fat bodies only deserve to be accepted up until a point, they're perpetuating the same old body shaming ideologies we all know. We don't get to decide what groups of people are allowed acceptance, though. We don't get to ask "really obese" folks for a history of their medical records before deciding whether they're worthy of basic human decency.

Not only does this line of thinking tie into concern trolling, but it fails to consider that "obesity" (a category on the BMI scale that simply sheds light on your body's mass and height ratio) "is not diagnostic of the body fatness or health of an individual," according to, you know, the Centers for Disease Control and Prevention.

7. The Comparisons We Draw To Other People

Theodore Roosevelt said that "comparison is the thief of joy," and I agree wholeheartedly. When we think to ourselves "If only I had her legs" or "I just wish I was a little bit shorter/taller/curvier/bustier like my cousin Penelope," we're essentially telling our own heads that there's a "better" way to look and exist than how we're currently doing things.

The simple truth is that there is no right or wrong way to look. There's no one body type that's going to make your life any more fulfilling than it is now. That fulfillment has to come from inside you. By constantly comparing ourselves to other people, we're saying that we aren't aesthetically "good enough" as is, and that's the easiest way to crawl into a self-body-shaming spiral of doom and hopelessness.

8. The Constant Analysis Of Other People's Bodies

Why do we care how much weight our co-worker put on during the holidays? Why do we care that so and so looks like she got a boob reduction? Our relationships to our bodies are our's alone, and it's high time we stop imposing our beliefs about beauty onto others. Of course, everyone has aesthetic preferences, and that's perfectly OK and normal. Analyzing the bodies of those around you and picking at the way those bodies have changed or stayed the same, however, is destructive. And when we do this in front of kids? Well, we're basically encouraging all future generations of the world to stay as snarky and judgmental as the current one.

9. The Assumptions We're Supposed To Draw About Characters Based On Their Size

Rewatching Jurassic Park as an adult, I couldn't take my eyes off of Dennis Nedry, the computer programmer smuggling dinosaur embryos off the island and essentially the story's main baddie. When he wasn't eating, he was most often depicted at his computer, empty soda cans and snack wrappers decorating his space. At the end of the day, people have every right to eat how they want to eat (whether that diet has been deemed healthy by a medical professional or otherwise), but it's remarkable how often the message that fat people are lazy, unhygienic, "overeating" villains gets airtime.

The next time you see a fat character in a movie, ask yourself what assumptions you're supposed to draw about their personality/morality based on their size. If it's that they're evil or ugly or lazy or all-around gross, then you, friend, are victim to the subtleties of fat shaming.

It's never OK to monitor another person's diet (except, perhaps, when you're a parent with children who can't make their own food). And it's never OK to correlate your worth or morality or character with how many hot dogs you ate in a week. Yet food shaming (both of ourselves and of those around us) is one of the most common and subtle forms of body shaming out there. Whether you're chastising yourself for eating "too many" cupcakes, or silently judging your co-worker for having greasy pizza for lunch four whole days in a row, you're tying food to worth.

11. The General Lack Of Media And Ad Representation Of Anyone Who Isn't White/Cis/Able/Slender

Someday, I want to see a version of Friends or Girls that has as much diversity in its cast as possible. From people of color to non-binary folks to fat protagonists to disabled characters, our general media needs more diversity. Whether we're talking about selling mascara, wearing the latest fall collection from a favorite fast fashion line, starring in a Netflix original series, or getting page-time in Vogue, the more types of bodies we begin seeing, the better.

The marginalization of groups of people undoubtedly stems in part from the media not embracing those people, because the images we see correlate to our interpretations of "normality." Besides Orange is the New Black , few efforts in media have combated this problem. And that lack of representation and visibility is one of the most subtle yet poignant forms of normalized body shaming.

While fighting against all these subtleties is going to take a lot of time, a lot of effort, and the work of many, many activists, perhaps being mindful and aware of them is a good place to start. Perhaps bettering ourselves, one at a time, is how we better the culture.