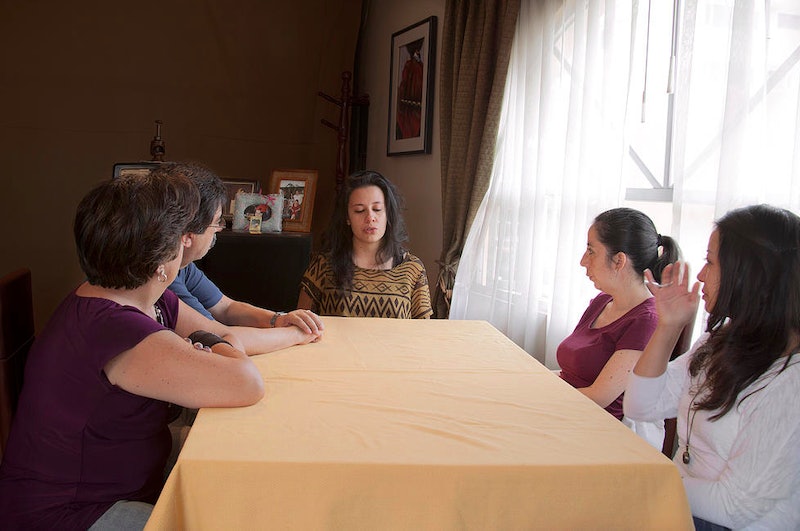 When documentary photographer Paola Paredes came out, she made the brave decision not just to share the incredibly personal, vulnerable moments with her family, but with the rest of the world, as well. In a hugely powerful series, 29-year-old Paredes photographed herself coming out to her family after years of feeling like she needed to keep it hidden her entire life growing up in Ecuador. She set up a camera that clicked every five seconds and bore witness to every emotional exchange between her, her parents, and her sisters. With her family's blessing and support, she has decided to share these moving images in a project titled "Unveiled," hoping to use her family's journey to help someone else who may be facing the same challenge opening up to their own families about their sexuality.

As for the inspiration for the medium for this particular project, Paredes tells Bustle:

I dismissed that idea because it seemed too crazy. But that thought would not leave me alone. I had never had any intention to come out before. I was convinced I probably would have never done it. But the idea of capturing it in photographs made it all of a sudden appealing. I like storytelling, and I thought this would be an excellent opportunity to tell one. That gave me the push I needed.

The camera offered a distinctly unique perspective of the scene, shuttering every five seconds during the conversation. Paredes said on the project's page that she and the rest of her family were immediately unaware of the click of the camera, entirely engaged in each other.

"And then, through the blur, voices reached out to me. ‘We don’t care.’ ‘We love you.' My mum and dad broke their stillness as one; their tears matched my own. Their hands reached for mine," Paredes shared on her website.

"I wanted to make it a photographic project because photographs allow you to freeze a moment in time," Paredes shared with Bustle. "When you look at the photos, you can see so many details, which can maybe be lost in a video. You can also revisit a photograph as many times as you want. I've seen the photographs so many times, but when I start looking at them again, I always discover something new. Photographs also gave me the ability to have a slow-paced form of storytelling. In video things just happen faster, it's rare that someone would rewind just to re-watch the moment."

Paredes said that already people have reached out and shared their own personal experiences with her, inspired after seeing the images. Among them the one that most resonated with Paredes was a girl from her own native Ecuador who reached out to thank her. "I felt reassurance in why I had done the project in the first place. I made sure to write her back, and we are in touch now," Paredes shared.

"If ‘Unveiled’ can help even one person come out of the closet then I would have achieved my goal."