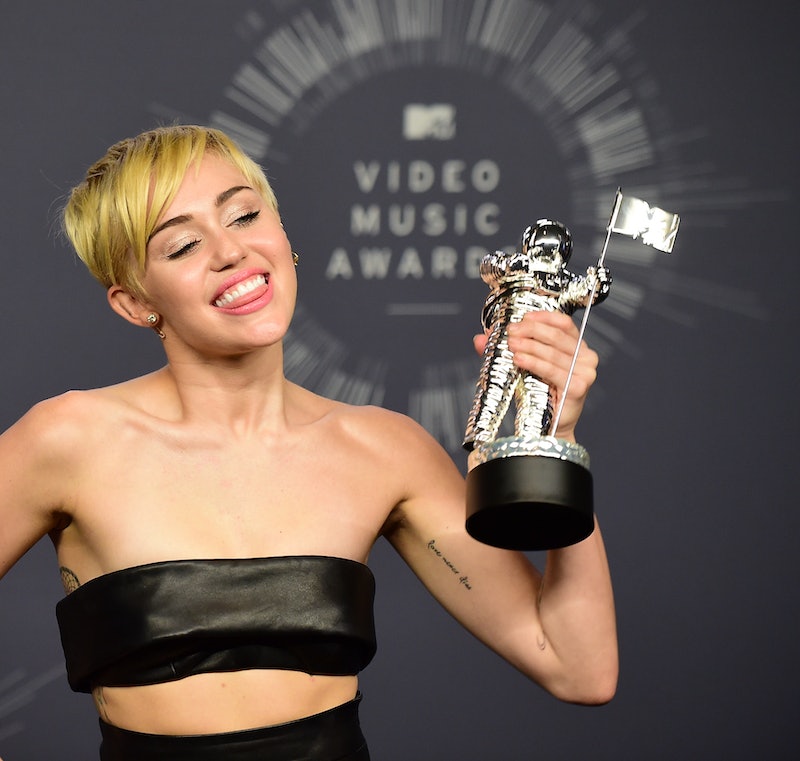 When MTV first announced that Miley Cyrus is hosting the 2015 Video Music Awards, I was pretty pumped about it. Love her or hate her, you can't deny that Cyrus is super entertaining, and no matter what she has up her sleeve for Sunday night, it's gonna be good. The only problem? Cyrus and MTV faced a ton of backlash after the foam finger/Robin Thicke incident of 2013, so I was worried the network would ask her to dial things back to avoid history repeating itself. But there's good news. MTV plans to give Cyrus "free reign" over her hosting duties on the VMAs, so things could get pretty crazy.

While talking to Entertainment Weekly, VMA producer Garrett English said that in the interest of keeping spontaneity that the show is known for, nothing is off limits for Cyrus. Good for her and good for us, because an uncensored Cyrus is going to be so much fun to watch. English said,

We’re giving her pretty free rein. Obviously there are standards and various other things that were always a part of it, but no, [no rules]... It never comes from a place of trying to limit the range, it’s always coming from a place of trying to open up the full palate. Miley has been fantastic. It was sort of a logical extension of conversations that we’re happening. Both her camp and ours were immediately excited by it.

Miley Cyrus with no rules? I'm so ready. Of course, it's totally possible that this will end up a disaster, but Cyrus' control over the show more likely means that everyone will be talking about it for weeks to come and that it's going to be awesome.

Ahead of the awards — which air Sunday, Aug. 30 — I have a few predictions now that we know Cyrus can basically do anything she wants.

Let's suppose that Cyrus' nude latex jumpsuit was worn when the rules she was working under were stricter — can you imagine what she'll be wearing now that the rules don't exist? I'm hoping that at least one of them is used to mock Hannah Montana.

You know, drug references, sex references... anything that your grandma wouldn't want to see on the VMAs. Unless she's a cool grandma, in which case it'd probably be everything she would want to see. I'm thinking we will see Cyrus pay homage to pot at some point, because this is Miley Cyrus were talking about.

Some Sort Of Reenactment Of The Robin Thicke Incident

Maybe she'll come out wearing his Beetlejuice-esque suit. But being that the whole foam finger thing is exactly what people think of when they think of the VMAs, I think it'll come up at some point or another during the show.

Basically Anything Meant To Shock The Audience

I have a feeling the shock value of this particular night of television is going to be through the roof... and it's going to be amazing. Tongues everywhere!

Want more VMAs fun? Check out our video below to make the perfect VMA-themed cupcakes!