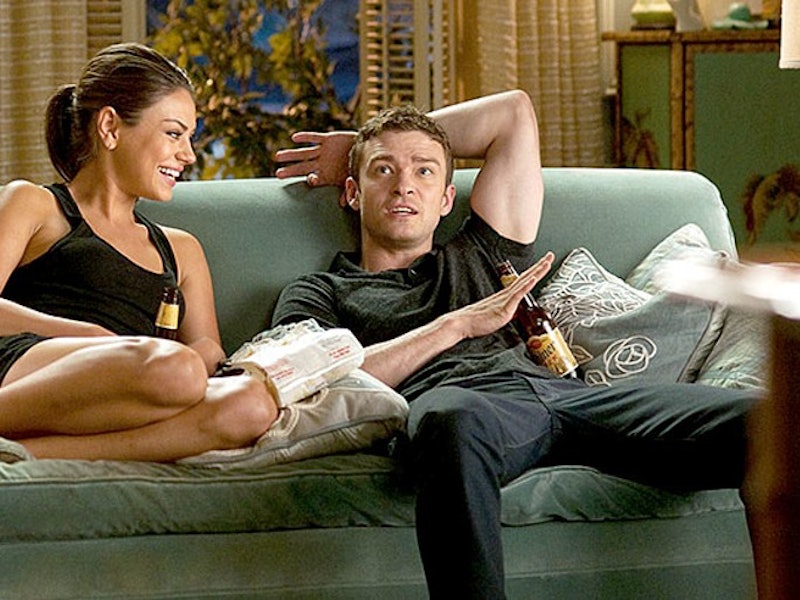 Although the movie Friends with Benefits wasn’t released until 2011, the majority of us had already been there, done that, or were probably about to do so sometime in the near future. Having sex with someone who’s just a “friend” isn’t a new concept for anyone, and frankly, for most of us it’s a great arrangement to have until our next relationship comes along. It may not substitute the love and partnership that comes with a relationship, but it fills a need, is casual in nature, and according to a new study by the UK sexy toy brand Lovehoney, two-thirds of women have had a friend with benefits.

The recent study examined the sex lives of 1,600 people and found an interesting fact: When it comes to friends with benefits, women are more suited than men to pull of the casual sex thing. Not only are women more suited to be able to the handle the arrangement, but with 64 percent of women having had NSA sex while only 51 percent of men have, we far more into it, too. Of course we’re cognizant enough to know it’s not likely to lead to the ending in Friends with Benefits, where Justin Timberlake professes his love for Mila Kunis via a flash mob, but really, who wants a flash mob anywhere near their real life?

"These arrangements for casual sex seem to work particularly well for women who miss intimacy when they are single but prefer to sleep with someone they are familiar with,” explained a spokesperson for Lovehoney in a press release. It is interesting that FWBs are no substitutes for more committed partners. Less than one in 10 men and women have swapped that special person in their lives for a FWB."

Here are eight other tidbits to know about friends with benefits based on Lovehoney’s research.

1. Women Are More Prone To Have More Than One FWB At A Time

Not only are we better suited for the sex buddy thing, but we can juggle it like whoa. According to the study, 23 percent of women have had more than one casual sex buddy at a time, compared to only 20 percent of men who have.

2. The Majority of FWB Hookups Don’t End Up In A Relationship

3. More Men Than Women Think Having A Friend With Benefits Is A Good Idea

Women may be better suited for the situation, but when asked about it, men are likely to think it’s a doable arrangement, with only 63 percent of women giving it the stamp of approval compared to the 70 percent of guys who think it’s a good idea.

4. Work Colleagues Account For More Than A Quarter Of FWB For Guys

According to the study, 28 percent of men have had a colleague who was a sex buddy, while only 20 percent of women could report the same. Of those who did have workplace sex buddies, a third of the women and 43 percent of the guys had had sex in the office.

5. More Women Then Men Have FWBs

Of those participants researched, 50 percent of women had one to three FWBs, compared to only 41 percent of men. When it came to having four to six FWBs, again women had more at 12 percent, while only nine perfect of guys had had that amount.

6. Most Of The Time Partners Are Safe From Being Dumped For An FWB

A quarter of both men and women had major problems with their partner staying in touch with a former FWB even if there was no more sex going on, which is totally understandable. But the study also found that partners are very rarely dumped for an FWB, with only seven percent of women and six percent of men saying adieu to a relationship for a sex buddy.

However, 18 percent of women and a fifth of men have cheated on their partner with their FWB.

7. Over A Third Of Women Have Relationships That Become FWB

While trying to get a sex buddy to be your full-time boyfriend might be tricky, for 32 percent of women and 28 percent of men, they were able to keep the sex part of their former relationship in tact after a break-up.

For women, it’s better to get in, have fun, then get out. The most popular length of time for them to have a sex buddy is three to six months (at 12 percent), with 11 percent of women, prolonging their FWB situation for up to a year. Guys, on the other hand, want something far longer with 14 percent of them wanting an FWB relationship for two years. Although 13 percent were content with an FWB relationship that lasted six months to a year, two years was the most popular.

More like this
Here’s How To Reignite The Spark In A Sexless Relationship
By Vanessa Marin
Are Gemini & Leo Compatible In A Relationship?
By Kristine Fellizar
I'm 42 & I've Never Had Sex. Is It Too Late?
By Sophia Benoit
Here’s How To Deal With Sexual Frustration If You Don’t Want Casual Sex
By Annakeara Stinson and Mackenzie Sylvester
Get Even More From Bustle — Sign Up For The Newsletter