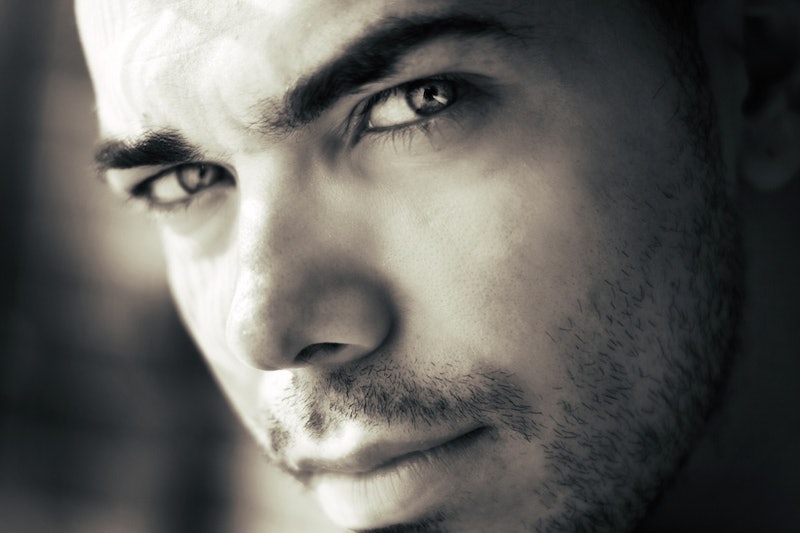 If you're about to live with a dude — a housemate, a lover, anybody — and are going to be sharing a bathroom, you may want to give them this list of basic pointers about what happens to your body once a month. Because without a little education, you may end up getting some questions that leave you with a blank face and them with a red one. I've heard reports of everything from "What is THAT thing?" (about an applicator tampon) to "Are you going to gush all over the shower?" to "So does it hit the wall if you aim it right?" Yes, really. And these were not from young, callow youths.

Of course, you may have been blessed with a life full of dudes who fully understand periods, but some of them — from bosses to family members — still have strange misconceptions about what the monthly menstrual cycle actually is and how it works. Underlying assumptions about periods are widespread because, as a culture, we still get a bit freaked out by talking about it openly. Period jokes are Amy Schumer-style, cringe-comedy, serious-disgust territory — and men in particular don't get a lot of open discussion about the realities of periods, in part because many cultures still have taboos about women who are menstruating, with ideas about "uncleanliness" and "impurity".

It's not, for most of us, a big deal; though the few of us who suffer from extremely painful periods and very heavy flows will surely need more nuanced understanding and personalized explanations.

Talk to a man about periods today! Here are six main points to hammer home.

OK, I'll elaborate. Periods don't just involve a blood-gush like something got loose in a water pipe. As women will know, the clotting action of blood and the shedding of the uterus lining mean that blood flow and texture will differ considerably throughout the five to seven days of the period. An ordinary period is not like blocking a fire hydrant. We aren't going to explode if we don't take a tampon out.

2. Our Period Isn't Going To Be The Same As Your Ex-Girlfriend's

I've known a few dudes who got a complete handle on the periods of their girlfriends, only to break up, find another one, and be mystified by the new process. It's not that some girls whine more — period pains and symptoms genuinely differ across the female population. Some women will report serious back ache, others will have tenderness in the nipples, others will have the sort of cramps that would fell Usain Bolt.

It's a personal mix that's determined by all kinds of factors, from hormone levels to weight to medications to contraceptives to age. And serious conditions, gynaecological and otherwise, can lead to heavier periods or worse symptoms. Thyroid problems, for instance, are a known factor. Here's a fun game; try to guess the type of period a woman has, just by looking at her. You will lose.

3. If You're Going To Buy Us Painkillers, Know That Some Are Better Than Others

The painkillers you buy a woman on her period have to be specific. They're called NSAIDS, or non-steroid anti-inflammatory drugs. The reason behind this is that period pain is rather like joint pain or the pain after an injury: the pain itself is caused by the production of something called prostaglandin, which (in this instance — they actually have a lot of uses) are the agents behind stabbing aches and inflammation.

NSAIDS include ibuprofen and aspirin, and they target prostaglandin production, so that the cause of the period pain stops in its tracks. Some people are allergic to NSAIDS, though, so always ask your girlfriend before booking it to the pharmacist to get some.

Pre-menstrual syndrome is an authentic problem, but it's not worth the sheer amount of misogynist jokes that have been shed about it over the years. And, like basically everything else in this scenario, it will differ between women. The Mayo Clinic tracks PMS sources to two things: hormone fluctuation through the menstrual cycle, and chemical changes in the brain, including fluctuations in serotonin levels. This last one, and its corresponding dip in mood, is only seen by scientists in some women, though, and is definitely not universal.

And, by the way, men are affected by hormonal shifts as well. They can enter their own version of menopause after 40, where the levels of testosterone in their body begin to drop — it's not universal, but it's not uncommon, either. And there's a hypothesis around about something called 'irritable male syndrome,' which theorizes that men, like other mammals, have mood swings and corresponding irritability of their own across a mating cycle. So we're not the only hormonal ones.

5. Tampons Do Not Cause Us To Lose Our Virginity

This is a common myth among women as well, and it's due to a misunderstanding about the nature of the membrane inside the vagina in virgins (the hymen). Many people believe that it's some kind of bubble-like surface that instantly cracks, rips, or blows apart the second something substantial hits it hard enough — a penis, a tampon, whatever. The truth, however, is that the hymen radically differs in thickness between women, and that it's actually more like a perforated piece of paper.

Hymens are very stretchy and, in many women, simply develop larger and larger rips over time, sometimes in many different places (some hymens, unusually, can look like honeycomb). Tampons aren't designed to make hymens break; the period makes its way out whether you have a hymen or not. The only time virginity can be lost is when you actually have sex; that's it.

Period sex is entirely possible, even awesome (and yes, you can still get pregnant, so use protection). The real problem for most women, if they have one with period sex, won't be the blood flow — it's the increased sensitivity of the vagina and surrounding areas because of the menstrual cycle.

A debate over at The Frisky outlined several of the benefits of period sex, including more lubrication and arousal; they also pointed out that the increased sensitivity of a woman's intimate areas can also be a benefit, because it can be easier to achieve orgasms (vaginal, clitoral, etc) while on the rag. Frankly, however, there's one element that can't be fixed by the lure of extra orgasms: if anybody manages to hit the cervix during intercourse, the game is probably over, so be careful about that.

More like this
I'm 42 & I've Never Had Sex. Is It Too Late?
By Sophia Benoit
5 Crystals For Anxiety
By Megan McCarty
5 Crystals To Manifest Better Sleep
By Megan McCarty
Your Moon Sign, Explained
By Nina Kahn
Get Even More From Bustle — Sign Up For The Newsletter