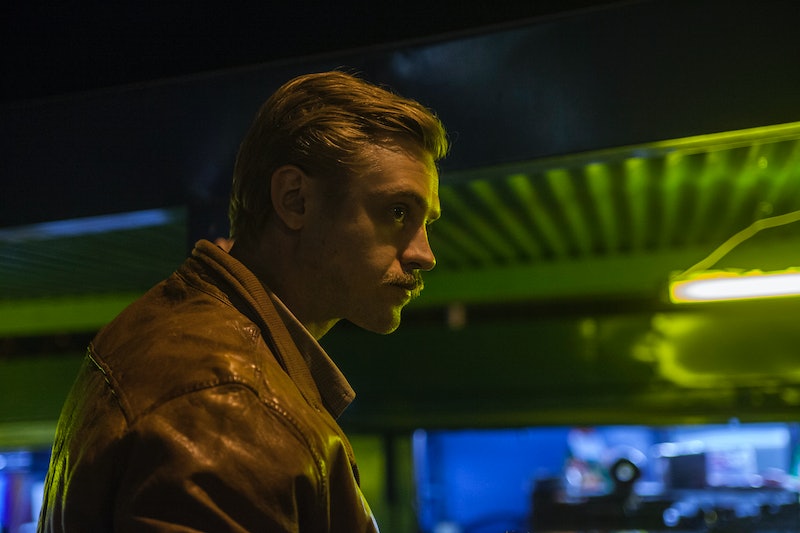 Netflix's newest series is an engaging, wildly interesting story about the rise of the Colombian drug trade and the DEA Agents looking to capture and kill the man who started it all: Pablo Escobar. Narcos has already been renewed for Season 2, and it's not difficult to see why. The show is fascinating, moves at a great pace, and still has so much potential for all of its characters. One of the main characters that has received quite a bit of development however is Steve Murphy, the series' narrator and the DEA agent tasked with the Escobar assignment. As the entire series is based on real life events and people, it's hard not to wonder how historically accurate Steve Murphy is, considering actor Boyd Holbrook is playing a real person, but is also tasked with being the one to drive the story forward. For many series, this can lead to inaccuracies in the name of storytelling.

Thankfully, there are quite a few similarities between Murphy and the character, primarily because the real DEA agent and his partner at the time of the events, Javier Peña, were consultants on the Netflix series. In an interview with Men's Journal, the real Murphy and Peña revealed that Holbrook and Pedro Pascal (who plays Peña in the series) were taken to the DEA Academy in Washington and spent one week training with the real men and women who work in the field every day. According to Murphy, the two actors "did very well" and "took it very seriously." It seems Holbrook and Pascal were hellbent on truly understanding their characters and their jobs on a detailed level.

But, there was more to the actors' education than training exercises. Murphy and Peña also revealed that in their roles as consultants, they shared their personal stories of their quest to take down Pablo Escobar, including the types of weapons they used, surveillance tactics, questions about their informants, etc. But, when Holbrook was asked by Collider.com about his process of playing a real life character, he said what most actors in his position say: At the end of the day, he had to find a way to make even this character his own.

I was on the fence about whether I should meet Steve before, or just not meet him at all, but I met him and became close with his family. He’s adopted two little girls from Colombia, which shows you the kind of guy he is. He came down to the set and that’s when I realized that I forgot I was playing this person.

What struck me from interviews with Murphy and Holbrook's portrayal is that they do in fact share quite a few similarities. For one, the dry sense of humor and sarcasm that Holbrook has when playing Murphy seems pretty accurate. It's not that he's purposefully trying to crack people up, much like Murphy on Narcos, it's his whip smart one-liners that are just clever and totally appropriate for the situation at hand. Murphy's courage, his unwavering need to go "into the lion's den" was a trait Holbrook told The Guardian he thought was really honorable, a trait he seemed in many ways to try and emulate in the series.

Plus, Murphy's initial narration of Peña — specifically the line, "This is the a**hole" — comes from a shred of truth according to the real Peña who explained that he didn't totally get along with many people in the embassy, and Murphy and Peña explained they kept a little distance at first from one another.

As more interviews with Murphy and Peña are published as we get closer to Season 2, whenever it may be released, it'll be interesting to see what other similarities arise between the real men and their onscreen counterparts. But, of course, it's important to the remember that the series is historical fiction, and sometimes things are going to be distorted from real life events for the sake of storytelling. Although, judging by the ever-growing multitude of Narcos fans, they don't seem to mind!

More like this
Does The 'Echoes' Ending Mean There Will Be A Season 2?
By Kadin Burnett
Netflix Reveals First Look At Wednesday In The 'Addams Family' Spinoff Series
By Bustle Editors
Who Plays Trent In 'Never Have I Ever'? Benjamin Norris Calls His Character A “Himbo Stoner”
By Grace Wehniainen and Radhika Menon
A 'Schitt's Creek' Star Just Signed On For 'Sex Education' Season 4
By Bustle UK
Get Even More From Bustle — Sign Up For The Newsletter