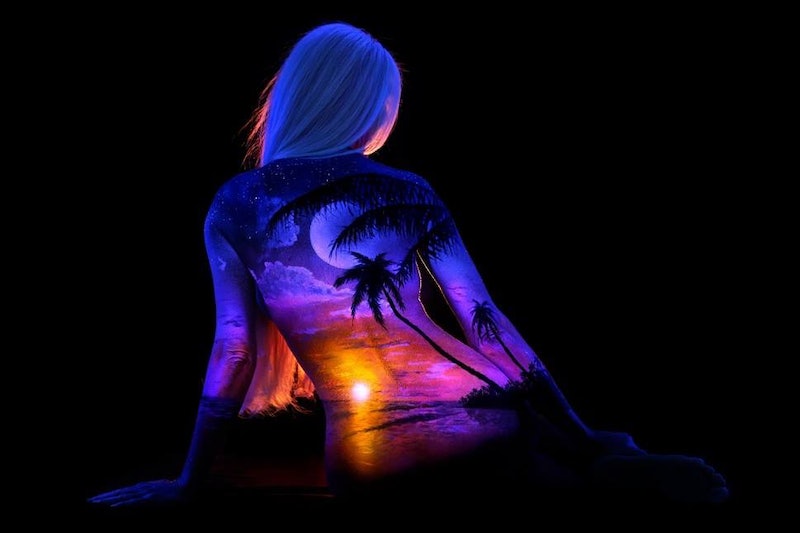 John Poppleton has a stunning series of fluorescent pigment landscapes painted on bodies, and they are almost too breathtaking for words. He specifically takes authentic photographs of women under UV light, which makes the process possible. He works a lot with black light, and his photographs capture the vibrant colors that the lighting brings out. Imagine going to a rave in Ibiza, and seeing the glow of colors under a black light? It's like that captured in a photo. Except with a lot more nuance. And, for that matter, a lot less rum and a lot more artistry.

Poppleton, of Poppleton Portraits, is based out of Utah. He's been in photography since his junior year of high school and was pursuing it as a hobby until becoming a professional wedding photographer. He was inspired by black light, and the colors that it revealed about five years ago, and has been working with UV light ever since. Poppleton works out of the commercial storefront studio next door to where he lives. (A commute I'll be forever jealous of.)

"This series was brought on by boredom with the wedding/portrait work I had been doing for over 20 years," Poppleton shared with Bustle in an e-mail. "I never planed on or wished to become a bodypainter. It just happened gradually, over the course of about three years of just playing with black light photography."

He is undoubtedly a testament to the fact that sometimes your calling really does find you, if you're lucky. Here's a look at Poppleton's artistry:

Where do I sign up for being one of the women that has planets erupting all around her?

And also, where do I sign up to get this lady's hair?

For more of Poppleton's work, visit his Facebook page.