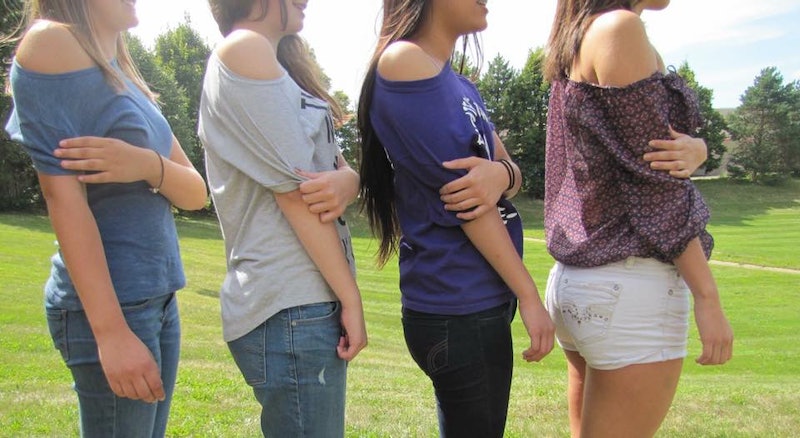 Dress codes have been a hot topic this year. From the young woman whose prom dress was deemed inappropriate to the female students who were forced to wear "non-white" tee shirts over their bathing suits at a school pool party, dress code controversy is everywhere. Now, high school students protesting bare shoulders at McHenry East and West are going viral with their cause to change the code, and it's a totally inspiring, body positive display of girls supporting one another.

The debacle started when sophomore Hailey Everhart realized the sexist nature of McHenry's dress code, especially when it comes to the reasoning behind the stricter regulations on girls. She told NBC5 Chicago, "You can show anything but your shoulders. That's all they care about. Boys don't really wear as much that shows their shoulders where girls do."

Everhart and her fellow female students didn't just let their opinions go. Instead, she and friends Dani Herreweyers and Courtney McIntyre basically started a social media movement, creating a Facebook page and an Instagram account that centers on fighting the sexist dress code, promoting acceptance of women's bodies, and asking that instead of girls clothing being restricted, young men be taught not to see women as sexual objects.

One of the best aspects of the girls' decision to fight back is the many posts by fellow teenage girls that have been shared. These comments have young women expressing their support and describing how clothing makes them feel comfortable with their own bodies.

Protests have been scheduled twice in show support for the #ShowYourShoulders campaign, but both times, senior girls have stepped in to seemingly help form a bridge between the administration and the sophomores who began the McHenry movement. While sadly the protests may have been cancelled, it's the willingness of these young women to come together to achieve a targeted goal that's truly inspiring.

Their cause is a worthy one, and it's an issue that needs to be addressed. Alongside the issue at hand though, I can't help but take note of the sheer amount of girl power going on in this high school, and I love it.

The administration of McHenry has released a statement regarding the protests and dissatisfaction with the dress code saying, "The dress code policy is conducive to the district as well as the students. It's unfortunate that some parents and students don't adhere to this policy." While I'm always hopeful that positive change will come from these moments, the girls still seem to have quite the battle ahead of them, but I can't wait to see what they do with this incredible platform.