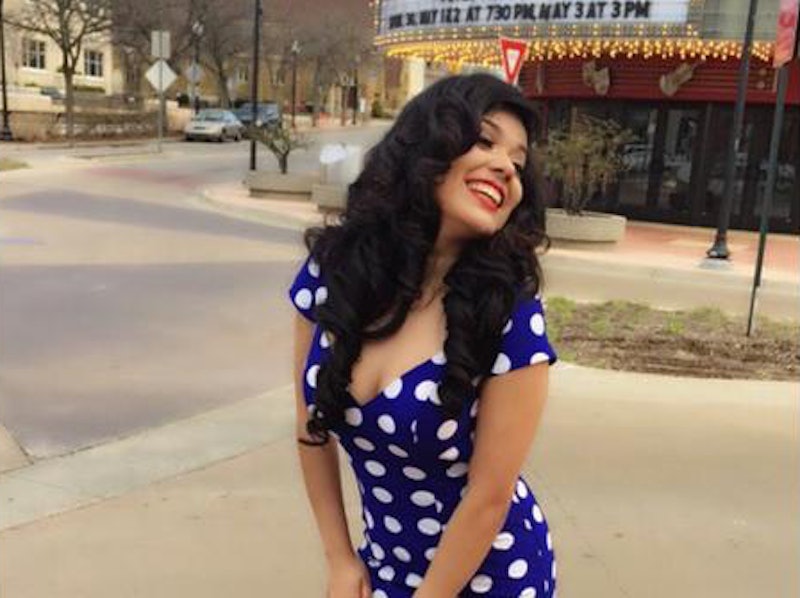 Another day, another dress code scandal. Muskegon High School senior Mireya Briceno was kicked out of prom after an hour for wearing a dress members of the administration deemed too revealing. The mermaid-style blue and white polka dot dress fell to the floor and featured short sleeves and a v-neckline, much like any run of the mill prom dress, but cutout in the back was what drew attention from school officials.

Cutout gowns are a huge trend for prom, and Briceno looked stunning in her '50s-inspired ensemble with red lips, big wavy hair, and stunning accessories that tied the look together. The student posed for prom photos with her boyfriend that she posted to her Twitter just before the dance, looking happy as can be. Unfortunately, the levity wouldn't last.

According to Cosmopolitan, the high school's dress code states that "when you look at yourself in the mirror, there should be no skin showing around the midriff area." With the front of the dress being completely covered, it's hard to tell how her exposed back could have been breaking the rules. Briceno's mother doesn't understand why she got kicked out of the dance, telling Michican Live that "she was classy and elegant."

But the school's principal, Brad Perkins, believes that the school has addressed the matter to the best of their ability. When asked about the incident, Perkins told Bustle in an email:

We will be sure to inform students better about their rights to bring concerns of dress to me the High School Principal at the time of concern so the issue can be resolved or addressed in the proper manner and in a timely fashion. Two other students whom had concerns, came to me, resulting in a solution and return to the prom. In the case you are asking about the student left Prom after attending for approximately an hour did not question nor seek solutions to the issue.

He added that the student-run dance is always looking for ways to improve and that the school is moving forward from the incident.

Briceno didn't cause a stir the night of the dance and left shortly after school officials asked her to go, but that didn't stop social media from taking notice. According to her Twitter, many people have utilized the hashtag #StandWithMireya to demonstrate their support.

Prom dress scandals have been in the news a lot lately, and Briceno is far from the only teen who has been asked to leave a school dance due to the way she was dressed. According to Gurl, there were at least seven cases of students being asked to leave school events because of their outfits in 2014, for reasons ranging from cleavage to parental complaints.