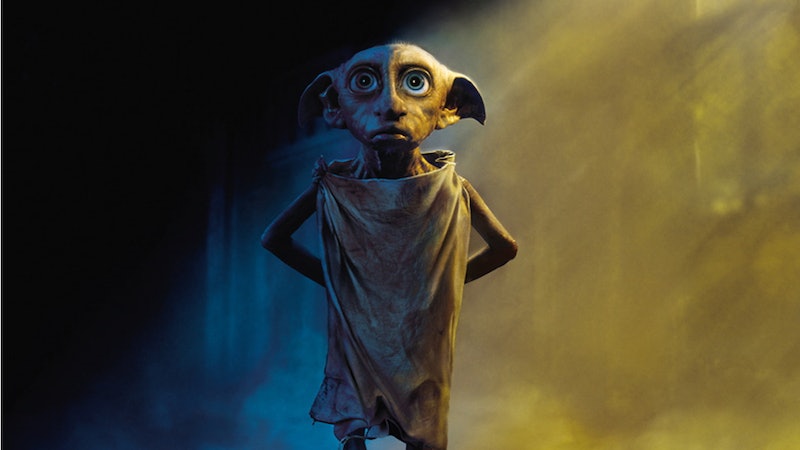 Growing up as part of the Harry Potter Generation taught us so many things. Harry, Ron, and Hermione taught us the importance of friendship. Ron and Hermione, Harry and Ginny, and so many others throughout the series taught us about love. There were lessons about magic and family and acceptance, and far too many other things to list in just one article. But one thing was for sure: As the series went on, it become abundantly clear that J.K. Rowling was going to teach her dedicated fans how to deal with the loss of some of their favorite characters.

To be fair, the series starts off that way; Harry is an orphan, after all. We maybe could have seen the foreshadowing there, but we were just kids! And it got worse. It got much, much worse. Rowling made us love so many characters, only to take them away later on. Or in the case of Cedric Diggory and Colin Creevey, much too soon.

The death count rose alarmingly towards the end of the series, and as it did so, it got more and more heartbreaking. Cedric was sad in Goblet of Fire, but then you have Sirius in Order of the Phoenix, Dumbledore in Half Blood Prince, and of course, the events of Deathly Hallows, which left most of our books tear-stained. Here are the 25 major deaths of the series, ranked by sadness.

This isn't really a question, right? This was not sad at all — in fact, Voldemort's death probably warranted cries of happiness when you first read the scene.

Nagini always terrified me. I mean, an enormous snake that ate people on command would scare any kid. And the movie version was even worse! Her death didn't bring tears to any eyes, I'm sure.

She killed Sirius Black, Harry's last shot at a family. And she was happy about it. Plus, just look at her; she was more than a little scary. Bellatrix should probably be tied with Voldemort, if we're honest about it.

Last words: "What will happen to your children once I've killed you? When Mummy's gone the same way as Freddie?"

Pettigrew made his first appearance in Sorcerer's Stone and no one even knew it. Wormtail was with them all along, waiting for the day he could once again serve Voldemort. He did all kinds of things that made even a rat's body too good for him, but mainly, HE BETRAYED THE POTTERS!

Last words: "Stand back. Stand away from the door. I am coming in."

He killed unicorns to sustain his master. And of course, there was that small matter of Voldemort living on the back of his head. Still, you couldn't help but feel a little bit bad for him, as Voldemort was technically making him do those things.

Grindelwald's potential to become the most dangerous Dark Wizard was stopped by Dumbledore in what is considered to be the most epic duel between two wizards. He was eventually murdered in prison by Voldemort, so no love lost here.

Last words: "Kill me, then! You will not win, you cannot win! That wand will never, ever be yours —"

Kind of sad, because he worked at the Ministry of Magic. But then again, he was kind of intense, and so was his son. Barty Crouch, we hardly knew ya.

Last words: "I'm sure your parents would be very proud of you today."

Speaking of characters we never knew, Gregorovitch never even had a chance when facing Voldemort, who tracked down Gregorovitch for his memories to find the wand. Ultimately, Gregorovitch was no use to Voldemort and was killed by the Dark Lord by the Killing Curse.

He was mean, and tortured Harry and the rest of the Gryffindors for their entire time at Hogwarts, but he didn't necessarily deserve to die.

Poor, poor Frank. He was just the groundskeeper, and he walked right into Voldemort's (and Nagini's) path.

Last words: "My Lord,' is it? Well, I don't think much of your manners, my Lord. Turn around and face me like a man, why don't you?"

The professor of Muggle Studies and a great believer in the equality of wizards and muggles, Charity Burbage was killed by Voldemort, in a scene that was sad in the book and terrifying in the movie.

Author of the infamous History of Magic textbook and a kindly old woman, Bathilda Bagshot lived well into old age, and the way she had to die was terrible. She was later inhabited by Nagini, too, when Harry and Hermione visited Godric's Hollow.

When it came to Aragog, I was always firmly on Ron's side: "Why couldn't it be follow the butterflies?" But Hagrid's devastation at losing his friend was enough to bring tears to anyone's eyes.

The Tri-Wizard Tournament took a turn for the tragic when Cedric Diggory never made it out at the hands of Voldemort. You'll never forget watching his dad scream in pain realizing his "boy" had died. Our first glimpse of Robert Pattinson and a lovable Hufflepuff, Cedric was gone way too soon.

Colin was so young, and so enthusiastic, and just wanted to help Harry. In the end, he died doing just that at the Battle of Hogwarts at the hands of Death Eaters.

Lavender Brown might have kept Ron and Hermione apart, but she was completely in the wrong place at the wrong time, and 100 percent didn't deserve to die — especially not at the hands of Fenrir Greyback.

She made it so far. She was there for Harry when no one else was, and when she was confined to a cage in the Dursley's house. When Deathly Hallows was released, I'm pretty sure readers everywhere sobbed a collective "NOOOOOOOOO" when Hedig died.

The real Mad Eye, of course. He was on the side of the Order of the Phoenix until the very end, and he was one of the toughest of the group. His death seemed unlikely, which made it all the more painful when it happened.

She and Lupin were finally together, and they had a son, and IT'S JUST NOT FAIR, OK? Plus, Teddy was left an orphan, starting the whole parentless child saga over again. At least Teddy has an amazing group of people to look out for him.

Last words: "Have you seen Remus?"

I'm pretty sure I cried when Lupin left Hogwarts at the end of Prisoner of Azkaban, so you can bet that I was a mess after this loss. Lupin was the father figure Harry never had, especially when Sirius wasn't (or couldn't be) around. He had a wife and a son, and he could have done so much more good in the wizarding world. I'm still not over it.

Last words: "Sorry I will never know him ... but he will know why I died and I hope he will understand. I was trying to make a world in which he could live a happier life."

If "Dobby has no master. Dobby is a free elf," and "Here lies Dobby, a free elf" don't make you cry to this day, are you even human?

I really and truly thought that Dumbledore was untouchable. I think that was what made his death so shocking. It happened so fast, and even then, I remember thinking "He'll be back." But alas, poor Albus. And poor readers.

"After all this time?" "Always" might be the most heartbreaking exchange in literature. Snape was definitely a pretty awful person throughout the series, but the more we learned about him, the more we couldn't help but feel bad for him. Like, really, really bad.

He was Harry's last shot at a real family. HIS ONLY FAMILY. And Bellatrix Lestrange took it away. I will truly never, ever get over this one. I cried more at Order of the Phoenix than maybe any other book, and I'm not sorry about it.

Last words: "Come on, you can do better than that!"

I'M NOT CRYING, YOU'RE CRYING. After all this time? Yes, still. Always, always crying.

Last words: "You actually are joking, Perce ... I don't think I've heard you joke since you were—"