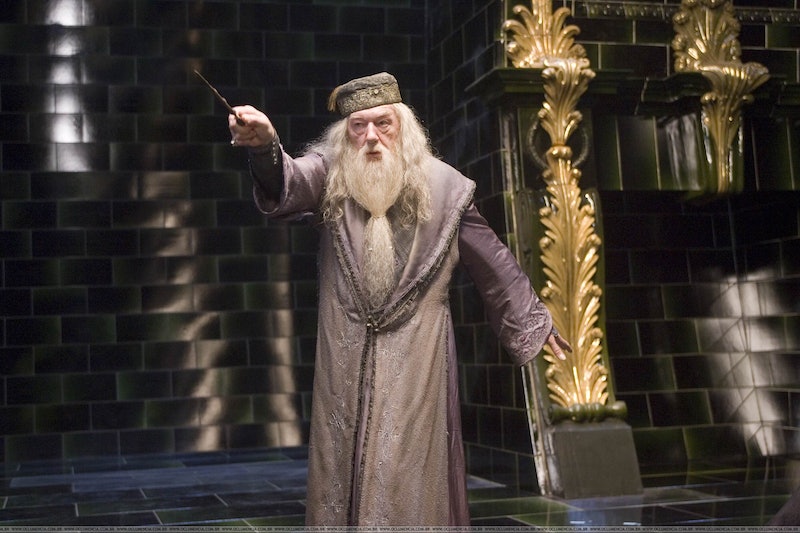 Recently in the dark abyss of Pottermore, habitual character murderer J.K. Rowling revealed that of all her Harry Potter fatalities, Florean Flortescue was the only one she regrets. To which I have to say, who? And though I couldn't wrap my head around it, it made me wonder, is any wizard's life really worth more than another? The answer, of course, is yes.

The truth is, guns don't kill people. J.K. Rowling kills people, and she's taken quite a few witches and wizards down over the course of the Harry Potter series. Some of those deaths, naturally, come with a fierce sense of justice, even celebration. Others come with ceaseless streams of tears and the hysterical chanting of "WHY, WHY, WHY, WHY, WHY?" into your copy of The Deathly Hallows. Either way, I took time out of my life to properly access these loses, from absolutely justified to completely unfair.

Mind you, these are the deaths that occur during the book, not prior to the events of the novel. It would've gotten tricky had it been the latter. And of course for those who are uninformed, spoilers lie ahead, such as SNAPE KILLS DUMBLEDORE ON PAGE 606. Enjoy.

I know this might be a tough argument, but for what it's worth, Voldemort had the allure of power on his side, which at least elevated him to be kind of cool as a villain . Peter Pettigrew, however is a spineless scumbag, a follower, a literal rat bastard. He ends up choking himself to death, and it's so justified.

I mean, it's wizard Hitler.

Spineless, sneaky, and hidden under a turban full of secrets, Quirrell, the plot-twist baddie from the first book, will not be missed. However, until he reveals his double life as a death eater, we develop sympathy for his skittish persona, thus landing him here.

Bellatrix could have maybe been a rung or so higher. She kills her own cousin, which is bad manners, to say the least. The truth is though, I enjoy crazy bitches, and she gets a pretty memorable death scene out of the deal (thx, Molly Weasley).

Poor Lavander. For most of the series she's simply a peripheral being, at some point in the films she magically changes races, and then she gets shamed for being Ron's perhaps overbearing girlfriend. I think her overall treatment is kind of unfair, but her death simply does not resonate.

I'll admit it, this was painful to watch in theaters, more-so because he dies a free elf and that, as a story arc, gives me feels. But as a character, Dobby is basically the Jar Jar Binks of this franchise. So.

She was just trying to be a hero! Sadface.

This sort of thing happens a lot with movie adaptations: I loathed Snape in the books, but love him in the movie. Maybe I just have a thing for Alan Rickman's voice. Who knows. While his death itself is both frighteningly violent and poignant, let's face it, Snape is a morally ambiguous character. His motives are entirely selfish, even when romanticized, and he's mean to Harry throughout the series because of some grunge from his days as a schoolboy . I don't know if killing him off was necessary per se, but it didn't feel wrong.

Eh. Tonks' death independently is kind of sad, but mostly she was a new mother, not because I have any strong feelings about her as a person. Tonks death in tangent with Lupin, however, is heartbreaking, and we will visit that shortly.

We don't really get close to Cedric, but his was the first "Oh, shit!" death in the series, and it really is an unfortunate one. Basically Cedric, who was just trying to win the Triwizard tournament, gets tangled up in Harry's shenanigans via port key, and after being dubbed merely a "spare" he gets unceremoniously offed. He's later reborn as Edward Cullen and had to do five crappy Twilight movies. That, my friends, seems like a fate worse than death.

Hmm. It's heartwrenching, yes, I can't get through Dumbledore's death scene without bawling my eyes out. The Hogwarts headmaster symbolized safety, wisdom, and comfort, and without him the establishment nearly crumbled. But at the same time, this was all part of his plan, and let's face it, he was already about 400 years old.

In the books, Tonks' and Lupin's deaths are regulated to like, a throwaway line. It's honestly something like, "And then Harry saw the bodies of Tonks and Lupin, blah blah blah." That's IT. And it's such a disservice to a character who was a great mentor to Harry, in ways, a far better mentor than Sirius. Moreover, as mentioned before, Tonks and Lupin are new parents, so their poor child gets blatantly Harry Pottered after the Battle of Hogwarts. Cruel.

Ah, yes. The fact that Harry turns out to be a horcrux, a sacrificial lamb in his own story, is absolutely a dick move on Rowling's part. And Dumbledore, naturally, maybe should've mentioned that earlier on. Even Harry's like, "So you've basically been prepping me to die for the past 17 years? WTF, mate?" While watching this realization occur tugs heavily on your heart — when Hermione starts losing I start losing it — it doesn't rank higher, however, because Harry pulls a Jesus Christ and gets resurrected within like, a chapter. So while it's absolutely unfair, it also barely counts as a death in the first place.

Oh my God. There's roughly 45 Weasley siblings, and I would've traded in many of them to have Fred back with George. Because that's the thing, the Weasley twins were a package deal, a duo that ceaselessly lightened the mood when things were their darkest. Yet in one book, Rowling decides to cut off George's ear and just off Fred for shits and gigs. I mean, seriously, if you were going to kill anyone, kill Percy. That guy was the worst.

Originally Arthur Weasley was supposed to be killed off in book five, and as my friend has been saying for years, PEOPLE WOULD'VE GOTTEN OVER THE DEATH OF ARTHUR WEASLEY. Sirius, equal parts cool and roguishly charming, managed to be one of the stand-out characters in the series, despite the fact that his appearances were ultimately pretty scarce. But the biggest cruelty of all is that to Harry, Sirius represented lost link to his past, and hope for the future. And my heart breaks every time I hear Sirius's promise: "When all this is over, we'll be a proper family." EXCEPT NO. CRYING FOREVER.