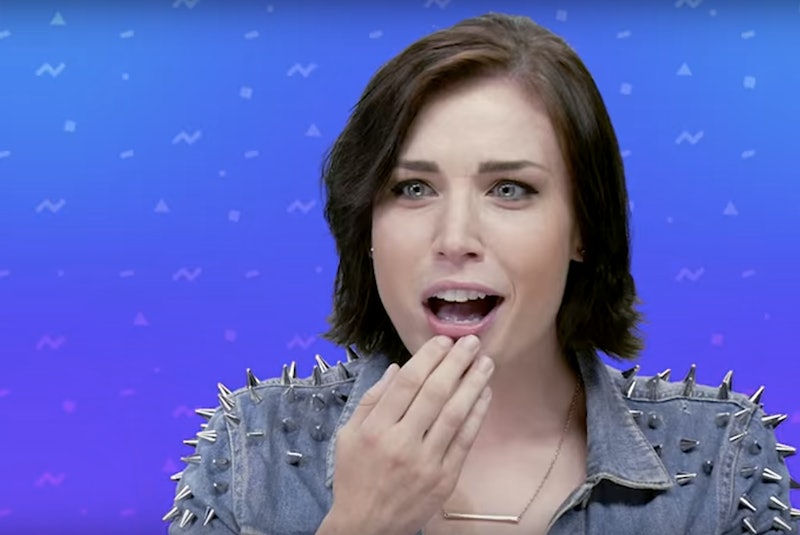 Proving that ignorance is bliss, Distractify sat down with a bunch of innocent '90s babies and told them what "The Macarena" is really about. I think it's safe to say that none of us will ever be OK again. Real talk, guys: I shook my painfully enthusiastic seven-year-old tushie to this song all up and down the pool deck at every swim meet I went to in the '90s, and never once did it occur to my Capri-Sun-addled brain that the lyrics might be less than G-rated. So this wasn't just a shock for the victims of this video. This was a shock felt 'round the world.

In case you, like me, also had a few shreds of your innocence left, please allow this video to cast them to the wind. It turns out when you listen to the actual lyrics of "The Macarena," it is very explicitly about a woman who is so bored with her boyfriend that she invites not one guy, but two guys to help her cheat on him — OH, and they're both his friends. "The Macarena" was basically Gossip Girl before it was a tickle in the author's brain.

But don't worry, fellow ignorant '90s flowers, for we are far from alone in our ignorance:

For your reference, here are the lyrics in Spanish:

And here they are, translated at their most literal level into English:

Macarena has a boyfriend who's called ... who's called the last name Vitorino, and while he was taking his oath as a conscript she was giving it to two friends ... Aaay!

MIC DROP. Macarena was officially having more fun than ANY of us were those summers. And before you start making excuses about how you never heard the English version, odds are you probably did. The Bayside Boys Mix version chart-topped for a long-ass time in 1997, with these lyrics:

Now don't you worry about my boyfriendThe boy whose name is VitorinoI don't want himcan't stand himHe was no good so I ... ha ha ha haNow come on, what was I supposed to doHe was out of town and his two friends were sooo fine

Wherever you are, Macarena, I want to thank you. No matter what your song was about, it let me live out an early childhood delusion of being an adept dancer, and no amount of innocence being shattered will take that away from me. In the meantime, I'll be commiserating with all of these people Distractify has scarred for life:

And because this is stuck in your head anyway, and you deserve it after a long hard week:

Want MORE '90s? Watch us try out our fave lip glosses from the '90s to see how they've held up over the years (and subscribe to Bustle's YouTube channel for more hilarious videos!):