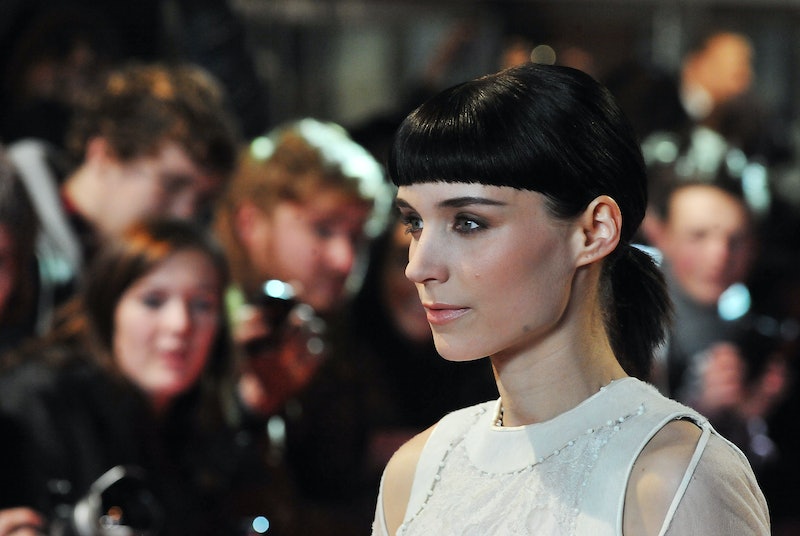 It's time to get excited, because the new Lisbeth Salander book is going to hit shelves on Tuesday. It's been five years since the third book in the Millennium Series, The Girl Who Kicked the Hornet's Nest, came out in America, and ever since then, readers have been clamoring for more stories starring the incredibly brilliant hacker Lisbeth Salander. Due to the tragic circumstances of Stieg Larsson's death from a heart attack in 2004, before the books were even published in Sweden, Larsson was never able to see how successful his trilogy would become. This is a shame — if only he had been able to see how beloved Lisbeth Salander is now.

Salander taught girls that victims don't always have to be weak, that sexuality can be free, and that no matter what, it truly doesn't matter what others think, so long as you be yourself. When The Girl in the Spider's Web comes out on Tuesday, it will be awesome to get those lessons again — and hopefully many more like them.

There stands a problem, though. How long has it been since you've read the original Millennium trilogy? Have you been preparing all this time by rereading them in between title reveals and cover unveilings? Or has it been five years since you last cracked the spine of one of Larsson's thrillers? If so, then don't worry. I've compiled all you need to know about the first three books, so that when Tuesday rolls around, you can just dive in! Each book in the series is incredibly dense and jam-packed with subplots, but I've boiled each down to what you need to remember, so you can dive right into The Girl in the Spider's Web.

What To Remember From The Girl With The Dragon Tattoo

Journalist Mikhail Blomkvist is in the middle of a professional crisis after being sued for libel by billionaire industrialist Hans-Erik Wennerström. Things look bleak until a titan of Swedish industry, Henrik Vanger, extends to Blomkvist an opportunity to resurrect his good name, offering him information that could destroy Wennerström once and for all. In exchange for saving his career, Blomkvist must spend a year researching the disappearance of Vanger's niece, Harriet, who has been missing for four decades.

In his quest to find Harriet, Blomkvist enlists the help of Lisbeth Salander, a tattooed, pierced, punked-out social misfit who happens to be a brilliant computer hacker. As Salander and Blomkvist's relationship grows deeper, it turns out that they might actually be investigating a serial killer obsessed with the idea of punishing women.

The book ends with the discovery that Harriet is still very much alive, and has living under an assumed name in Australia since killing her sexually abusive father in self defense. While Vanger's information ends up being useless, Salander hacks into Wennerström's computer and finds the evidence for Blomkvist to run an exposé (stealing 2.6 billion dollars from his bank account in the process). After everything, Salander goes to Blomkvist's apartment to tell him that she loves him, only to find him spending time with his co-worker and lover, Erika Berger, prompting Salander to leave.

What To Remember From The Girl Who Played With Fire

Since ditching Blomkvist, Lisbeth Salander has been touring the world for a year. Meanwhile, Blomkvist has been focusing on a new investigative piece about sex trafficking in Sweden — an operation run by a mysterious figure called "Zala." When two journalists working on the story turn up dead, Blomkvist is shocked to discover that Salander's fingerprints are on the gun, and works to prove her innocence.

More about Salander's backstory is also given. It turns out that Zala is actually her father, Alexander Zalachenko — whom Salander set on fire in his car many years before, due to his abusive behavior. After a showdown in a barn, in which Salander is shot in the head and buried alive by Zalachenko, she survives and attempts to kill him with an ax. The book ends with Blomkvist catching Zalachenko and Salander rushing to the hospital.

What To Remember From The Girl Who Kicked The Hornet's Nest

Picking up right where The Girl Who Played With Fire left off, Salander is being kept in the intensive care unit under heavy guard, knowing that the second she gets out of the hospital, she'll be brought to Stockholm to stand trial for three murders that she did not commit. This puts Blomkvist on the case, using all of his investigative powers to prove her innocence. Which puts him in a rough position once "The Section," a portion of the Swedish Security Police that focuses on counterintelligence, wants his investigations suppressed, due to the fact that it reveals a history of government neglect and corruption.

Secretly working from her hospital bed, Salander taps into and mobilizes the "Hacker Republic" that she belongs to, working to support Blomkvist's investigation and unearthing several key members of the corruption. The book ends with The Section's exposure, Salander's charges being dropped, and Salander and Blomkvist reconciling.

So here's the next question: Are you read to dive in again with Lisbeth?