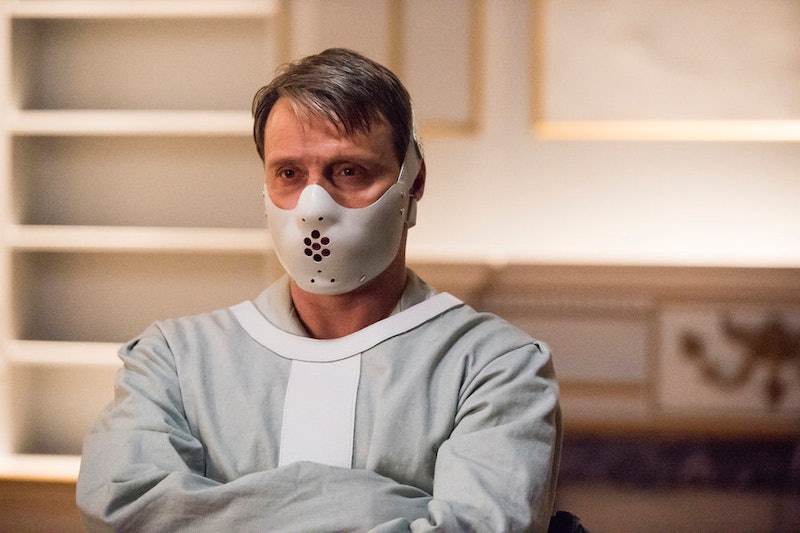 We all knew this day was coming, but that didn't make the Hannibal Season 3 (and series) finale any less difficult to digest. Throughout these past three years, we've come to witness some truly extraordinary (and downright horrifying) things from this dark NBC drama, many of which that are sure to give us nightmares for years to come. And while I'm personally nowhere close to ready to see this delectable show come to an end, there's no denying that Bryan Fuller made sure to pull out all of the stops for this final showdown. Not only did we see Will and Hannibal kill The Red Dragon together, but we also watched them fall off a cliff immediately afterward while sharing a tender embrace. But are we to assume that Will and Hannibal are really dead? Like many of Fuller's episodes, it's all left up to our interpretation.

If we take the scene at face value, then yes, the odds of their survival seem slim at best. I mean, these characters have recovered from numerous injuries throughout the years, but that fall looked pretty steep, especially considering that they were already sporting some serious wounds before the fall. Then again, how many times have we thought someone was dead on this show only to see them miraculously bounce back? And if anyone could pull such a thing off it would be these two.

Plus, considering how willing Fuller and the actors are to continue the Hannibal story at some point down the line, it's probably safe to say that at least one of them survives — most likely the one after which the show is named. True, the show has taken more than a few liberties in regards to Thomas Harris' novel, considering that Will's wife, Molly, was supposed to be one to bring the Red Dragon down. But I doubt Fuller would change the storyline so much as to kill off both Will and Hannibal in the end. Otherwise there wouldn't be much of a story left to tell.

And let's not forget the small — but very significant — post-credits scene that showed a very sedated-looking Bedelia seated at a dinner table that featured her own roasted leg as the main course. Who did this to her? Given the two other place settings at the table, she's clearly waiting for others to join her, and plans to use that concealed fork of hers as a weapon. Could these two mystery dinner companions be Hannibal and Will? Did they survive that fall and are making Bedelia receive her just "desserts"? Hannibal made it no secret at the beginning of the season how much he wanted to taste his pseudo-wife, so it seems entirely possible.

Either way, Hannibal has left us with much to chew on in the wake of this finale. Let's just hope that it'll eventually serve up some answers and deliver another appetizing course to this starving fan base. I miss it already. Now if you'll excuse me, I'm off to enjoy some fava beans and nice chianti. Ta-ta.