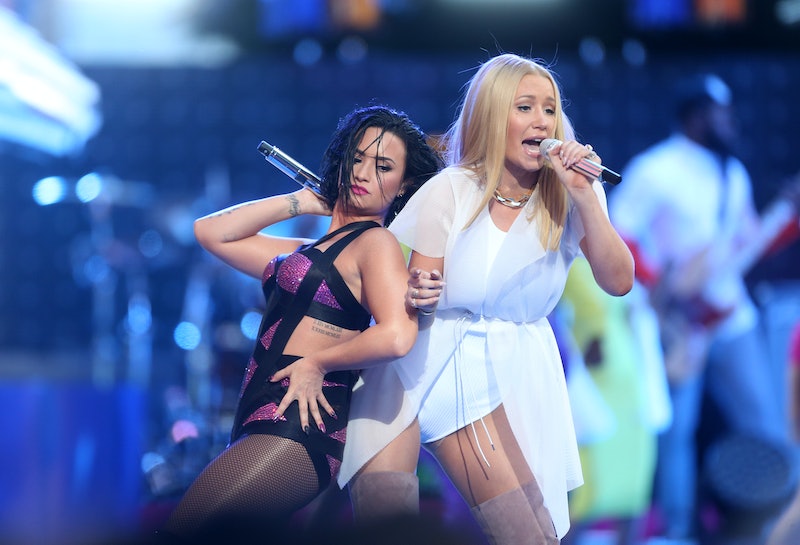 Demi Lovato is ending summer on a high note — by taking the stage at the 2015 MTV Video Music Awards on Sunday night. It's been a great summer for the singer, with her seasonably-appropriate hit single "Cool For The Summer" hitting the Billboard charts, and her confident appearance on the cover of this month's Cosmopolitan magazine. Now, at the 2015 VMAs, Demi Lovato performed "Cool For The Summer" — and she totally rocked her first VMA performance with a super fun beach theme.

Lovato's performance took place outside in Downtown Los Angeles by the Orpheum Theater. She began lounging underneath some umbrellas on stage, then revealed a very sassy sparkly black and purple corset. As if that wasn't enough, she then began dancing around the outdoor stage with some (very hot) male dancers in brightly colored speedos. She even literally popped a cherry piñata! (That VMA virginity? Gone.)

Then? Things got crazy. Midway through the song, Iggy Azalea popped in and rapped a few verses. Durign the finale, Lovato was carried along the crowd in an inflatable raft as beach balls were thrown in the air. What a way to say goodbye to summer!

It's no surprise that she totally killed it on stage. As a warm-up, Lovato appeared with Nick Jonas to rock a pre-VMA concert at the Hollywood nightclub Avalon on Saturday night, according to Billboard. She told the audience how proud she is of her new album Confident, which will drop in October and, she said, reflects her more musically than anything else she's done. "There’s songs on my album that are more soulful," Lovato told the crowd at Avalon, reported Billboard. "I feel like this is the first time I’ve been able to showcase my voice on an album."

And she's also definitely proud of "Cool for the Summer" being so, well, cool. Not only is it nominated for the Song of the Summer VMA, but she he listens to it all the time. "Every time I get in my car I hear it on the radio," Lovato told the crowd.

So, it's no surprise — seeing how passionate she is — that she totally rocked the VMAs with her performance. But then again, this is Demi Lovato we're talking about — has she ever not killed it onstage?

Check out Lovato's performance below:

More like this
Yes, That's Lindsay Lohan's Sister Singing In The 'Falling For Christmas' Movie
By Radhika Menon
Taylor Swift Fans Sue Ticketmaster For The Eras Tour “Ticket Sale Disaster”
By Jake Viswanath
Spotify Wrapped 2022: The Best Celebrity Reactions To Their Streaming Stats
By Radhika Menon
Britney Spears Celebrated Her Birthday With Loving Messages To Jamie Lynn & Her Sons
By Brad Witter
Get Even More From Bustle — Sign Up For The Newsletter