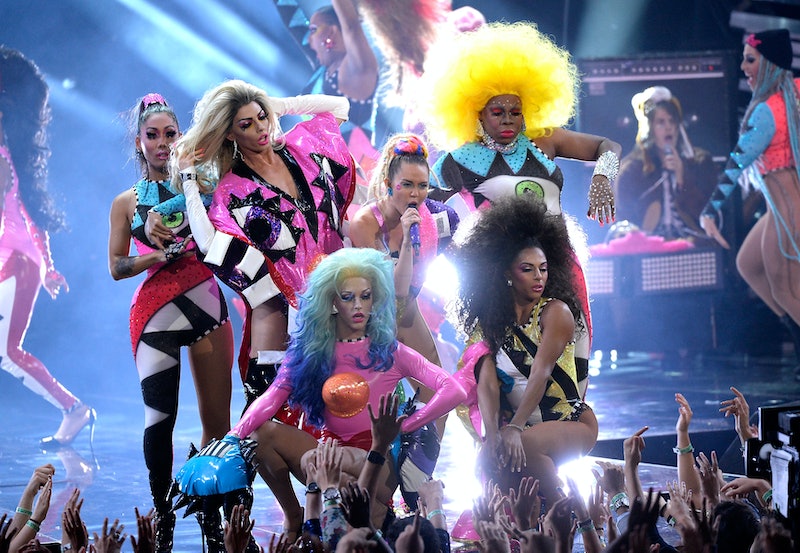 As if you could expect anything else, Miley Cyrus was super over-the-top during the MTV Video Music Awards. And, the antics only grew wilder at the end of the night when Cyrus performed "Dooo It," the first single off her new album Miley Cyrus & Her Dead Petz. (No, I'm not making this up.) Not to be outdone by her 2013 twerking duet with Robin Thicke, the singer took the stage for the final number and performed alongside 30 drag queens who, if I'm being honest stole the show with their epic dance moves and awesome clothes.

There's a reason these performers may have caught your eye, aside from their bright and bold costumes. You may have recognized several of them from their appearances on RuPaul's Drag Race. Earlier this week, rumors surfaced that Cyrus recruited 30 contestants from RuPaul's Drag Race to perform alongside her at the VMAs (and was even taking one of them as her date.) And, damn, did she pick a great group. From old favorites to reality star victors like Shangela, Pearl, Violet Chachki, Willam Belli, and more, here are the RuPaul's Drag Race contestants that graced and owned the stage at the 2015 VMAs.

Also known as the Debutantess of the Deep South, Wadley competed on Seasons 2 and 3 of RuPaul's Drag Race.

Carrera made her debut on Season 3 of RuPaul's Drag Race.

Always one with the one-liners, Edwards appeared on Season 5 of the series.

The drag daughter of Edwards, Estranja competed on the show's sixth season.

Vivacious competed alongside Estranja in Season 6.

Act appeared on the sixth season.

The world met Zamolodchikova during Season 7.

Standing front and center with Cyrus was Season 6 competitor Gunn.

Rumored to be Cyrus's date to the VMAs, Chachki competed on and won Season 7.

For the complete list of all 30 of the epic performers, visit MTV.com.