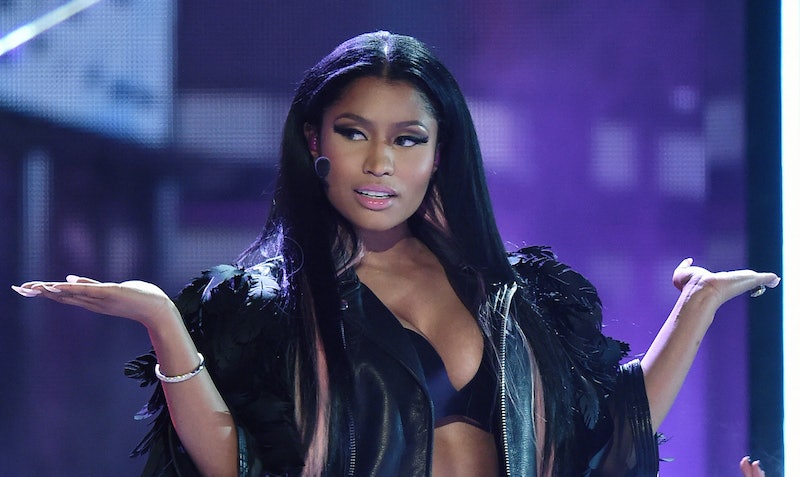 I can't believe I'm even saying this, but we need to take something that Miley Cyrus did a little more seriously. As I'm sure we've all noticed, Cyrus has been feuding with Nicki Minaj, establishing herself as yet another person who doesn't understand the very real points Minaj was trying to make with her tweets pointing out the racial bias inherent in the music industry. Of course, Cyrus has as much right to her opinion as anybody else, but there are some really problematic elements to her argument that I don't think that she's even aware of. In fact, this "feud" isn't just about two musicians disagreeing with one another on an issue, or throwing shade at one another. It's so much bigger than that.

Just in case you aren't completely caught up, this all started when the VMA nominations were revealed on Jul. 21, and Minaj's "Anaconda" did not receive a nod in the Video of the Year category, nor did her collaboration with Beyonce, "Feelin' Myself," get any acknowledgement. Instead, Taylor Swift was primed for what seemed like a sure win in that category (and it was!), for her supermodel-filled "Bad Blood" video. Immediately following the nominations, Minaj made her disappointment heard on Twitter, posting, "If your video celebrates women with very slim bodies, you will be nominated for vid of the year." And then, of course, it was on.

Swift felt attacked by Minaj's tweet, so she fired back, scolding Minaj for "pitting women against each other," and just generally missing the fact that Minaj's response wasn't about Swift. It was about the general racial climate that artists of color come up against every day, as Minaj powerfully explained, "If I was a different 'kind' of artist, 'Anaconda' would be nominated for best choreo and vid of the year as well. When the 'other' girls drop a video that breaks records and impacts culture they get that nomination... I'm not always confident. Just tired. Black women influence pop culture so much but are rarely rewarded for it."

Swift ultimately came around to, if not quite that realization, then at least the understanding that Minaj wasn't targeting her specifically, and that she was in over her head when it came to contributing to the discussion of this issue.

But no sooner had their disagreement cooled then along came Cyrus to insert herself into the conversation, loudly trumpeting her lack of self-awareness. Cyrus called out Minaj for mishandling the topic during an interview with The New York Times:

If you do things with an open heart and you come at things with love, you would be heard and I would respect your statement. But I don’t respect your statement because of the anger that came with it. [...] If you want to make it about race, there’s a way you could do that. But don’t make it just about yourself. Say: “This is the reason why I think it’s important to be nominated. There’s girls everywhere with this body type."

First of all, Cyrus is saying she doesn't respect Minaj's argument because of the way it was presented, which is ridiculous. Simply by virtue of being a white female, Cyrus has zero experience of what Minaj is describing, and her casual comment makes it seem like she didn't even try to understand Minaj's point of view. Second of all, there's the fact that Cyrus instructing a person of color on how best to present her own argument; I mean, she straight up told Minaj to be more polite, which is about as socially unaware as it gets.

What I read sounded very Nicki Minaj, which, if you know Nicki Minaj is not too kind. It’s not very polite. I think there’s a way you speak to people with openness and love.

Cyrus has been a vocal proponent of body-positivity, refusing to let herself be dismissed on the basis of her sexuality. However, sadly, she seems unable to make the leap from that argument to a very similar one regarding race. And it's for an embarrassingly simple reason: this discussion doesn't affect her. Cyrus doesn't need to be concerned about the issues that Minaj is bringing up — as a white performer, she has benefited from the industry's bias toward her to the extent that she is not even aware of it. It just feels normal to her. She is able to make the choice not to engage in a productive conversation about race because she doesn't have to; it doesn't affect her. Is it any wonder, then, that Minaj lashed out at Cyrus the way she did at the VMAs?

Ultimately, what it comes down to is that Nicki Minaj needs to fight to even be recognized in the industry that she's in the process of revolutionizing, all because she is a woman of color. The institutionalized racism is not Cyrus' fault, by any means — nor is it Swift's fault — but it is the responsibility of both stars to speak about it intelligently and responsibly if they choose to add their voices to the conversation at all.

When Cyrus and Swift didn't take the time and care to listen to what Minaj had to say, or to do their research into the point being made, then the end result was that people got caught up in the scandalous "feud" between Minaj and other pop stars and forgot to pay attention to the pervasive issue of racism in the music industry Minaj is trying to bring to light. And that distraction is just another way of ignoring the valid concerns and raised voices of performers of color like Minaj.

More like this
Adele’s All-Female Lineup Includes Kacey Musgraves, Mahalia, & Self Esteem
By Shahed Ezaydi
Olivia Rodrigo’s Song Dedication To 5 SCOTUS Justices Sent A Strong Message
By Grace Wehniainen
Everything To Know About J-Hope From BTS’ Solo Album ‘Jack In The Box’
By Stephanie Topacio Long
Will Beyoncé Be At The BET Awards To Perform “Break My Soul” Or Attend The Show?
By Jake Viswanath
Get Even More From Bustle — Sign Up For The Newsletter