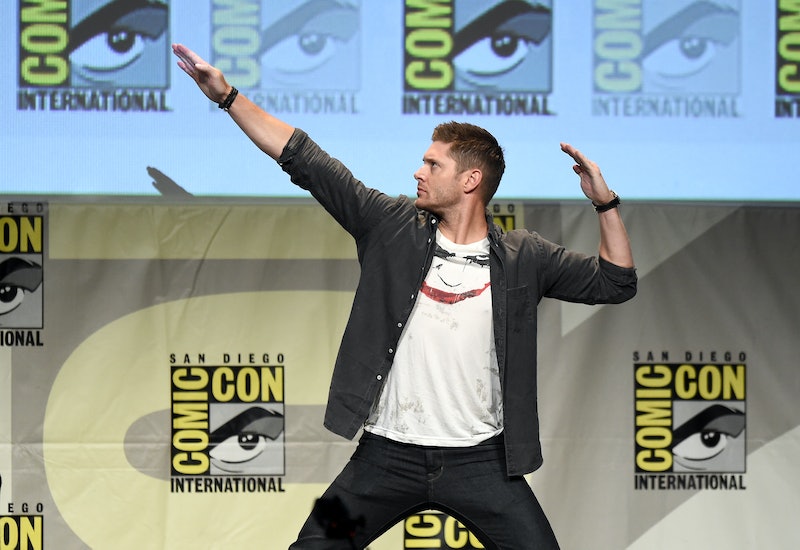 It's official: Dean Winchester can do it all. OK, not really Dean Winchester (but, yes, he also can do it all), but the actr who plays him, Jensen Ackles, is a master at pretty much everything thrown his way. When he isn't playing a beloved hunter and brother to Sam Winchester on The CW's Supernatural, Jensen Ackles sings at fan conventions. That's right, he performs and showcases that beautiful voice of his all the time. I think you and I are thinking the same thing: Ackles needs to form a band with the rest of the Supernatural cast, right?

Whether he's recording his own music or channeling Dean's favorite genre (classic rock, duh) at conventions, the 37-year-old makes his fans fall in love with him all over again when they get to hear those pipes. I mean, it shouldn't really come as a shock, especially based on all those times Dean's done karaoke or sang in the car alongside Sam. But every time Ackles performs fans still get chills, because he's just that amazing. I can't blame them, because the same thing happens to me, too. Now if only I could see him sing live... I guess I'll just have to settle for watching videos on YouTube.

So, with that said, here are nine times Ackles channeled his inner rockstar and made fans want a Supernatural band, ASAP.

1. When He Released This Song

2. When He "Sang" Taylor Swift

3. When He Sang "Sister Christian"

4. When He Sang With The Supernatural Cast

Does it get better than Ackles, Mark Sheppard (Crowley), Richard Speight Jr. (Gabriel/The Trickster), and Rob Benedict (Chuck) performing "Simple Man?" No, but it would've been a little bit more enjoyable if Jared Padalecki was there. Oh well, I'll take what I can get.

5. When He Dedicated A Song To JarPad

6. When He Sang "Carry On Wayward Son"

This one will hit home for all Supernatural fans.

7. When He Finally Performed With JarPad

YES! And one of my favorite songs, too!

8. When He Sang Karaoke

Technically, this is Deanmon, but who cares.

So... Jensen, when can we expect that Supernatural tour?