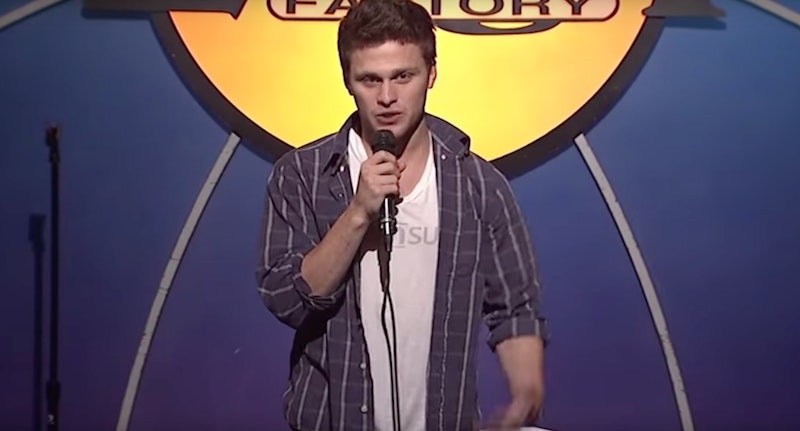 As bummed as I am about the end of summer, there are good things about fall: Pumpkin spice lattes, flannel shirts and leggings, and the return of TV shows after the summer hiatus. This October, Saturday Night Live will be returning with a premiere that features Miley Cyrus as the first host of the season, which should definitely be interesting after seeing her host the 2015 MTV VMAs on Sunday night. And when the show comes back, there will be a few new regular players, too. This week, NBC announced that SNL is adding comedian Jon Rudnitsky to the cast. And if you've never seen Rudnitsky's comedic skills in action, don't worry — he might only be 25, but he's more than ready for his newest challenge.

Rudnitsky's probably best known for his YouTube channel, which features parodies he's done of popular TV shows and movies, like the one he did for House of Cards. Besides that, he's also accomplished in standup, and now that his channel has received millions of views, it's obvious that he's prepared for SNL. If you want to work in entertainment, YouTube is the best way to get discovered and to build a fan base while also showcasing your talent, and Rudnitsky has definitely used it to his advantage.

Need proof that Rudnitsky's going to be so much fun to watch on SNL? Look no further.

His True Detective: The Oscars Parody

Rudnitsky makes a funny (and very accurate) Matthew McConaughey, and to me, this really proves that Rudnitsky is going to be awesome at SNL sketches, especially when he's tapped to play a celeb. I'm keeping my fingers crossed that he brings this impression back for a skit in the future, because I need to relive it but on TV this time. Even if you don't watch True Detective, you'll probably get a kick out of this one.

Rudnitsky's standup was so solid at the Laugh Bowl (a college comedy competition) that he actually ended up winning the whole thing in 2012. Pretty impressive, right?

I love this video based solely on the fact that Rudnitsky makes an excellent Effie Trinket, down to the last detail.

His Standup About Social Media

It's so true, and that's why it's funny. Maybe he's right about how Twitter has given all of us the right to feel like an audience actually cares about what we're doing minute by minute, but I'm going to continue to live blissfully unaware of the fact that my followers don't care and continue to tweet my life away as usual.