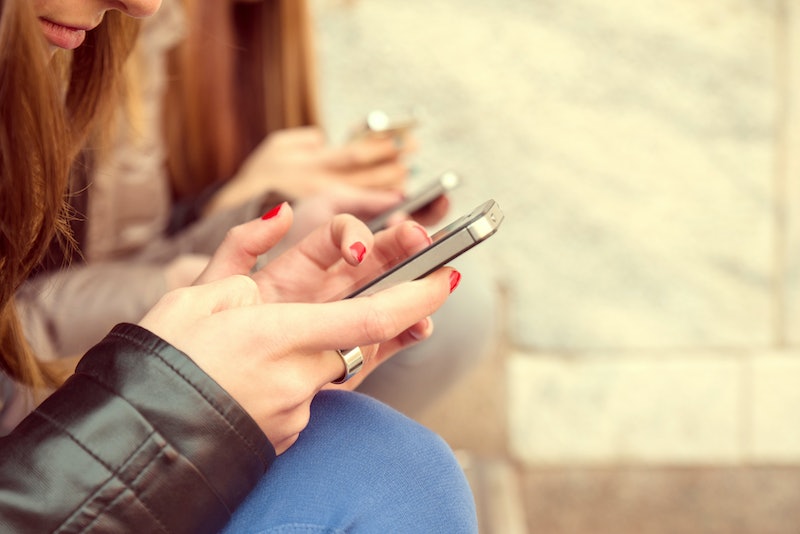 If you haven't read the Vanity Fair article on the "dating apocalypse" that Tinder has supposedly ushered in, you've at least heard people debate writer Nancy Jo Sales's claim that Tinder has ruined dating. Incorporating interviews with several 20-somethings in New York's financial district, at the University of Delaware, and at several other locations around the U.S., the article depicts Tinder and similar apps like Hinge as daggers in the very practice of dating. “And it’s just like, waking up in beds, I don’t even remember getting there," one 29-year-old man was quoted. “I’m on it nonstop, like nonstop, like 20 hours a day,” said one college woman.

I couldn't help but laugh as I read these hyperbolic stories. While I don't doubt that they're true to the experiences of those quoted (though I wouldn't be surprised if some of the guys exaggerated a bit), they're a far cry from my own experience with Tinder. In fact, I have never in my life had a Tinder hookup — only dates. And while the swiping usually is based primarily on looks, I view each user's photos as merely an initial filter before I get to know someone's personality. Was I crazy? Or are articles like Vanity Fair's depicting dating apps unfairly?

I turned to other American 20-somethings to see which experience of Tinder — mine or that of Sales's interview subjects — was most common. Based on their responses, it looks like it's about 50/50. Here's how millennials are using Tinder according to my own interviews:

1. Pursuing More Than A "One-Time Thing"

"The person I'm hanging out with at present from Tinder uses a few different dating apps, has met up with about 12 women from online dating sites over the past year or two, and met his last girlfriend on Tinder. Our relationship doesn't fulfill the Tinder stereotypes in that he has actually been very persistent in trying to see me as much as possible and has expressly told me he's not interested in one-time things."-Samantha*, 23

"I'm only looking to use Tinder for its intended purpose, which is sex. And I'm constantly shocked by how many girls are shocked that guys aren't on Tinder to date. Dating is for other apps — although I do appreciate when the girl says in her profile that she's just there for dating and no hookups. Honesty is best."-Jason*, 27

"I'm new to it but so far have been going on dates, although a hookup wouldn't be out of the question! Also, my very close friend met her boyfriend of nearly two years who she now lives with on there, so there are definitely some people on there for serious stuff."-Lea, 28

"I used Tinder to find dates. Nothing much ever came from it, but I met some really interesting people and always had a positive date experience (even if I didn't end up making a romantic connection or going on a second date after that). I did meet two guys on there whom I dated for about a month each, but then I had to end things with them because I got back together with my ex-boyfriend (whom I met at work). I was definitely not looking for meaningless sex on there, and I didn't get the vibe that anyone I went out with was either. Though I did get a couple of "yo come f*ck me" messages here and there, I would hardly say they were the rule — they were the exception."-Jess, 24

"I used it for low-pressure, low-effort, casual dating — not casual sex. I never felt like I needed to specify I wasn't just looking to hook up either. You simply don't answer messages from guys that are like "wanna hook up?". I went on about five dates and I never felt like the guys were just trying to hook up. Only one of them made a move! Of course, I got some weird messages here and there, but nothing horrific that I couldn't laugh over with friends" - Michelle, 28

"I used it for about a month, scrolling through the men and women. I just couldn't relate to anybody just by looking at their picture, so I swiped left on almost everybody. When I did get a match, all the messages were really impersonal, so I preferred not to respond. I was only messaged by men. After a month, I realized that I needed more of a personal connection and so I left."-Sara*, 26

"When I was on it, I was trying to use it for dates, but I found it insanely hard to try and get to know someone. Either guys would message you with the classic sex request, or those who I actually talked to would get bored and eventually just drop the conversation. Maybe I wasn't using it right, but I don't really think there is a right way to use Tinder."-Kristin, 22

"I've actually had pretty good luck on it. I dated a guy I met on Tinder for nearly a year (it didn't work out, but not because of how we met), and I recently started dating someone else from it. I think the key is to meet up relatively soon after connecting on Tinder so you can build a connection in person, rather than constant messaging."-Abigail, 24

"I had a really fantastic experience with Tinder. In my opinion, it's a very simple, elegant, and straightforward resource that isn't harmful to the dating scene but rather should be embraced. You swipe based on your attractions, and conversation can determine the rest. I started using it in the winter, and I must have sorted through thousands of guys. The date that I considered the most casual (as in, the guy was visiting from the other side of the country) wound up being a super fantastic match. We've been together for about five months now and I couldn't be happier."-Andrew, 22

So, Basically, A Bit Of Everything

It looks like Tinder serves a variety of purposes depending on what you want and how you use it. Andrew, the 22-year-old quoted above who met his boyfriend on Tinder, advised those swiping for lasting love to "know what you're looking for, don't be afraid to be a little picky, and have zero expectations." He also mentioned that "selfies were almost always a disqualifier" for him, which sounds like it also could have helped weed out the sleazebags.

My personal advice would be that if you're looking for something substantive, put something substantive on your profile. Even Jason*, who believes Tinder is purely for sex, wasn't surprised that it gets me more dates than hookups given that my profile describes my intellectual passions. People with blank profiles, on the other hand, may be communicating that their photos are the only things to consider.

So next time someone scolds you for going on Tinder to find more than a hookup, you can say you know of several people who have found much more. And next time you hear a baby boomer rant about those millennials and their apocalyptic dating rituals, you can show them this article.