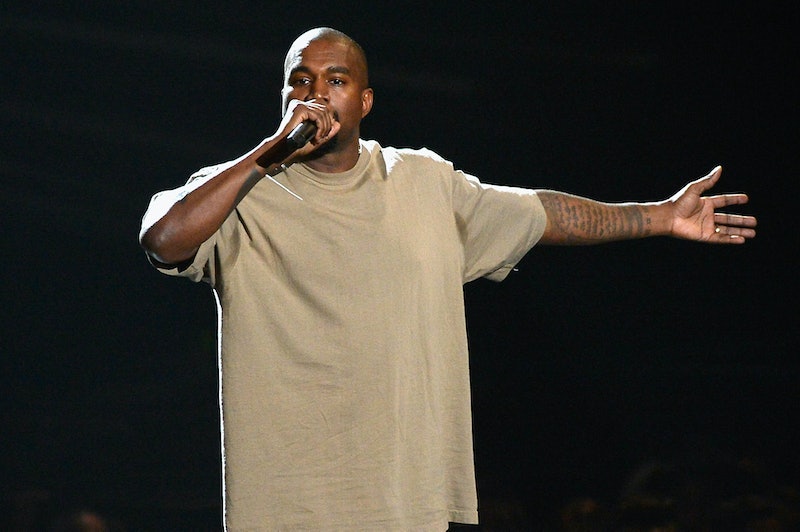 Things just got real, guys. During Sunday's MTV Video Music Awards, rapper/songwriter/producer, Kanye West declared the he had decided to run for President in 2020. Whether he'll actually make good on that promise is anyone's guess, but for now, there's nothing wrong with a little speculative projection. So what would a Kanye presidential campaign look like? All it takes is a quick glimpse at several years' worth of Kanye quotes to realize he's actually Donald Trump's left-wing twin.

After a long-winded acceptance speech for his Video Vanguard lifetime achievement award on Sunday night, West added, "As you probably could have guessed by this moment, I have decided in 2020 to run for president."

Immediately, social media blew up. Wired reported on Monday that Twitter alone was saturated with some 247,525 tweets citing the announcement within just one minute after West's statements. Amidst all the chaotic fervor, West stood on the stage of the Los Angeles Microsoft Theater and, in his best Trump impersonation, declared:

If my grandfather was here right now he would not let me back down. ... It ain't about me. It's about ideas bro, new ideas. People with ideas. People who believe in truth.

Sound familiar? It's probably because Trump had very similar revolutionary words in his campaign kickoff speech back in June.

Need more proof that West is just Trump in different partisan clothes? Just take a look at the following quotes to see what I mean.

In his acceptance speech on Sunday, West stated:

I will die for the art, for what I believe in. The art ain't always gonna be polite.

Similarly, during this month's first GOP primary debate, Trump dismissed critics who had accused him of being insensitive, sexist, and racist, remarking:

I think the big problem this country has is being politically correct. I've been challenged by so many people and I don't, frankly, have time for total political correctness. And to be honest with you, this country doesn't have time, either.

In a December 2013 interview with radio DJ Zane Lowe, West brashly framed himself as some sort of pop-culture god, saying:

When someone comes up and says something like, "I am a god," everybody says "Who does he think he is?" I just told you who I thought I was. A god. I just told you. That's who I think I am.

In his opening campaign speech, Trump didn't shy from the spotlight either, boldly stating:

On Their Influential Power

In an interview with The New York Times to promote his album Yeezus, West insisted that he would be the lone voice to change society for the better, stating:

I am so credible and so influential and so relevant that I will change things.

In near copycat language, Trump spoke at a Nashville, Tennessee gathering over the weekend and declared:

This is a movement. ... [People support me because] people in this country are smart.

According to West, the AIDS virus is a government conspiracy. (This might not bode so well if he actually stays true to his word and runs for office in 2020.) West told Rolling Stone in 2006:

My parents taught me that AIDS was a man-made disease designed to get rid of the undesirable people.

Trump didn't exactly go that far, but there's no denying that he sounded equally as crazy when he tweeted in 2012:

An "extremely credible source" has called my office and told me that @BarackObama's birth certificate is a fraud.

On Their Own Work

No, Yeezy wasn't joking about having a photo of himself on his wall as a young man when he quipped to Rolling Stone in 2004:

I put me on the wall because I was the only person that had me on the wall at that time. And now that a lot of people have me on their wall, I don't really need to do that anymore.

Likewise, Trump wasn't joking when, holding up a copy of his book, The Art of the Deal, he told a 30,000-strong crowd at a rally in Mobile, Alabama last week:

It's my second favorite book of all time. Do you know what my first is? The Bible.