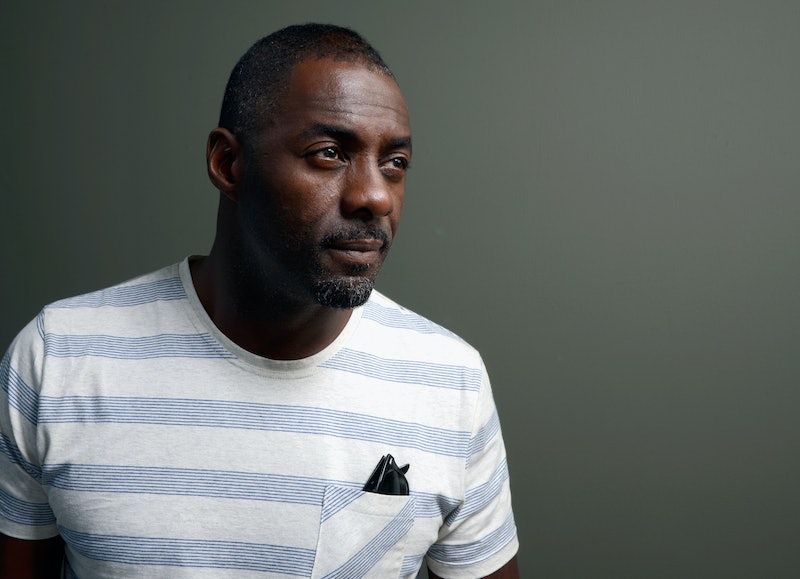 It feels like literally years now that I've been crying, begging, and screaming at Hollywood to please make Idris Elba the next James Bond. Not only does the British actor really want the part, but the franchise is used to cycling through Bond actors every few movies to keep the franchise fresh and the secret agent in a constant youthful state. Heck, even former Bond Pierce Brosnan thinks that Elba has what it takes to play the role with style and panache, so what's the problem here? Surely it's not an unwillingness to diversify? Well, in an interview with The Daily Mail, Anthony Horowitz, author of James Bond novel Trigger Mortis, added his two cents to the debate. According to the James Bond author, Elba is "too street" for the role, and there are other black actors who could do it better.

(UPDATE: Anthony Horowitz released a statement on Twitter on Tuesday in which he apologized for his choice of wording: "I’m really sorry my comments about Idris Elba have caused offence. That wasn’t my intention. I was asked in my interview if Idris Elba would make a good James Bond. In the article I expressed the opinion that to my mind Adrian Lester would be a better choice but I’m a writer not a casting director so what do I know? Clumsily, I chose the word ‘street’ as Elba’s gritty portrayal of DCI John Luther was in my mind but I admit it was a poor choice of word. I am mortified to have caused offence.")

Of course, Horowitz is no Ian Fleming, the man who created the character and wrote several novels taking place in that universe prior to his death in 1964. However, as the latest author to begin adding novels to the James Bond franchise, it makes sense that someone would want Horowitz's opinion on the ongoing campaign to get Elba elected as Bond. (Ah, the Internet, where the actor playing James Bond is treated with the same amount of gravitas and passion as who will be the next President of the United States.) According to him, "Idris Elba is a terrific actor, but I can think of other black actors who would do it better [like Adrian Lester, of Hustle]. For me, Idris Elba is a bit too rough to play the part. It’s not a colour issue. I think he is probably a bit too 'street' for Bond. Is it a question of being suave? Yeah."

Horowitz has nothing to do with the Bond film franchise, and that's something of a relief to me considering his opinion on Elba. Because the fact of the matter is that I have no idea what "too street" is supposed to mean in terms of Elba. Is it a commentary on the fact that Elba tends to portray rough and tumble characters, or stark antiheroes, such as Stringer Bell from The Wire or John Luther from Luther? Because, if so, I would like to take the opportunity to direct everyone's attention to his turn as Stacker Pentecost in Pacific Rim or Nelson Mandela in Mandela: Long Walk to Freedom for examples of how suave and majestic he can be on the right side of the law. Is it a commentary on the fact that he's been sporting a well-kept beard for the past few years in contrast to Daniel Craig's clean-shaven look in the films? Because, if so, he can shave that. Is it something undefinable in the way that Elba carries himself in daily life? Because, if so, I don't see it.

I know that passion and desire for the role don't necessarily translate to an actor doing a great job with it, but I'm just finding it hard to see "too street" as a dismissive phrase for why Idris Elba, the man who cuts such a beautiful figure in a suit and can radiate power and control with nothing but his eyes, wouldn't make an amazing Bond. Sure, there are other actors of color who could play the role just as well, but Elba would "absolutely" play Bond if only someone offered him the role. So, can we offer it to him and watch him transform himself into the suave, smooth, intelligent, capable 007 before we cast aspersions on his ability to perform the role well? He's an actor. Transforming himself is kind of his job.

But, hey, don't take it from me. It seems the whole of the Internet isn't taking too kindly to the idea of Elba being "too street" to do anything, let alone play a Bond that could go down in history as being one of the best. And, to be honest, this kind of outrage warms my heart. As long as the Internet is ready and willing to defeat any arguments against Elba being Bond that don't solely have to do with his acting talent, any arguments that would prevent him from being called in to at least do a screen test for the part, then we might actually have a shot of seeing this dream come true.