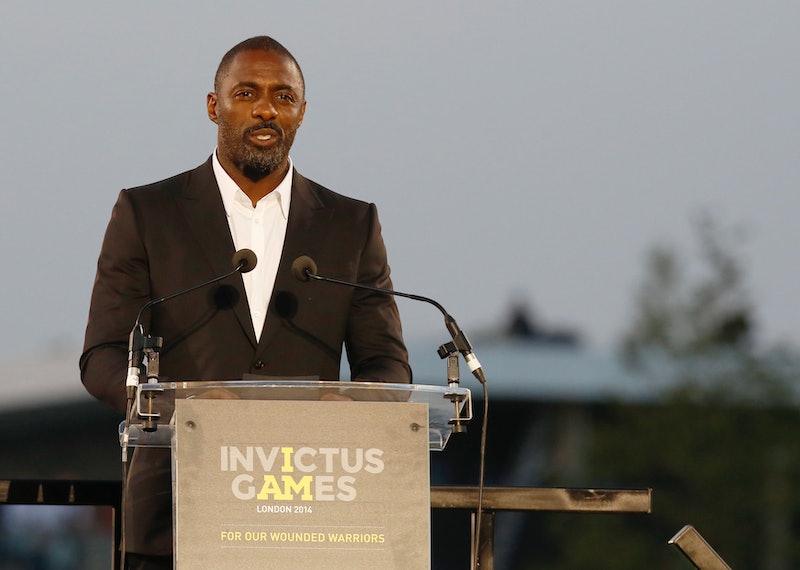 You know those things you didn't know you wanted until someone brings it up and then it's all that you can think of? If you don't, I am about to illustrate that point very well. According to a Reddit Idris Elba participated in on Saturday, Elba would play James Bond if someone asked him to. I repeat: We could have a James Bond played by Elba one day. If you're like me, this wasn't an idea that ever crossed your mind until Elba said it. Now it's literally all I can think about. Elba is currently starring in No Good Deed at the box office, but could we be mere years and a lot of filming away from seeing a James Bond movie with Elba as the star after Daniel Craig? More importantly, who do I have to write to in order to make this happen?

Whether you know Elba from his role as the title character in the BBC series Luther or you know Elba from his timeless role as part time father and full time badass Stacker Pentecost in Pacific Rim, you can't deny that Elba is an amazing actor who could totally do the James Bond thing well. Anyone who disagrees needs to watch him in anything again, because Elba is capable of giving such different nuance to each role he plays that you almost can't believe it's the same man playing all his various roles. However, that's not even the most important reason I need to see Elba play James Bond like yesterday.

1. We need a diverse James Bond.

This, to me, is the most important thing about the possibility of having Elba as James Bond. It's yet another chance for Hollywood to fix their notorious diversity problem. Sure, I can already anticipate the cries of, "James Bond is a classic character! We know he's not black!" However, why should we be able to adapt the James Bond mythos into all kinds of settings, age him up or age him down, but constantly leave his skin color exactly the same? Elementary broke new ground by making John Watson both female and a woman of color, so why not do the same with the James Bond character? We are beyond ready for that.

2. He's already passionate about it.

Elba didn't just say yes to playing James Bond, he said, "yes, absolutely." He might not have sounded optimistic about the idea that anyone would offer it to him, but the fact that he's already expressing interest is so positive. You can tell that Elba would put every effort into researching the character and trying to keep everything that people love about James Bond while still adding his own memorable touches to the mythos. The best you can hope for out of any actor is for them to take a role seriously and commit to doing their best job, which Elba has already proven he would do.

3. He knows all about complicated relationships with evil women.

No, that's not a dig at his girlfriend Naiyana Garth. On Luther, all the sexual tension was being brought to our screen by Elba and Ruth Wilson as the sociopath Alice Morgan. James Bond spends most if not all of his movies in some kind of sexy, seductive, love-hate entanglement with a woman who is somehow wrapped up with the bad guys (see Bond girls) and Elba already has plenty of experience from Luther pulling that kind of relationship off. So not only can he get the character down pat, but he can also bring his A game to the love scenes. Why aren't we making this happen yet, Hollywood?