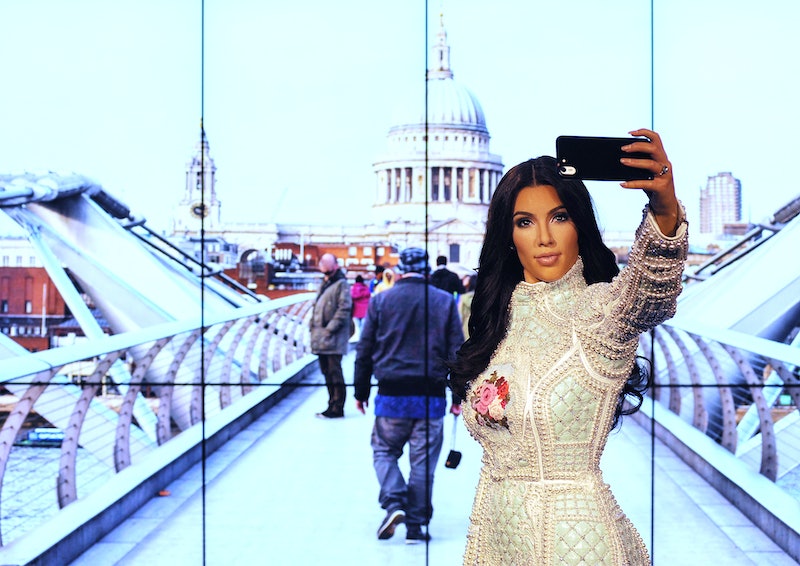 This cover set up is indicative of the world we live in, where celebs maintain control of their image in the media and with fans based on what they post to social media. They become both the beauty and the eye of the beholder by acting as subject and photographer. All the selfies were taken specifically for the cover.

The other cover alternates include Jennifer Lopez, Victoria Beckham, Madonna, and Mert Alas.

Notice that the generation gap is closed with these covers, as supreme diva Madge, who hit her apex of fame in the '80s and '90s, shares the nod with younger glamazons like J. Lo and Posh and millennials like Gomez and Cyrus.

Kim K? Well, she's in a class all her own as a social media marketer and selfie poster!

Besides these striking covers, which find The Material Girl in braids and Gomez gritting her teeth, Interview invited 150 folks across the fashion, entertainment, and music spectrums to wield creative freedom and share selfies for the #ME Issue.

Based strictly on the visual and the idea of the raw power of a selfie, here's my ranking of the covers.

The gorgeous singer, actress, and Justin Bieber ex is always so poised and polished on her Insta feed and in public. To see her let go, let loose, and look angry, posing with gritted teeth, is as raw and natural as it gets. This Sel-fie doesn't feel posed at all and therefore it's my favorite.

Beckham is known for her smile-free red carpet pose and her semi-scowl, which I love her for. But this snap feels like it was captured on a Beckham family vacay, with Posh's daughter, hubby, and son in the background. Notice both of the men in her life are buried in their phones, too! That said, it's the most playful (and makeup-free) I've seen the designer be in quite some time. It gives off such a genuine and familial vibe.

The fashion photographer didn't care about his scruffy five o'clock shadow and was Facetiming with Miley while in bed... at least in the layout. That was a modern touch that made this feel like I caught these two being all Insta intimate.

Ah, the aerial shot! It's a staple Insta selfie pose. But I love Madge in braids and wearing a rosary around her neck. She remains relevant because she keeps up with the kids and their method of communication (instead of keeping up with the Kardashians).

I admit that I am still miffed at Malik for bailing on One Direction earlier this year. He had the best voice of the bunch and he is missed. But I cannot deny this smoldering and pouty bed selfie or its ability to raise my blood pressure!

This cover shot looks like most of the photos on her busy Insta feed. I guess maybe the irony here is that Interview wanted the subjects to be themselves and I wanted the wild child that is Cyrus to do something other than what I expected her to do. But she went and posed like she always does, which was in keeping with the assignment. I'm mixed about this cover.

J. Lo took the whole selfie thing a bit literally. The camera is in the shot and everything! The multi-hyphenate does show off a bit of her famous booty and her curves. She is striking as always. But this wasn't my favorite Interview selfie because it lacks spontaneity; it feels like maybe she took 20 different shots in this pose before picking the one she liked best.

There is nothing wrong with Kardashian's selfie. It's a sexy, beautiful, and sultry pose of the reality star. I love that it seems fuzzy and filter-free. There's more Facetiming. But it's nothing we haven't seen before, either.

Editor-in-Chief Kevin Pollock explained the rationale for the eight selfie covers, saying, "We invited each subject to use this opportunity to create something powerful and personal: the utmost expression of themselves."

The resulting submissions were varied, from professionally shot images to raw, unedited pics. Each image has its own self-penned caption. So, really, it is like Instagram covering Interview, since most celebs are raw, fearless, and expository.

Pollock stated that the publication encouraged the subjects "to push the limits" but that the staff was not "interested in steering them in any way. Our aim was to allow them to create an image that reflects the way the subjects see themselves. And the way they want to be seen."