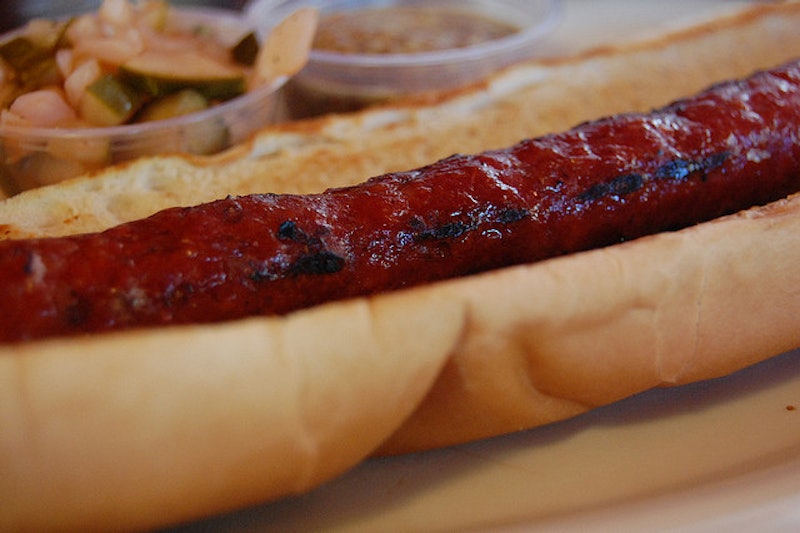 If you just went by the way most of us talk about getting older, you'd think that nothing happens to men's genitals as they age. Menopause and the bodily changes it brings tend to grab all the big headlines, so you could be forgiven for believing that the march of time does nothing at all to the male reproductive system. But you'd be so very, very wrong. Age-related change is inevitable for everyone — and that includes penises.

To begin with, women aren't the only ones who experience hormonal changes as they move on down the road of life. Beginning in their 40s, men go through a process called andropause, which is different but comparable to what women experience in menopause. While it doesn't involve anything as dramatic as the hormonal shifts that women undergo, the testosterone levels of andropausal men drop roughly one percent every year. Though the andropause-related hormonal drop doesn't make a man infertile (unlike menopause), over time the dips in hormones levels add up — leading to many of the changes to the penis, testicle, and sex drive that men encounter around the time they're able to use their senior discount at IHOP.

So what happens to a dude's hot dog and side dishes as he ages? Let's all find out down below.

As penises (and the people that they are attached to) get older, they undergo the same health and aging-related changes that impact the rest of the body. Atherosclerosis (more commonly known as clogged arteries) is a common problem among aging folks, and a very serious one at that — but it does more to the body than just impact the heart's ability to function. It can also change the color of the penis, making it a shade lighter, due to decreased blood flow.

Of course, clogged arteries are not a given as everyone ages — but even a penis attached to a person with squeaky-clean arteries might begin to have an uneven "mottled" color as it ages.

The one age-related penile change that we're all familiar with, of course, is erectile dysfunction. Introduced to the public consciousness in the late '90s by the FDA approval of Viagra and those commercials with Bob Dole, erectile dysfunction means that a man can't get or sustain an erection in the way he'd like to in order to have sex. Fifteen percent of men over 70 have ED, but even those who don't may find that time has changed the way their captain salutes the flag.

As men age, their erections often become softer — and also may not last as long as they used to. This is typically due to decreased testosterone production, as well as decreased blood flow, which is often tied to age-related illnesses like high blood pressure or clogged arteries. However, softer erections aren't a given — men who aren't suffering from any illnesses that impact their blood flow may have a lifetime of stiff stiffies to look forward to.

Most of us lose some height as we age — and it turns out that that is true of your pal John Q. Underpants, as well. But don't freak out — as Dr. Madeleine Castellanos told Grandparents.com (yes, that's a thing), the average age-related penis size change will be around one centimeter of lost length, which occurs due to lower testosterone levels and blood flow issues. There's a lot of debate about whether size matters at all, of course, but I think we can all agree that one centimeter is not going to make or break anyone's sex life.

However, penises can appear smaller due to weight gain in the stomach area directly over the penis. This can cover a bit of the base, making it appear smaller. But don't worry, people — it's still there!

According to the Sexual Medicine Society of North America, Inc., testicles can get smaller as a man ages, shrinking by up a third in size. This could be the culprit behind the famous "saggy balls" found on many elderly men — when shrinking testicles team up with aging skin that has lost elasticity and decreased muscle mass, you have a recipe for some serious low-balling.

Men who are deep in andropause can certainly still produce sperm (just ask your one friend who has siblings 20 years older or younger than them), but age-related changes do lessen sperm output. Sperm cell production slows down, and the tubes that carry sperm through the genitals harden and become less elastic, making it harder for sperm to pass through the body and out onto whatever may be waiting for it. However, dudes can (and have been known to) emit some fertile sperm until the ends of their lives.

The drop in testosterone production that older men experience is sometimes also tied to a drop in libido — however, that's not the whole equation. Male testosterone levels hit their peak when a guy is in his teens, and begin to slowly drop from there on out, falling a bit more sharply after a man enters andropause.